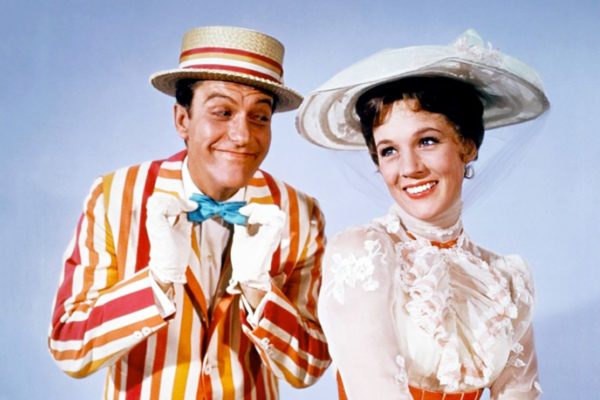 You’ve probably seen Mary Poppins, Robert Stevenson’s 1964 Academy Award-crushing blockbuster (starring Julie Andrews) about the OG British super-nanny who, through magic and charm, transforms the lives of a couple precocious children in a dysfunctional family. (If you haven’t, we recommend a teaspoon of sugar.) This Friday at 7:30p, Rivertown Film will host a sing-along screening (appropriate for all ages) at Nyack’s Artopee Way Drive-In (aka Nyack Municipal Parking Lot at Artopee Way). Admission is free and popcorn is a mere tuppence a bag.
The Artopee Way Drive-In Presents MARY POPPINS.
Directed by Robert Stevenson
With Julie Andrews and Dick Van Dyke
1964, USA, 139 minutes

“Julie Andrews’ first appearance on the screen is a signal triumph and she performs as easily as she sings, displaying a fresh type of beauty ” – Variety(1964)

“The sets are luxuriant, the songs lilting, the scenario witty but impeccably sentimental, and the supporting cast only a pinfeather short of perfection.” – TIME (1964)

…a word most commonly associated with the movie Mary Poppins, was first attested in the 1940s.
The roots of the word have been defined[3] as follows: super- “above”, cali- “beauty”, fragilistic- “delicate”, expiali- “to atone”, and -docious “educable”, with the sum of these parts signifying roughly “Atoning for educability through delicate beauty.” According to the film, in which the word gained its popularity, it is defined as “something to say when you have nothing to say”. However, it is commonly defined as “extraordinarily good” or “wonderful” as all references to the word in the film can be perceived as positive. Dictionary.com also notes that the word is “used as a nonsense word by children to express approval or to represent the longest word in English. Source: Wikipedia
Note: OF COURSE we know there are no spaces in this word. Spacing has been added for readability.

Sponsored by Nyack Hospital, with help from the Village of Nyack and Festoon.