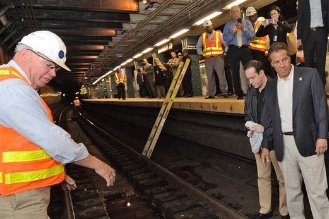 They’re spraying pesticides in Brooklyn and Queens this week, and scouting for puddles in subway tunnels. But Florida’s 29 cases are the only locally-acquired, mosquito-borne Zika infections confirmed to date in the continental US, and a tropical mosquito, Aedes aegypti, transmits the Zika virus.
So why the spraying, the puddle patrols, and the urgent government action here in the Northeast?
Because Aedes aegypti is heading our way, and its cousin is already in our backyard.
Sustainable Saturday is sponsored by Green Meadow Waldorf School, Maria Luisa Boutique and Strawtown Studio.

Over the last 200 years, the African Aedes aegypti mosquito has spread around the world’s tropical belly, living near and feeding on its favored prey: human blood. The biting female is a vector for tropical viruses, including yellow fever, dengue, and chikungunya, which she transmits not only from human to human, but to the 500 offspring she produces during her scant four-week lifetime. Now, Aedes aegypti is in the news for spreading another virus, first discovered in 1947 among rhesus monkeys in Uganda’s Zika Forest.

Out of Africa to Brazil

Zika spread slowly and quietly from Africa to Southeast Asia, and then on to the South Pacific Islands in the mid 2000s; it first attracted notice there in 2007. Researchers suspect that Zika was then carried to Brazil by Tahiti’s soccer team and their fans during the 2013 Confederations Cup.
Until 2015, Zika was considered a relatively mild tropical arbovirus (arthropod borne virus: spread among animals and humans by insects like mosquitos and ticks), with about 80% of its victims staying symptom free. Most others show only minor flu-like effects, such as fever, rash, joint pain, conjunctivitis (red eyes), and possibly muscle pain and headache, lasting anywhere from a few days to a week, according to the US Centers for Disease Control and Prevention (CDC). 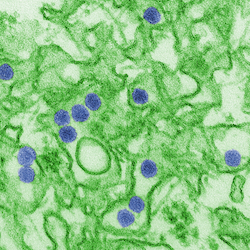 Digitally-colorized transmission electron micrograph (TEM) of Zika virus, which is a member of the family Flaviviridae. Virus particles, here colored purple, are 40 nm in diameter, with an outer envelope, and an inner dense core. Image: CDC

In an equatorial world mostly lacking air conditioning and screens, Aedes aegypti follows its human hosts indoors, where it breeds in flower vases, half-empty water glasses, toilet tanks and on wet shower floors. With most victims asymptomatic, and with no herd immunity from vaccine or previous infection, Zika’s epidemic spread in Brazil was unstoppable.

From Brazil to Florida

The first Zika warnings for Brazil were issued by The Pan American Health Organization (PAHO) in May 2015, but it was in the six-month run up to this August’s Rio Olympics that the epidemic, with images of brain-damaged babies, grabbed the world’s attention. There was a tenfold increase in newborns with microcephaly (abnormally small skull), and an emergency response plan was subsequently formulated for the Brazilian outbreak by the World Health Organization and PAHO. Pregnant women were warned of the risks, which multiplied with recent confirmation that the virus can also be transmitted sexually, or by blood transfusion.
Zika virus is now active through South and Central America, Mexico and the entire Caribbean, including US territory Puerto Rico, which reported its first case in December 2015. In areas of the continental US with large Latin-American and Caribbean populations—like the New York metro area—Zika-infected adults and children are now returning  from summer family visits to these stricken countries and islands. Despite intense public health education, there will inevitably be sexual transmission of the virus. But it’s Aedes aegypti’s northward march, and its cousin in our neighborhood, that are keeping Zika-focused US health officials up at night. 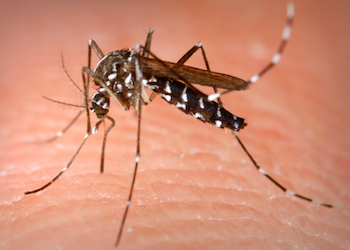 The Asian Tiger mosquito arrived in Texas (most likely) in the 1980s, as a stowaway in used tires from Asia. It’s been spotted as far north as Massachusetts, and is easy to recognize with its white stripe markings. Aedes albopictus–the white-painted pest–likes both animals and people, and, like Aedes aegypti, dines on them aggressively during daylight hours. It is suspected of carrying yellow fever, and is a known vector for encephalitis, heartworm in dogs, painful chikungunya virus, and dengue fever—a close genetic relative of Zika.
Infectious disease researchers know that Aedes albopictus has transmitted Zika in Africa and Southeast Asia. Can it spread Zika here? Though not yet proven, it’s likely–and you’re now being asked to join the battle to keep this invasive arthropod at bay.

In 1999, Queens, NY saw the first US outbreak of mosquito-borne West Nile Virus (first isolated in the West Nile Province of Uganda in 1937). The disease killed seven people, and since then it has spread steadily throughout the US, with tens of thousands of cases, and more than 2,000 deaths. West Nile mosquito-control efforts have included pesticide spraying, along with public education—now renewed and redoubled—about standing water.

Aedes mosquitos breed quickly and copiously in still water—in discarded tires, in subway track puddles, in a bottle cap. The public health goal is to eliminate every instance, from industrial sites to your clogged gutters, neglected birdbaths, watering cans, outdoor toys, the kiddie pool that blew over in a rainstorm, that pile of metal you’ve been meaning to take to the scrapyard, . . .  Even a windowsill flower pot saucer could hold enough rainwater to breed thousands of mosquitos.
If standing water, like open-top rain barrels and ponds, can’t be eliminated or covered, there are larvicides, biological  “mosquito dunks,” and natural predators to combat mosquitos.

Fish, like this fathead minnow, can gobble up mosquito larvae. Photo: RCDOH

As long as they aren’t used by breeding amphibians, ponds should be stocked with fish who will feast on mosquito eggs, larvae or adults. Fathead minnows can be added to any standing water—even a rain barrel— that is at least 8 inches deep. (Rockland County gives the minnows away free one day each year.)
Attracting mosquito-eating birds to your property with natural sources of food will add another line of defense. Waterfowl and dragonflies, if you have the right landscape for them, will eat mosquitos and larvae. Bats eat a variety of insects, including mosquitos; invite them with a bat house placed high up on your house wall. (Be patient: it may take a year or more for a bat family to find it.)
And the next time you want to knock down a spider web on the porch, think again. A mosquito that flies into it won’t live to bite you.

In New York’s Rockland County, the Department of Health is focused on eliminating mosquitoes in their aquatic stage. “The county conducts larval inspections at high risk facilities, such as landscape and maintenance yards, nurseries, tire facilities, etc,” said RCDOH Environmental Health Specialist Amy Isenberg. “We also respond to residential complaints and we have just completed an aerial surveillance of the Rockland County to identify properties that appear to have pools that are not being maintained.”
But RCDOH can’t do it alone. “We need residents to check their property for ANY items that can hold water,” says Commissioner of Health Dr. Patricia Ruppert. “Even small items, such as drinking cups or soda cans, can produce mosquitoes. Get rid of the items or empty the water out and scrub the inside of the item at least once a week,” she says. And go ahead, peek over the fence into your neighbor’s yard. If you see something, say something, or leave this handy anonymous note.

The CDC (and every other public health organization) recommends long sleeves and long pants when out in the daytime, along with an insect repellant. DEET (N,N-Diethyl-meta-toluamide) is touted as being the most effective, but comes with warnings of side effects when used in too-great concentrations, or on small children. The CDC also recommends repellants with picaridin, IR3535, oil of lemon eucalyptus, or para-menthane-diol as the active ingredient.
Check and repair screens and block holes around air conditioners.  And because it can take just five days to go from mosquito egg to flying terror, standing water inside the house, like flower vases, should be changed frequently. Add some bleach to the tank of a rarely-used toilet.

The first, small-scale human trials of a Zika vaccine began in early August, according to Dr. Anthony Fauci, Director of the National Institute of Allergy and Infectious Diseases (NIAID). In a recent video interview with the Washington Post, Fauci said that, although vaccine development has been moving along quickly, the number and scope of human tests that remain to be done would not be completed, or a vaccine made available, until early to mid 2018— and that’s in the absolute best case scenario.

Fauci found funds for vaccine development by shuffling his own budget lines; “Robbing Peter to pay Paul,” was how President Obama put it in a statement directed at Congress last May, when they failed to fund the fight against Zika. (They still haven’t found funding.)

The future of Zika? 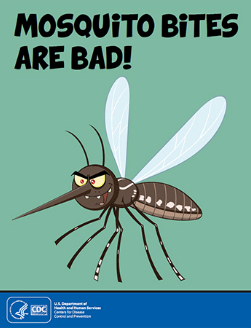 A warmer climate in our region, with long hot spells, droughts, and massive drenching rainstorms, is creating good breeding and survival conditions for mosquitoes like Aedes albopictus, as well as Aedes aegypti, which has been moving north through the mid-Atlantic region. Mosquitos are the world’s deadliest animal, killing about one million people per year–about half of those from malaria. A larger range for tropical mosquitos and arboviruses constitutes a real public health threat in the US. This doesn’t mean you should panic; but it is a call to arms.
In response to growing pesticide resistance, the British company Oxitec answered the call with a genetically-modified male (i.e., non-biting) Aedes aegypti mosquito that passes on a “death gene” to its offspring. Brazilian and other Latin American municipalities are using this technique, and some have seen a 90% reduction in the Zika-bearing mosquito’s population. Field trials of this GMO Aedes aegypti have been approved by the US Food and Drug Administration. But a proposed trial in the Florida Keys is opposed by a large and vocal group of residents who fear a cascade of unintended consequences.
Meanwhile, although the World Health Organization believes that only a fraction of Zika babies will suffer severe birth defects, it’s  becoming clear that microcephalic babies exposed to their mother’s Zika virus show much more profound brain damage than usually accompanies this anomaly. 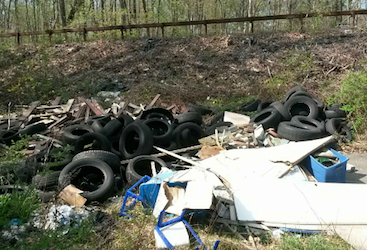 And a new worry has recently surfaced. Some researchers fear that Zika may cause previously undetected brain injury or learning disabilities in some infected children and adults, and that the incidence of serious neurological aftereffects, like the acute paralysis of Guillain-Barré Syndrome, may be more frequent than is currently thought.
Public health officials are girding for a two-front battle against sexual and mosquito-borne transmission. If Zika takes off in the continental US, it will take money, and lots of it, to pay for education, medical treatment, vaccine development, insect repellants, mosquito trapping, testing and eradication, human test kits, pre-natal diagnostics, and intense extended care for severely handicapped children.
And the soul-wrenching dilemma faced by pregnant women who test positive for Zika?
Well, let’s just get out there and fight off these mosquitos.
Learn more:

The New Yorker on the development of a Zika vaccine