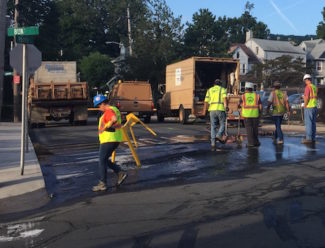 “We’ve been working on it, but the problem is we’ve had to replace another valve,” Nyack Water Department Superintendent Harry Williams said on Tuesday. “We’ve repaired three valves and we’re working on it now. Unfortunately, a lot of valves are breaking down there. The problem is the age of the valves. (One was dated 1898.) We try to close them and then sometimes when we’re working on them they break. It’s sometimes a domino effect. We actually broke another valve [on Tuesday]. It’s a process of elimination.”
On August 17, three valves were still leaking: on Gedney approaching Main Street; on Main Street by the John Green House; and on Piermont at Burd St.
Last month, Rockland County Executive Ed Day declared a Stage II Water Emergency because New York was in the midst of a minor drought. Though it has rained a fair amount since Day urged citizens and business to declare the water emergency, village officials expressed that they are not happy to be wasting water.
“It’s a lot of water that we treated, and unfortunately will be lost, but it’s not affecting taxpayers,” Williams said. “It’s hard to say [how much exactly], but the leaking valves in question are relatively small leaks compared to a water main break. The water main break that we experienced last weekend on Rt. 59 was well over a million gallons before it was repaired. These leaks, though very visible, and though they do cause concern to the public, are only a fraction of that.”

The Nyack Water Department is continuing to try to fix the valve issue, but according to Williams, “[fixing the leak] is going to take a little longer than we thought because we had to expand to a larger area.” The Water Department has one valve scheduled for repair on Thursday and has scheduled the other two remaining valves for next week. The leaks themselves have not caused customers to go without water, but when the Nyack Water Department makes the repairs they do have to shut water off in the area.
See also: