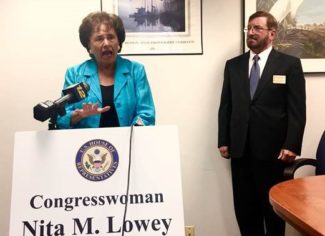 White Plains, NY — On Friday, Congresswoman Nita Lowey (D-NY17), joined by Dr. Robert Almer (Dean of the School of Health Sciences and Practice and Institute of Public Health at New York Medical College), called on Speaker of the House Paul Ryan to immediately reconvene Congress to pass emergency funding to combat Zika virus.
“It is outrageous that, at a time when the deadly Zika virus is spreading within the continental United States, Congress sits on its hands and refuses to provide emergency funding needed for an effective response,” said Lowey, referring to a $1.1 billion emergency funding bill passed by the Senate in May but not by the House of Representatives. “The consequences of this public health emergency are too severe for political gamesmanship.  Speaker Ryan should immediately reconvene the House of Representatives to provide emergency funding to stem the tide of this public health crisis.”

Zika virus, a tropical disease spread person-to-person by mosquitoes, was not prevalent until 2007 when there was an outbreak in the Yap Island in Micronesia; now, according to the World Health Organization, Zika is “spreading explosively” through the Americas.

Lowey’s press conference came days after the Centers for Disease Control and Prevention announced that fourteen people (12 men and two women) were believed to have contracted Zika in a one-square-mile area north of downtown Miami, Florida.
The effects of the virus are “typically mild,” as Dr. Almer iterated; the exception is that “when it hits during pregnancy it can cause permanent damage to the baby,” including brain abnormalities and microcephaly.
However, there is much to be learned about Zika. Scientists are working to learn whether there are links between the virus and nerve problems and whether it is behind neurological complications in adults, such as Guillain-Barre syndrome. “[The] CDC and our local health departments are working hard to prevent Zika from spreading, but there are still many unknowns,” Almer said. “Additional important work must be done to learn everything needed to fully contain transmission of this unusual virus.”
The funding that Lowey called for, as allocated by the Senate bill, would go towards CDC programs, National Institute of Health vaccine research, diagnostic tests for the virus, and aid to Puerto Rico — Puerto Rico has been hit hard by the disease.

It is true that Republicans in the House have not supported the Senate-led bill, but it is also true that Lowey was being a bit deceptive in her Friday news conference and in her press release which followed. She outlined efforts to pass anti-Zika funding as follows:

In February, President Obama requested $1.9 billion in emergency funding to combat the spread of Zika and protect American communities.  In May, the Senate passed $1.1 billion in emergency funding.  Yet nearly six months and 6,400 American Zika cases – including 855 pregnant women – after funding was first requested, the Republican House Majority has not passed a Zika funding bill that can be signed into law.

There are two misleading points in that statement. First, while it is accurate that there have been 6,400 American Zika cases in the past six months, it is worth pointing out that most of those cases were in American territories, not the United States proper. Despite the recent outbreak in Florida, the disease has yet to effect the United States on a large scale; and really, while you hate to see even one person contract the disease, 6,400 people out of the more than 300 million people in the US and its territories comes out to a rather small percentage of Americans affected.
Second, the Republican House Majority has passed a Zika funding bill, though not the one that Lowey and the Senate Democrats had in mind. The bill, passed by the House in late June, would have cut $750 million from other health programs — $543 million in unused funds from the implementation of Obamacare, $107 million from leftover funds used to fight Ebola, and $100 million in administrative funds from the Health and Human Services Department — to fund anti-Zika efforts. Senate Democrats blocked the bill 52-48. According to the Christian Science Monitor, they “took exception with a provision loosening Environmental Protection Agency restrictions as well as another that prohibited funds from being directed to Planned Parenthood and other women’s health clinics.”
What we have here is the negotiation of what is referred to in game theory as a bargaining range.

Each side, the Democrats and Republicans, have optimal outcomes that they would like to achieve — Democrats would like more money to spend on fighting Zika (imagine them wanting to get to p+CB), Republicans would like some of that money to come out of health spending (imagine them wanting to get to p – CA) — but they have a whole range of compromise options that they would be willing to accept (anything in between p+CB and p – CA). So, they try to push the other side towards their end of the bargaining range and make it seem as though their optimal outcome is more extreme than it is in actuality. New York State Democratic Senator Chuck Schumer, for instance, said that the Republicans “got together and put every poison pill in that bill that Democrats couldn’t consent to.” And Republican Rep. Andy Harris (R) of Maryland wrote an op-ed published in The Hill calling increases in funding to Planned Parenthood unnecessary and saying that the failed proposal “actively calls for tight monetary oversight to ensure that taxpayer dollars are being spent appropriately,” equating President Obama’s request for $1.9 billion in February to a “blank check.” Both representatives were essentially drawing lines in the sand for the other party to see. And Lowey on Friday was doing the same thing.
The good news is that though this congress may be lame, assuming that both sides want to combat Zika in some fashion — and it seems like a pretty popular bipartisan initiative — they will find common ground on a funding bill. The question is how long it will take and where on the bargaining range they will settle. According to Secretary of the U.S. Department of Health and Human Services Sylvia Mathews Burwell, time is of the essence: By the end of August, funding for vaccine and diagnostic development, testing, and private sector partnership will be spent, “delay[ing] when a safe and effective Zika vaccine is available to the American public.”  And according to Lowey’s office, “[b]y the end of September, the Centers for Disease Control and Prevention (CDC) will have exhausted its funding for assistance to states, territories, and localities to fight Zika.”
If Lowey is truly worried about “let[ting] vital research on vaccines and treatments for Zika lapse in the wake of local transmissions on our shores,” as she said on Friday, she should accelerate the process by countering the Republicans with specific spending cuts that would not be “poison pills.” Otherwise, we should all be as outraged at her political gamesmanship as we are at the Republicans’.