The southernmost lane will remain shut down until further notice 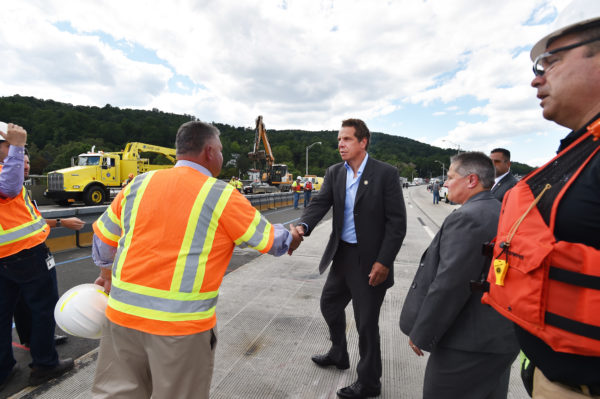 Six of the seven lanes on the Tappan Zee Bridge were reopened at about 8p last night following a mid-day construction crane collapse on Tues July 19. The southernmost lane on the bridge, which which connects Rockland to Westchester via I-87/287, will remain closed for the immediate future due to structural damage. The entire bridge had been shut down while New York State officials cleaned up and assessed the damage done by a construction crane that collapsed across the Tappan Zee Bridge. “It was a new crane performing a routine task. Sometimes equipment breaks and accidents just happen,” said NYS Governor Cuomo. “We’ll know more after [an] inspection.”
The crane that collapsed was one of the 28 cranes installing pilings on the new bridge with a “vibrating hammer.” It was not the “Left Coast Lifter.”

The Traffic Cams Are Back!

During yesterday’s bridge closing, the NYS Thruway turned off the three camera aimed at the Tappan Zee Bridge, leaving only the Eastern (Westchester) and Western (Rockland) approach cameras active. They are back online today. To see what bridge traffic looks like RIGHT NOW, visit NyackNewsAndViews.com/tzbwebcams.

Two construction workers and three motorists were injured, but reports are that all of the injuries were minor. No vehicles were struck by the fallen crane. “The boom collapsed and the damage is significant; the crane is mangled… but luckily, it wasn’t in rush hour and miraculously luckily no one hit the boom and the boom didn’t hit a car and there were no injuries,” said Cuomo. “Really to me that is nothing short of a miracle, because when you see the actual crane and the damage and the damage to the roadway — it really is nothing short of a miracle that nobody was hurt.”
Three lanes will be open in each direction until further notice. Motorists traveling over the Tappan Zee Bridge should plan for extended delays during their morning and evening commutes. Alternate routes include detouring south at exit 15 (New Jersey – I-287 – NJ Route 17 South) or exit 12 (West Nyack – NY Route 303 – Palisades Center Drive).

There is surface damage to one lane which is southernmost lane on Tappan Zee Bridge. It is significant damage and some structural damage.

I suggest using an alternative route if going southbound. Tomorrow we expect to have southernmost lane closed but others open & operational.