Can Green Infrastructure Make a Difference? 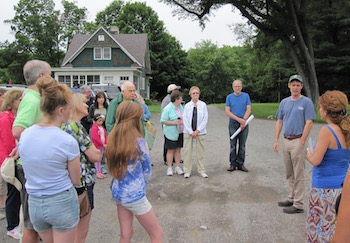 The day was gray but the mood was green at historic Bell-Ans Center of Creative Arts  in Orangeburg, gathering point for Keep Rockland Beautiful’s  “Green Infrastructure” Underground Tour last Saturday.
The tour guide, Orangetown’s three-term Supervisor, Andy Stewart, has a KRB connection, having served from 2001 to 2011 as executive director. At his side was Lawrence Vail, longtime water activist with the Sparkill Watershed Creek Alliance.
As two dozen eco-tourists wait to board a standard-issue school bus, Stewart previews the features on offer: Dominican College’s vegetated swale, a rain garden at Orangeburg Library, home rain barrels and a riparian buffer in Sparkill, and a permeable-pavement parking lot at Lamont-Doherty Earth Observatory.

Green infrastructure uses vegetation and soil to manage rainwater where it falls, unlike “gray” infrastructure, which carries rainwater by pipe to the nearest stream.
The common goal of green infrastructure projects is to keep waterways clean, healthy, and out of your living room, by preventing rainwater —lots of it all at once — from overwhelming streams and storm drain systems. 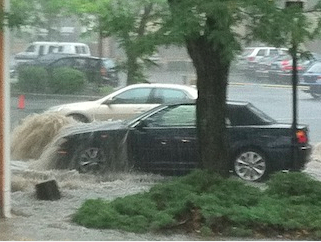 Why is that so important? In Rockland County, sewage and stormwater are carried in separate underground systems, but stormwater infiltrates the old, cracked sewer lines that take the output of your toilet, sink, dishwasher and washing machine to a treatment plant. An overloaded wastewater system can’t keep up with a storm’s sudden influx, and incompletely treated wastewater gets released into the Hudson River, causing a serious spike in bad bacteria. 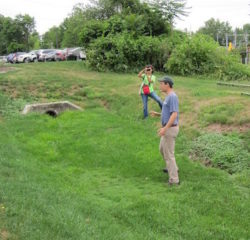 Blauvelt’s Dominican College was the destination, and a ditch next to a parking lot around back somewhere was the first stop.
In green infrastructure terms, it’s a vegetated swale: a drainage ditch lined with grasses and other native plants. It’s designed to catch and hold rain runoff from parking lots, walkways and buildings, and discharge it slowly—in this case, into Sparkill Creek.
“In the old days, everything was a swale,” says Supervisor Stewart, “just a ditch next to a road with water trickling along.” Dominican is going old school and new school, with a carefully-designed system of swales, sand filters and retention basins. “By the time this water gets to the stream, some of it has gone into the ground or been sucked up and evaporated—“transpired”— by the plants, which have also made it cleaner, cooler and slower,” says Stewart.
The swath of native plants and grasses in the swale is also a wildlife habitat. “Hear those birds chirping in the trees?” asks Stewart. “They’re applauding for Dominican College.”

The rain garden: a thirsty mini-meadow 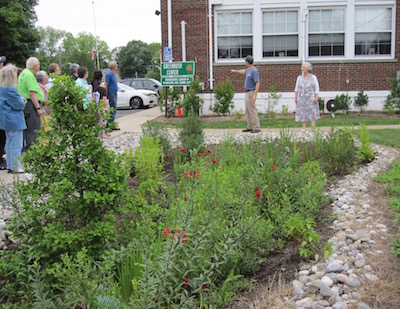 It looks like a sinkhole in a flower garden, but there’s nothing accidental about this green infrastructure project. It’s right up front and center, on the lawn of the Orangeburg Library.
“Imagine this whole roof spilling into that leader pipe, shooting underground into this rain garden,” says Supervisor Stewart.
On the floor at the far end of the oval, a raised drain is ready to to empty the basin to a holding tank below, which lets water filter down into the ground and move slowly to Sparkill Creek, just across busy Route 303.
“It’s not enough dig a hole and put flowers in it,” says Stewart. Like the vegetated swale, “this garden can only do its work by taking that water offline for a little while, cleaning it, cooling it, slowing it down.” 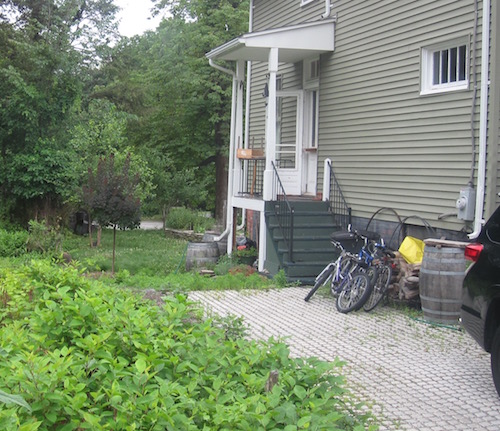 Rain barrels at a Sparkill residence

“One rain garden is a pretty thing that makes almost no difference whatsoever,” says the Orangetown Supervisor, who estimates about a dozen such in the county. “You need hundreds of these, along with rain barrels, vegetated swales, and permeable pavement. It’s just a symbolic thing unless it gets multiplied many, many times,” he says.
The tour bus winds through the village of Sparkill, stopping at a private home with three vintage rain barrels, one providing drip irrigation to a vegetable patch.
“They’re catching as much coming off the roof as possible,” says Stewart, “and saving on their bill, instead of paying Suez to water their garden.” And they’re doing their part to hold back storm water, for cleaner waterways. 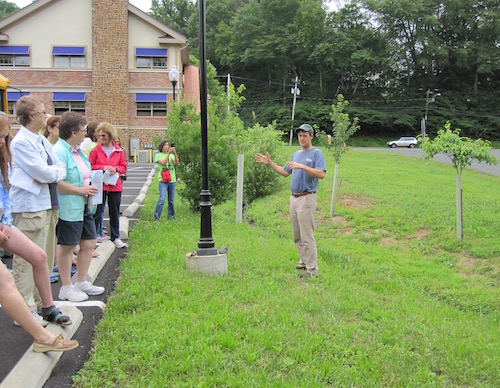 Riparian buffer at a feeder stream in Sparkill

Next stop: a small restaurant parking lot, near a barely noticeable rivulet with a rap sheet of road and building floods.
Water activist Larry Vail worked alongside New York State’s “Trees for Tribs” program when, in 2012, they rolled up with a truckload of free saplings to plant along this tiny feeder of the Sparkill Creek.
“There were no trees or shrubs at all here then; now there are dozens, forming a riparian (stream-side) buffer,” says Vail. This helps clean water flowing from roads and parking lots. It also helps stabilize and strengthen the stream bank, mitigating floods by preventing erosion — good news for the firehouse just downhill. 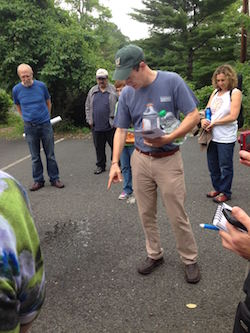 Last stop: an ordinary-looking parking lot on the Lamont-Doherty Earth Observatory Campus off Route 9W.
When Supervisor Stewart empties a bottle of water onto the seemingly-solid black asphalt surface, some dribbles away, but some is absorbed. Larry Vail explains the science of permeable pavement: “This is made of the usual asphalt mix, but without sand, allowing some water to penetrate to the drainage area below.” Andy Stewart explains the economics: “There was no net increase in cost because, by reducing water runoff, they saved money and space on their swale and storm drain.”
And instead of dragging parking lot grime and grease along, water from this lot is cleansed by gravel before returning to the groundwater system.

The tour returns to Bell-Ans for a reception, and Supervisor Stewart makes it clear that all this just a start: “This town has strict regulations regarding runoff, but what we don’t have yet is incentive to do better — to get developers to think creatively about their space,” he says. 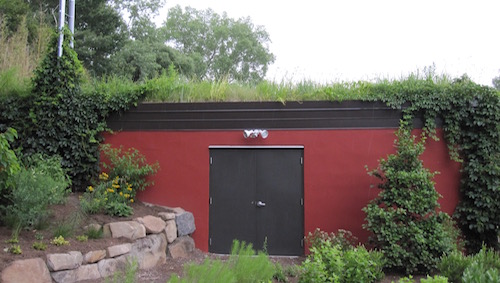 Not all that far from Orangetown there are robust green infrastructure programs well underway.
Upstate Onondaga County’s Save the Rain and Philadelphia’s aggressive Green City, Clean Waters initiatives have government and citizens working together to reduce pollution and flood risks.
A growing number of municipalities, like the Village of Nyack, are adopting more stringent green infrastructure provisions than their towns and states require, and are offering juicier incentives in their local codes, like density bonuses in exchange for green roofs, permeable pavement and similar projects. 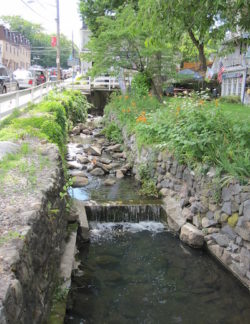 Village Planner Bob Galvin notes that before green infrastructure incentives were written into the Nyack code in 2014, developers balked at the expense of rain gardens and such. But since then, they are keen to go green. “The new development at 263 Main Street (site of the former Sew What’s New) will have permeable pavement parking lots, and rain gardens along Depew Avenue,” he says.
Drazen Cackovic, principal at DCAK MSA Architecture and Engineering in Nyack, ticks off several green infrastructure features for the Pavion site, between Cedar Hill and Hudson Avenues, slated to begin construction later this year.
“We’ll be ‘daylighting’ about 100 feet of Nyack Brook right here,” says Cackovic, pointing out the window of his Hudson Avenue office, “where all can see and enjoy it.” He added that daylighting projects could help reduce the chance of floods, like the 2011 deluge, most likely caused by a blockage in the brook under Nyack Plaza.
A hefty 3000 square feet of green roof will retain stormwater and help moderate the development’s dwelling temperatures. Parking lots will be 14% permeable pavement, and rain gardens will line Franklin Avenue. 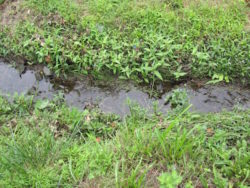 Feeder tributary of the Sparkill Creek, near Sparkill Firehouse

Back in Orangetown, things are looking greener.
Andy Stewart and his Town Hall team obtained over $900,000 in New York State funding for the Homes for Heroes project in Tappan, which will convert six acres of abandoned federal military land off Western Highway into a series of vegetated basins. This will reduce pollution and flooding by treating stormwater before it reaches the Sparkill Creek, a NYS DEC priority waterbody. The town now has ownership of the land, design is underway, and construction is planned for later this year.
Adjacent land is being redeveloped as housing for homeless veterans and as a new location for the county animal shelter. The Supervisor says that both neighbors are looking forward to the cleanup, beautification and walking paths that the town’s drainage project will bring next door.
“A growing community of people are saying that if piece of land is under development, we can do a little better,” Stewart says. “It’s just a matter of kicking the door open, because there are smart people who will run with it, if you do.”

Sustainable Saturday Considers the Power of a Creek

Swimming Lessons: On the Hudson River

Thanks to the Chesapeake Bay Trust for the preview image.