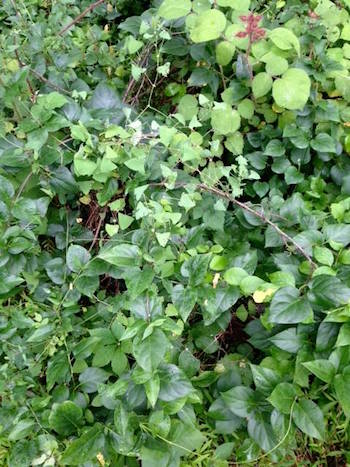 Maybe it looks like just a mess of greens to you, but the problem of invasive plants is a daunting one.
New York is one of the most aggressive states in banning plants that can “escape” the backyard and take over roadside greenways and woodlands. There, they elbow out native plants, and the birds and insects that evolved with them. The result: a changing landscape that threatens pollinators, crops, recreation, the economy, and human health.

Insect imports make headlines when they make us sick — like the Asian Tiger Mosquito — or chomp away at our trees and gardens, like the Asian Longhorned Beetle, and the Gypsy Moth (thank you, France). Invasive animals have been causing well-publicized problems for years — like Asian carp in the Great Lakes, among many others.

But it’s the green invaders that we see every day on roadsides, hiking trails, beaches, boat launches, empty lots, commercial property, and even our own backyards, that we can all do something directly to address. And that’s the focus of New York’s third annual Invasive Species Awareness Week, July 10-16.

Who invited these invasive plants?

Some arrived here hundreds of years ago, with the original colonists, as stowaways or deliberately packed for food and medicine. Botanists in the 19th and 20th centuries imported garden ornamentals from all parts of the world — especially Asia — enchanted by their good qualities and blind to their bad behaviors.
With booming Asian trade today, insects and plants can make the trip hidden among packing materials. When released into the wild, they grow unchecked with no natural enemies, choking out native flora, wrecking woodland soil, and erasing a vital part of the food chain for our wild creatures.

How bad can it get? Giant Hogweed and Japanese Knotweed 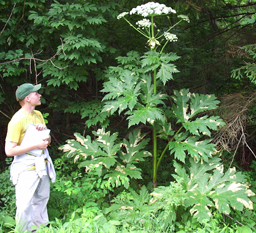 Southeastern states have been economically and environmentally walloped by Japanese Kudzu (“the vine that ate the south”), but there are plenty more where that came from. Two Victorian-era garden imports are causing hair-pulling distress, and both seem designed for world domination.
Here’s a plant right out of a Sci-Fi movie — currently spreading havoc in upstate New York. The aptly-named Giant Hogweed (native to Russia), can grow upwards of 15 feet tall, and its horror-movie looks are matched by its toxic punch. Contact with the sap can cause first degree burns and even blindness. Eradication is extremely difficult, with seeds staying viable for up to seven years. If you see it, stay away and contact the NYS DEC who will send out a hazmat-clad strike force deal with it.
Ultra-aggressive Japanese Knotweed, can also burn you — in the wallet. It escaped cultivation quickly in the 19th century, and spreads easily via underground rhizomes. Wiping it out at home is difficult, expensive,  and requires professional guidance. In the U.K. and some parts of the U.S., you’ll want to expunge this invasive plant at all costs before trying to sell your house. 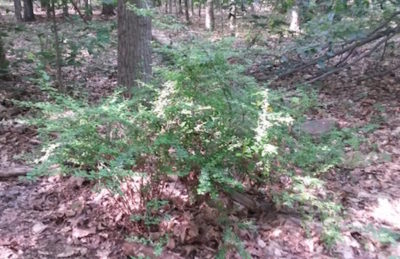 In 2005, New York State started looking for ways to bring government agencies, private organizations and concerned citizens together to fight off invasive species of all kinds. The result was eight regional PRISMs. Linda Rohleder, coordinator of the Lower Hudson Valley PRISM, works with a long list of partner organizations to get the word out to gardeners, landscapers, and just plain everybody, about plants that can harm the environment and the economy, — and what to do about it.
Their free “Blockbuster”  classes train volunteers to recognize and report on invasive plants. Knowing what’s moving in, where, and how much, helps PRISM create a strategy of education and eradication action. “Most of what we do is focused on the newer invaders. We don’t normally deal with widespread, established problem plants,” — like the ubiquitous roadside brigades of Japanese Knotweed. “But we can have an effect on some of the newer invaders,” she says. “It’s triage: you have to pick your battles.” 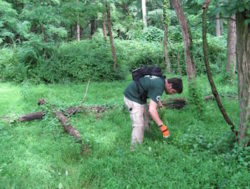 One such picked battle is underway now, right in our neighborhood. The Palisades Interstate Park Commission’s Mile-a-Minute Project of the Hudson Valley is working to wipe out a super-fast-growing imported garden escapee that smothers everything in its path, before the invasion gets beyond all control.
The project oversees parkland within a 90 minute radius of its office at the Trailside Zoo at Bear Mountain. Coordinator Christine O’Neill organizes Mile-a-Minute “pulls,” networks with local governments to educate about the nuisance climber, and collects data for New York’s I Map Invasives database.
Mile-a-Minute pulls out of the ground with an easy yank, but that’s less than half the solution. Like Giant Hogweed, MaM’s seeds stay viable for up to seven years, so even if pulled in time, last year’s seeds are still lurking. 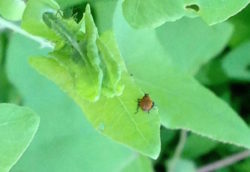 To help with this tricky task, an anti-Mile-a-Minute biocontrol agent — a tiny Asian weevil — was painstakingly tested by the University of Delaware, and released in 2009 to many sites, including Clausland Mountain in Blauvelt State Park, to munch the noxious vine into oblivion.
Since then, MaM Project workers have been going back to monitor the release sites. Progress? “We release more weevils once a year to supplement the population, and we keep taking measurements,” says O’Neill. “So far, it looks good — there’s some significant damage being done here.”

What can you do about invasive plant species?

Mile-a-Minute Project pull: before and after. Photo: Michael Adamovic

Control your property, no matter how large or small.
Nyack’s Sustainability Coordinator, and landscape designer, Marcy Denker says that the key is education. “The NYS DEC has an illustrated list of prohibited and regulated plants, and there’s also a great list of recommended native alternatives, both very useful for the basic garden,” she says.
“Really what it comes down to is that we have got to pay attention,” says Denker, who reported a 2009 Kudzu outbreak on and near her property in Nyack, and watched DEC shock troops eradicate it.
Invasive species have the full attention of the Rockland Cornell Cooperative Extension in Stony Point, where Horticulture Community Educator Anne Christian-Reuter heads up the outreach and education effort. They present public programs on invasives, and, in partnership with PRISM, produce training materials and a most-unwanted list for Blockbuster surveyors of local pests — like Multiflora Rose, Wineberry, Garlic Mustard, Japanese Stilt Grass, and several more from the DEC’s prohibited list.
The Rockland CCE are regulars at the Nyack Farmers’ Market, and will be there on Thursday July 14 to raise awareness about invasive species. Christian-Reuter hopes you’ll reach out to them then, or any time. “Our mission is to notify the public and get them to understand this issue,” she says, “and we’re well equipped to do that.” 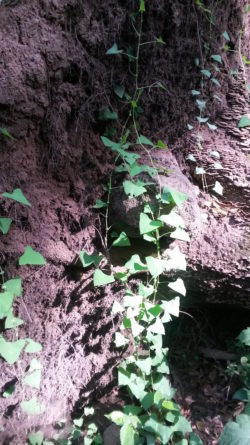 Nyack’s Laura Pakaln is “addicted” to an area of Clausland Mountain where she pulls Mile-a-Minute on her own, or “dragging my husband along when I can,” she says. Hook Mountain’s troublesome Black Swallow Wort — which lures Monarch butterflies to lay eggs, then starves their larvae — lures her back as well.
The Vine Brigade at Blue Rock School in West Nyack spends many a “sweaty Community Work Day,” according to Development Director Beth Norman, trying to rid the campus of harmful invasive plants
And after ten years, Laurence Pringle of West Nyack, who cares for his own native woodland garden, is still holding off Mile-a-Minute at twenty different sites in Blauvelt State Park:

The fateful day was June 10, 2006. I attended an information session at Bear Mountain about an invasive plant called Mile-a-Minute and then attendees pulled the plant on Iona Island.
Soon after, Lamont-Doherty Earth Observatory’s Margie Turrin led a group of volunteers to a MaM site on park land along Tweed Boulevard. I was hooked, and have tried to defend North Tweed’s edges ever since.