“And where were you on the Fourth of July, 1919?” reads the description accompanying a panorama photo taken on South Broadway in Nyack almost 100 years ago. It was a time before Instagram, selfies, the Internet, texting…and digital photography. Returning soldiers marched in the streets of Nyack to celebrate the end of the ‘War To End All Wars.’
“If you lived in Nyack and weren’t in this picture, then you couldn’t have been observing the day with the proper patriotic interest,” continues the photo caption. The panorama, created by Norman A. Burke on July 4th 1919, is part of the Nyack Library local history collection online at HRVH.org. “The picture was taken during the first Independence Day celebration in Nyack after the end of World War I when the village’s servicemen had returned to civilian life.”

Click to see full size view of this panorama. We know this scrunched up version doesn’t do it justice. 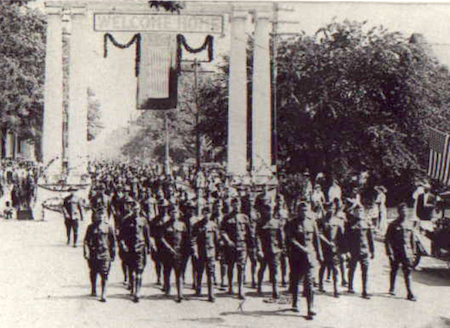 Ranks of soldiers are marching through a large columned archway (Arc de Triomphe) on South Broadway in Nyack. The arch has WELCOME HOME written on its crossbar. Source: Nyack Library via HRVH.org

The Nyack Libary can be seen in the photo in the background. It was shot from an empty lot opposite the library where the Nyack Post Office now stands. The right side of the panorama includes an “Arc de Triomphe” erected for the occasion above South Broadway.
On the bottom edge of the panorama the words “July 4, 1919 World War Veterans.” Not World War I. Just “World War Veterans.”
The 44-inch panorama was shot by the late Norman A. Burke.  Sydney P. Bradshaw acquired it at an auction and it was subsequently published in the Rockland Journal-News on July 4th, 1965. 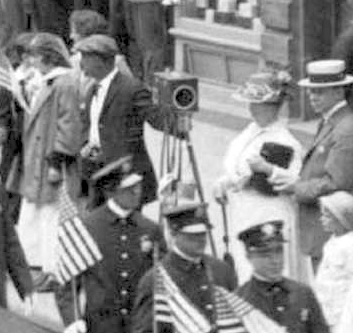 Box camera used to photograph the July 4th 1916 Independence Day Parade on Main Street. This image is an excerpt from a larger photo posted at hrvh.org.

The next time you whip out your cell phone to snap a selfie, remember that a roll of film for a Kodak box camera cost a little less than $30 at the time these photos were taken. Baby boomers can still probably remember their parents caution “don’t waste film” while growing up in the 1960’s.
The 1919 panorama might have been taken with a “box camera,” which were popular in the early part of the 20th century. The box camera seen in this photo (left) was used to capture the 1916 July 4th parade on Main Street in Nyack.

Wikipedia says: “A box camera is a simple type of camera, the most common form being a cardboard or plastic box with a lens in one end and film at the other. They were very popular in the late 19th and early 20th centuries. The lenses are often single element designs meniscus fixed focus lens, or in better quality box cameras a doublet lens with minimal (if any) possible adjustments to the aperture or shutter speeds. Because of the inability to adjust focus, the small lens aperture and the low sensitivity of the sensitive materials available, these cameras work best in brightly lit day-lit scenes when the subject is within the hyperfocal distance for the lens and of subjects that move little during the exposure. Eventually, box cameras with photographic flash, shutter and aperture adjustment were introduced, allowing indoor photos.”
Source: Hudson River Valley Heritage, Nyack Library collection hrvh.org
See also: 150 Years Ago In Rockland…
In this article:independence day, July 4th, panorama, parade, photography, South Broadway, world war I