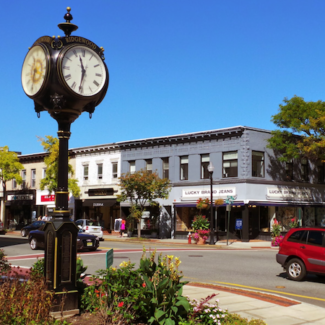 A friendly village with coffee and ice cream hangouts, a bustling downtown with great restaurants that is a cycling and a tourist destination. Sounds like Nyack — but that description also fits Ridgewood, NJ, too. Nyack native and recent NHS graduate Peter Henry offers this ‘compare & contrast’ of these two suburban NYC villages.

by Peter Henry
Nyack is special. Or, at least, so I think. I’ve grown up in Nyack, and ever since I can remember – perhaps because of some combination of the village’s diversity, its proximity to New York City, and its vibrant arts scene – Nyack has felt sui generis. Recently, though, I’ve been wondering whether Nyack is one of a kind, or if, perhaps, there are other towns and villages, far or near, that offer a similar package, and to which residents have similar feelings. So, I went to Ridgewood, a quaint, charming village in Bergen County, New Jersey.
I was first introduced to Ridgewood three years ago by Kelly, a friend who lives there. Recently, she took me around again.

Ridgewood might be a friendly place, but you won’t get the time of day from this mail carrier. That’s because he’s a statute. Really.

Kelly took me to the Ridgewood Coffee Company, which has three huge spiraling funnels, slowly dripping the beverage, prominently displayed in the window. The first thing I noticed was the great variety of machinery; it was like a coffee laboratory. The Ridgewood Coffee Company is a Ridgewood fixture and, I hypothesized, may be one of the reasons so many people who I met were so friendly.
As we walked down East Ridgewood Avenue we came to the local post office. There’s a memorial in front of it, a metal statue of an everyday postal worker wearing a real uniform, hat, and watch, holding real papers, with a pencil in his mouth, and a full mail bag slung over his shoulder. (It’s easy to mistake the statue for a real person.)  It’s also a memorial to a tragic event that long time residents still remember, a gruesome 1991 attack at the Ridgewood Post Office. One of Nyack’s darkest days occurred only 10 years earlier during the 1981 Brinks Robbery, a tragedy marked by a memorial at the Main Street entrance ramp to the NYS Thruway. 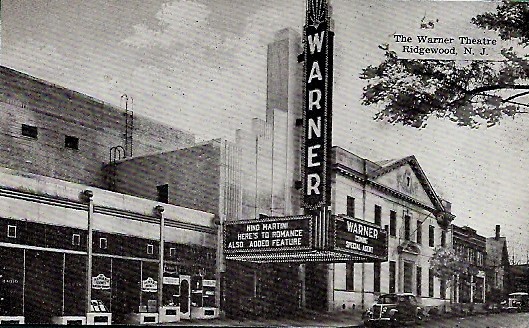 When asked if there are any places that hold a special place in her heart, Kelly told me about the Graydon Pool near the center of town, which she would go to as a child. “I would see my two best friends at the time. We would go there after camp every day, then go to the local ice cream shop in town. I have so many great memories of that place.” The ice cream shop is Van Dyk’s Ice Cream, which has won a multitude of awards for its homemade treats.
And like in Nyack, many historical buildings are peppered throughout Ridgewood. The Bow Tie Warner Theater, for instance, is a classic-looking movie theater that’s still running. Elsewhere, there is a lookout from which, on a clear day, you can see parts of New York City.  These places give Ridgewood an almost fantastical undertone, especially with unassuming townsfolk cheerfully walking through the village, enjoying day to day life.
I was struck by one architectural juxtaposition between the two villages: In Nyack, every building on Main Street basically has a uniform structure; the stores’ operators add a unique color, design, and style to make the storefronts their own. In Ridgewood, the structure is radically different from one building to the next. There are pristine newly-built structures next to, for instance, a hole-in-the-wall magic gift shop. Many of these buildings seem like real-life versions of something you would find in a toy set depicting a model village. In Ridgewood, like in Nyack, architecture is integral to the village’s character. Ridgewood has its own look. 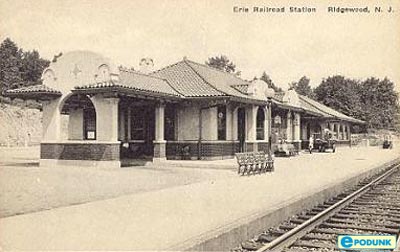 Ridgewood has something that Nyack residents might envy: a train station. One of the aforementioned historical buildings is a still-operational train station (built in 1916) that takes passengers to and from Manhattan each day. Ridgewood is about an hour from Manhattan, and the majority of its working citizens are commuters. Younger people, too, make use of the train. “The train gives you two completely different environments to be in. I can go into the city, have lunch with friends, and come back to the quieter, small town that I call home,” Kelly told me.
And for residents who don’t want to travel to such a different setting, there is the Dunkerhook path — a bike path also known as the Saddle River Area Path for how it travels along the Saddle River — right next to the village’s local duck pond. Kelly explained that “this path leads to other Duck Ponds and rivers in towns nearby, such as Glen Rock or Ho-Ho-Kus.” Kind of like how Nyack’s Hook Mountain connects to Haverstraw, I thought, realizing the importance of such paths. Without these connecting paths, there would be a widespread feeling of isolation; these connections to nature are both comfortable and sustainable.

The people and schools

When I arrived in Ridgewood, it was clear that this was an environment full of compassion. The overt friendliness may have to do with the education system of Ridgewood. “There are six different elementary schools, and based on where you’re placed, you build bonds with many of the students in this smaller environment. There are then two different middle schools where you integrate even more, and make many new friendships that last throughout your time. There’s only one high school, so by the time you arrive, you’ve already made many close friendships, and are still able to create new ones with anyone you may not have met. This leads to the entire village being so close with one another, and these friendships really do last a long time.”

In this article:Like Nyack, Not Nyack, Ridgewood