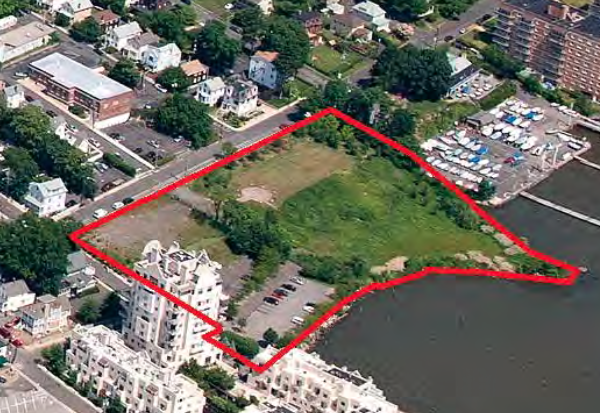 Nyack, May 11 — It’s T-minus 24+ hours to TZ Vista time for the Nyack Village Board. The 7:30p May 12 meeting at Village Hall will be the big one, the Super Bowl of Village Board Meetings, a polestar to local pugnacity, a potential inflection point in Nyack’s infrastructure, economy, and, yes, that elusive and perhaps indefinable but very much paramount descriptor, character. If you’ve been paying attention, you know what’s on the line. If you haven’t, EVERYTHING IS ON THE LINE.

What is EVERYTHING?
It’s a story about two stories — in the opinion of some — too many stories. Nyack resident John Gromada, whose house is a short walk from the proposed TZ Vista Nyack waterfront development, says that giving a green light to development would enable “the further ‘Clermontization’ of our waterfront.” It’s a reference to the Clermont Condominium sited where Main Street meets the Hudson River — apartments that long time Nyacker’s intensely dislike, but Clermont apartment owners don’t seem to mind and have been willing to pay as much as $950,000 per unit.
The Nyack Village Board decided to set aside a proposed text amendment from the developer last fall which would have allowed construction of a six story condo. The Trustees then decided to write their own text amendment with input from the community and from outside consultants. The proposed new rules would permit waterfront development to a maximum height of 35 feet — or, by special permit — 52 feet (five stories) as long as special as several special conditions are met. For each five-percent reduction of maximum width, the maximum height can be increased by five feet.
Meanwhile, 2016 was one of the hottest winters on record…at least as far as the TZ Vista project was concerned. The Nyack Waterfront Watch, a citizens group with whom Gromada is associated, sent a mailer to Nyack households citing their continued opposition to the project and their dissatisfaction with the revised text amendment. Nyack’s trustees responded to the mailer with their own Fact vs Fiction rebuttal of the criticisms.
Although opponents have tried to rally support against what they describe as “high density development” of about 130 units in the proposed five story building that will be shorter than adjacent apartments, there’s not a lot the village can do to stop the project. It’s private property and the existing code permits construction of at least a four story building without any variance.
The property in question on Gedney Street near Main Street is a mostly remediated former Superfund site which is now fenced off from the public.
Nyack officials say that passing a text amendment gives the village more influence over the design and possible amenities like a public park, shops and underground parking. “What we want is some serious park land on the water (30 feet wide); we want a café right there; we want a parking garage so all the cars are underground and not visible; and we want to have more control over design so they fit aesthetically,” says Village Board member Doug Foster.
See also: