Here Comes The Sun is more than a classic Beatles song. For New York State, the Village of Nyack and community volunteers, it’s also a call to action – and to economize — on energy usage. Solarize Nyack, a joint local and New York State effort that’s part of the three-year Sustainable Hudson Valley program, offers discounts to residential and commercial customers to expand clean energy. There’s a community workshop on the program for Rockland County residents on Wed May 4 at Orangetown Town Hall and May 17 at The Nyack Center. Consumers who want to take advantage of the negotiated discount need to register for a free site assessment by June 30. Here’s the first part of a two part series on local and state efforts to use free energy from above to cut costs and greenhouse gases. 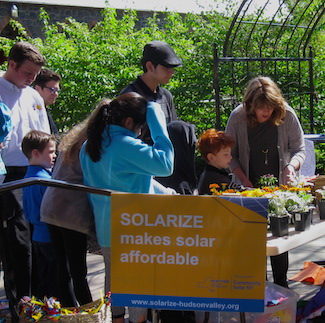 Annie Hekker crouches down on the Grace Church garden path, and sets out half a dozen green plastic bugs, each with a solar-cell carapace. They wiggle and jump in the bright sunshine, and the Sunday School kids, out celebrating Earth Day, gather around.
Before the oohs, aahs and curious questions can start, Upper Nyack Elementary fifth grader Augustus Ashley-Wieners recites the solar energy facts he learned from his science teacher. The 11 year old sums it up neatly: “If we can save money on our electric bill, and send clean energy back to the power company, why not?”
The outreach event at Nyack’s Grace Episcopal Church on April 24 was part of the Solarize Nyack program, which runs through June 30. It’s part of the nonprofit Solarize Hudson Valley, a three-year partnership between Sustainable Hudson Valley and Catskill Mountainkeeper’s RenewableNY program, funded by the New York State Energy Research & Development Authority (NYSERDA).
This community campaign for Nyack and Rockland County teams local volunteers with selected contractors to increase awareness about the benefits of solar power for homes and businesses. Workshops and outreach programs are held to give residents the information they need to decide whether or not “going solar” is right for them. The program keeps prices down through group purchase discounts and by choosing installers whose businesses have met the program’s stringent requirements. “Solarize has been helping us figure out how to get people to meetings, how to spread the word about energy efficiency,” says Marcy Denker, Nyack’s Sustainability Coordinator. Denker is also driving force behind Nyack’s Sustainability Action Plan. “We are working to build more awareness and a sustainability network in Nyack,” she says.
Solarize’s goal of increasing residential and commercial solar power installations supports NYS Governor Andrew Cuomo’s ambitious “moon shot” target of 50% renewable energy in New York State by 2030.

How We Got To Now

The first solar-powered engine was displayed at the 1878 Paris Universal Exhibition, and by 1900 many homes in California and the Southwest had solar water heaters. But most baby boomers first heard of solar as a power source for 1960s communications satellites like Telstar.
The number and efficiency of solar panels in the U.S. has increased steadily, if slowly, since then, and the home solar energy industry (like other types of home improvement) has sometimes been marred by less-than-honest dealers.
Change ain’t easy — and sometimes the road to solar has been bumpy. Remember Solyndra? The 2011 failure of this taxpayer-subsidized solar energy company was more than a black eye for the Obama administration: it hobbled their entire environmental agenda. On the sunnier side, San Francisco has just become the first municipality to mandate solar panels on almost all new construction. 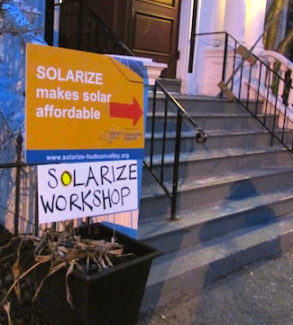 Between Solarize Nyack’s two hyper-scrutinized project installers — Apex Solar Power  and Sunrise Solar Solutions, property owners can choose between rooftop and ground-mounted systems. Installers are available to give advice on which system will works best and whether it makes sense to lease or buy (with or without a low-interest loan) a solar system.
Volunteers, installers and marketing reps that are participating in Solarize Hudson Valley all sing from the same make-the-customer-happy hymnal: if the numbers won’t work, they will discourage a customer from moving forward. For solar to reach critical mass, there needs to be positive word of mouth, and unhappy, dissatisfied consumers will hurt the effort to get more sun power online in New York State.

The Sun Isn’t A Get Rich Quick Solution

“Net metering” between the solar home and the power grid/utility company is the current economic model. When the sun is up, and you are making more energy than you need, your utility company gives you credits at the retail rate for the energy that is flowing back into their system. When the sun goes down (or it’s cloudy or there’s snow on your panels), you buy power from the grid, and pay with those credits.
New York State utilities want you to net out at zero on your yearly solar anniversary. Any outstanding net metering credits are then put against your bill at the wholesale rate, and you start another year of net zero power production and consumption.
If you have dreams of getting rich off your roof or backyard, forget about it. Installers are going to give you a net-zero system, and won’t build a mega-solar power plant on your village colonial roof, no matter how hard you beg. 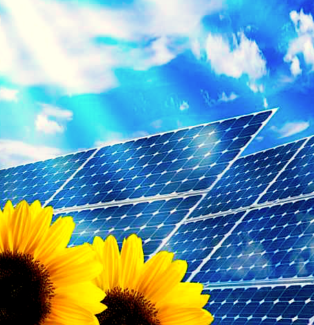 In addition to community education events, Solarize matches local “solar ambassadors” with curious consumers for real-life answers. Maybe it’s not all a rose-strewn path to energy independence, and your solarized neighbor — without a sales quota to meet — is likely to be straight with you.
Because of a friend’s bad experience, Nyack resident Susan Graham had the jitters about solar. But, while at the Grace Church outreach, she signed up for an evaluation of her barn roof, which was originally constructed with solar in mind. “I want to do solar because it’s better for the planet, but the fact that these contractors are totally vetted, and the program stands behind them, is what made me feel right about signing up for an assessment today,” she said.
On a par with the trust issue is, for most people, the expense. John Wackman, Solarize program manager, states that it will almost certainly never be cheaper to go solar than through this program, with a 10% group discount offered by the installers, federal and state tax credits, and NYSERDA’s “affordable solar” incentive of 40 cents per installed watt. Double that for those who meet some moderate income requirements.
Wackman described a real-life small solar installation, valued at about $11,000, reduced to about $6,000 by the combination of Solarize and other savings. Homeowners typically recoup the investment, and move to virtually free electric, in 7 – 9 years, according to Wackman. “If you’re going to buy a system and take out a loan to pay for it,” he says, “your monthly loan payment is guaranteed to be less than what you are now paying the electric utility.” He added that some solar customers are attracted by the potential increase in property value (which, under current state rules, won’t affect your taxes).
Pre-solar energy savings can also effectively lower the cost of a system. Apex Solar Power’s Rand Manasse is now working with at least one local prospect to reduce electricity use to a bare minimum before they throw the solar switch. “It’s always cheaper to save electricity, than to pay for solar to offset it,” says Manasse.

In part two of this series tomorrow, we’ll talk to solar dissenters, learn where those panels come from and hear from some locals who have turned their eyes skyward to keep their electric bill in check. If you are interested in learning more about Solarize Nyack and Solarize Hudson Valley, there’s a free workshop hosted by Orangetown Supervisor Andy Stewart and Solarize Nyack explaining benefits and how the NYS Solarize Hudson Valley group-discounting program works on Wed May 4th at 7p in Orangetown Town Hall,  26 W Orangeburg Rd, Orangeburg