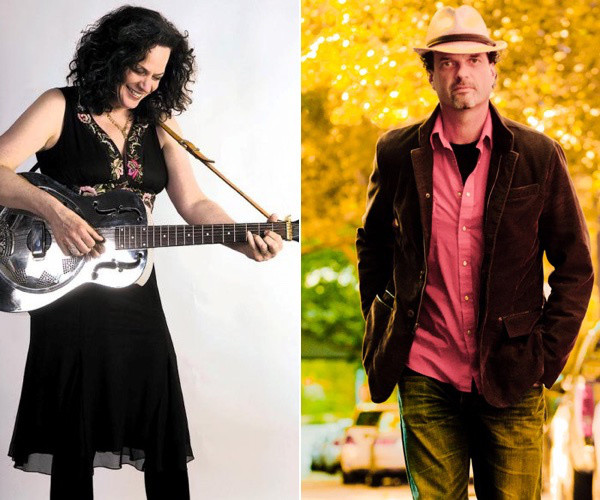 by Steven P. Marsh
Caroline Doctorow considers herself a classic folksinger.
Jamie Block is a product of the Anti-folk revolution.
You might not think they’d have a lot in common. Block is a gentleman farmer of a singer-songwriter, performing and recording when he has time, and at his own pace; Doctorow is a steady producer who seems to be on “perma-tour,” as Block calls it. Block is a financial adviser by day; Doctorow learned of how to command a room armed with an acoustic guitar from Joan Baez (Baez was an early inspiration; her father, the late novelist E.L. Doctorow, edited the singer’s autobiography “Daybreak”).  But these two artists manage to walk their separate paths without losing sight of each other. Wondering how? Check them out in a rare Rockland County concert appearance at Sparkill’s Union Arts Center on Saturday, March 19.
As surprising as it might seem, it’s a natural pairing — they’ve been friends and mutual admirers for a quarter century.
Jamie Block: We met on Long Island [where Block grew up; he now lives in Haverstraw, New York], when my mother died and we had a benefit to support the Joan T. Block Memorial Fund. I was 21 and still in college, but Caroline was there and pushed me onstage with my guitar. That must have been in 1990 or ’91.
Caroline Doctorow: One of the annoying things about Jamie [she chuckles], was that he always had that ‘it’ factor. He has a blistering talent that [has] always shone through.
JB: It was a mutual admiration society from the get-go. It’s very rare that you meet somebody who’s such a great songwriter and also a fan of the music… Caroline even covered one of the songs I wrote. That was incredibly flattering, to have her use “Better Than That” on one of her albums…
CD: Actually I covered two songs. [“Independence Day” is the other song she covered, on her 1996 album Passing Through Tulsa.] I guess I really am a fan… The difference between us is that Jamie is the anti-folk artist, while I am more traditional. Jamie is a little more Dylanesque…
JB: And a little more Husker Dü. [Block found his musical center while attending the University of North Carolina in Chapel Hill and heard the father of the anti-folk movement, Roger Manning, on the campus radio station, WXYC-FM.] The biggest anti-folk artist is Woody Guthrie, and Caroline knows a ton more about him that I do.

CD: Another difference between us is that he has had some amazing highs and lows in his career. I haven’t had that. I’ve just tried to climb the ladder incrementally. Hopefully I’m sort of the tortoise.
JB: To use a financial industry term [Block is a financial adviser by day], Caroline has a less volatile trajectory.
CD: I emulated those singers, who were of the traditional folk era [performing songs handed down rather than writing their own material].
While each artist will do a separate set Saturday, they promise to do at least one or two numbers together — probably Bob Dylan tunes, although Block planned to put off deciding until the last minute to avoid being “over-rehearsed.” If you go, you may witness a bit of friendly competition — a folk vs. anti-folk battle of sorts. “We’re not going to have a crowd-o-meter onstage to see whether anti-folk or folk wins,” Block says, “but we could… We’re celebrating a great friendship that has lasted many decades through a lot of things.”
The show will take place Saturday, March 19, at 8:00 p.m. at Union Arts Center, 2 Union Ave., Sparkill, New York. Tickets: $20 in advance, $25 at the door. GO HERE TO BUY ONLINE. More info at info@unionartscenter.com or 845-359-0258

Steven P. Marsh is a longtime professional journalist based in Rockland County. This article was originally published on his blog, Will You Miss Me When I’m Gone?.