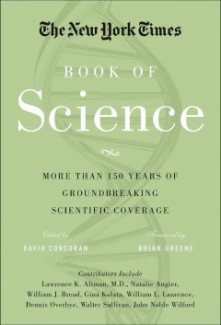 by LeeAnn Mailly
In 150 years, a lot happens in science. Discoveries reveal new insights that change how we understand our world and how we live. The New York Times has been there to inform readers about scientific advances – and setbacks – throughout it all.
Nyack resident David Corcoran, former editor of the New York Times science section, has curated a collection of 125 articles that represent the best of science journalism in “The New York Times Book of Science: More Than 150 Years of Groundbreaking Scientific Coverage.” Corcoran will be at the Nyack Library on Wed March 23 to share some excerpts from the book and delve into its coverage of scientific breakthroughs, setbacks, and mysteries. He will share the story behind the story, revealing how science journalism has changed over time and how the NYT continues to stand out in the age of the internet.
The sprawling book guides readers through exciting discoveries in fields that range from chemistry to the cosmos, biology to ecology, genetics to artificial intelligence. Some stories recount well-known achievements – “Men Walk on the Moon” – but the skillful writing provides a fresh, awe-inspiring reading experience.

Have you ever wondered what it would be like to be the first person inside King Tut’s tomb after 3,400 years of solitude? It’s one of the many fascinating stories in the New York Times Book of Science.
The Food for Thought Lecture Series invites you to take a journey through the best scientific stories of our time with former NYT Science News editor David Corcoran on Wed March 23 at 7p in the Community Meeting Room of the Nyack Library. Please register online or by calling (845) 358-3370 x235.

Other articles offer the reader a glimpse into lesser known subjects like archaeology in “Bones Under Parking Lot Belonged to Richard III.” Still others pose important ethical questions concerning fertility treatments, genetic engineering and technological autonomy. This dense and informative collection of articles is a must-read for anyone who is fascinated by science and appreciates scientific information presented through accessible and exciting narratives.
After reading this compilation of articles, you realize the important role journalists play in the world of science. Complex scientific achievements are often illuminated by writers who skillfully dissect these subjects while making them palatable to any casual reader. Corcoran’s book illustrates the contributions of the NYT science section over its 164-year history, from the era of handset type through the digital age.
Here’s a Q & A giving you a peek at some of the topics Corcoran will cover on Wednesday at 7p. 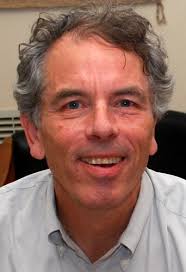 Q: In this collection, is there a particular article (s) that stands out to you personally?
A: Like choosing among my children! But if I had to pick one, it would be John Noble Wilford’s “Men Walk on Moon” (July 21, 1969), still heart-stoppingly suspenseful after all these years. (The story also has a great back story, which I’ll tell when I speak at the library.)
It is interesting to see the style of journalism shift over the years during the course of the book. As the former editor, can you comment on this change in style?
The book chronicles great changes in journalism and science. In the mid-1800s, when The Times was founded, New York had more than a dozen daily newspapers; news arrived by mail, telegraph or word of mouth; interviews could be conducted only in person; type was set by hand. The language was opinionated (even though there were no bylines) and, by our standards, quite flowery. The coverage of science in those days was quite scattered: for example, The Times published a remarkably sophisticated analysis of Darwin’s Origin of Species in 1860, the year after it was published in Britain; then, 11 years later, a very un-sophisticated and backward dismissal of Darwin’s study of human evolution. (Both are reprinted in the book.) In general, as science has grown ever more robust and trustworthy, so has journalism. And that’s no surprise, because the scientific method and the journalistic method are essentially the same: Find things out, make your findings public so they can be scrutinized by others, and always report only what you know to be true.
How can the NYT continue to cover science in a way that stands out from the glut of information that is available on the internet?
Since the early 1900s, The Times has stood out by being the country’s most reliable and authoritative source of news. That’s its trademark and its reason for being.  In the digital age, people depend more than ever on news outlets they can trust to know what’s important and to get it right. In other words, The New York Times stands out by being The New York Times. But producing great journalism is expensive – think of all the reporters, foreign correspondents, editors, photographers, web producers, video journalists, on and on – and the challenge is to find ways to sustain it in an age when everyone expects to get everything online for free.

“The New York Times Book of Science: More Than 150 Years of Groundbreaking Scientific Coverage” is available at Nyack’s Pickwick Books and on Amazon.com.