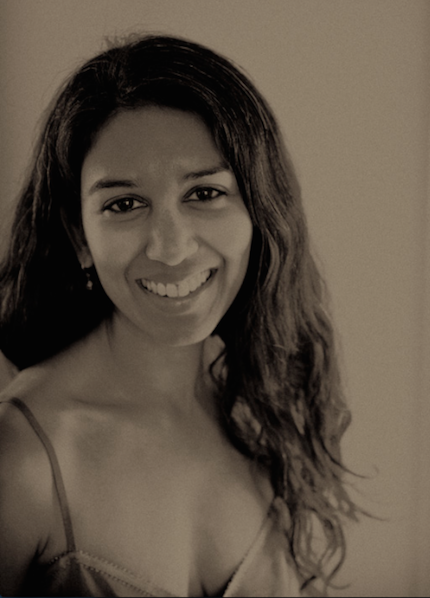 In Kali Sutra Poems, local author, A. Anupama carries us into a sensual world that alternates between translations of ancient Indian texts, lush landscapes, and the stark reality of the choices women make in their lives. The beauty of bodies intertwining and the glimpses of colorful flora and fauna lull the reader deeper into these pages, only to invite Kali, the Hindu goddess who destroys and empowers, a moment later. Within these poems, a narrative emerges of a woman’s journey through love, loss, and motherhood. At times the emotions are understated and at times startling, leaving us in the end feeling that we don’t quite know what happened to us, but we want to enter Anupama’s world of jasmine, curry, loneliness, and lust once again.
Anupama begins her book powerfully; her first poem describes the speaker’s feelings of being dominated and controlled by a male God. As we read, we aren’t sure whose advances the speaker is alternately seeking and then spurning: God’s or her lover’s. The subject matter may be surprising, or even shocking, but the point is made: if we are going to assign the male gender to God, we should be prepared for Him to act like a man.

I sit like this so often, head resting on knees.
God finds me in this pose, and leaves me to sulk.
I suppose then I get angry and chase Him down,
and he can’t be found anywhere.
He knows he is torturing me, and he laughs.

Chasing doesn’t work, so I stand here, being a woman,
and I am lucky that way. Do men wish
they’d invented a goddess? Instead of the guy in robes?
Maybe. I don’t know.
Does God like it that He’s a guy?

In classical Indian literature, the male god is often approached and reproached as a lover. But in this poem, the masculine god is a “guy,” not a noble and beautiful man. This distinction in language highlights the speaker’s frustration at the societal imbalance between men and women. There are instances when this frustration flares into thoughts of violence such as, “I am hoping that I will not lose all of me/ or stab anything that shouldn’t be stabbed/ with a kitchen knife.” This poem cleverly illuminates the hypocrisy of patriarchal religion in which god has been created to imitate and empower the dominant gender.
With her next poem, “Kali at the Jersey shore,” Anupama reminds us of all the power of the goddess.  Kali struts onto the page wearing “narrow heels, / a string of mauve and bronze beads” and the goddess leads the way “slaying … sensibility.” In the pages that follow, the poet speaks yet again through a Hindu goddess. In “Durga talks to her,” the powerful goddess Durga speaks to and consoles a rape victim by promising to restore her honor. Tightly controlled emotion thrums in the lines of this poem. The poet seems to have chosen Durga as her mouthpiece to transform her own anger into strength for the victim, and also, herself.
The allusion to Hindu deities isn’t the only aspect of the author’s culture to be found in Kali Sutra. The second section introduces translations of the Kama Sutra, the ancient guide to the art of making love, as epigraphs, and the latter sections include the author’s own translations from Kuruntokai, an anthology of classical Indian love poetry. The sensual language of these translations along with images of “jasmine flowers, tied gently” or the way “orange-yellow spills from the edge of the sailboat’s prow / into a thirsty sky,” create a lyrical landscape simultaneously peaceful and passionate.
Although the reader will be pleasurably swept along by the rich imagery, the most powerful element is the poet’s ability to represent vulnerability. The reader glimpses the emotional life of the speaker, allowing us to read her thoughts and feel her experiences. She speaks to us, at times, in a quiet pain and, at others, in a storm of anger. This can be seen in the poem “Sutra,” which in understated descriptions, speaks of a love affair and the conception of a child. The tone is one of loneliness as we read about a woman sitting in her car staring at a lake as she thinks about “the hook / in [her] watery place, the new-conceived baby, / the ill-conceived affair,” and now she is “caught where the darkness pressed close.”
These raw emotions come to the surface again in the poem “Milk.” In it, the poet juxtaposes the image of tourists admiring the speaker’s new baby with her thoughts of wanting to walk in front of a speeding bus. The effect is powerful and startling. Much like in “Sutra,” the speaker seems to be caught in her life and yet unable to change the outcome. This emotion is particularly visceral in the following section:

What I knew and did were rote,
The childhood admonitions—don’t spill your milk,
don’t run into the street—I had learned these things by rote.
And that logic made a shell that seemed like a heart,
looked like a heart, around that crazy bloody thing,
stubborn in its beating.

Again, the theme of loneliness, or at least aloneness in her experience, stands out. The poem, instead of being overcome with a melancholic feel, teems with vibrancy with the lines “that crazy bloody thing, /stubborn in its beating.”
Anupama’s Kali Sutra is a book that calls for us to linger in its pages. That would be the only way to truly savor all that the author intended for us to experience: the colorful images, the emotional terrain, and the sensual language of the Kama Sutra and ancient poetry. But there is learning to be had here: we can be quiet in our suffering or, when the anger is so deep it might burn through our own throats, we can speak through the mouths of goddesses and gods. With this collection, the poet calls for us to have a greater awareness of our own inner landscapes and how they translate into the choices we make and the lives we lead. Don’t let the gorgeousness of Anupama’s language fool you, these poems will hit you with beautiful rage.
A. Anupama is a founding editor and organizer of the new, local literary journal River River (RiverRiver.org). An Indian-American poet and a graduate of the MFA in Writing program at Vermont College of Fine Arts, her poetry has appeared in Fourteen Hills, Monkeybicycle, The Bitter Oleander, decomP magazinE, Bayou Magazine, ellipsis, CutBank, The Tulane Review, The Alembic, Numéro Cinq Magazine, Permafrost Magazine and other publications. Honors include a fellowship at the Center for Book Arts in NYC and a Pushcart Prize nomination in 2015. She teaches creative writing for kids and teens at Writopia Lab. You can also find her on Facebook, Instagram, Twitter and her blog, Seranam.com.
Rebecca Watkins received an MFA in Poetry from the City College of New York and has taught poetry, writing and English as a Second Language at the college level for eight years in the greater New York area. She was awarded a poetry residency in Honduras for the month of January 2015. Her poetry has been published in The Promethean, The Red Mesa Review, Poetry and Performance, Anderbo and the SNReview, among other literary journals. Rebecca is a certified Hatha Yoga instructor, has lived and volunteered on the Navajo Reservation in New Mexico, and has worked on two organic farms.