by Susan Hellauer
Nyack, Jan 27 — The often-heated give and take between Nyack’s Village Board and its residents took on an unexpected shape Tuesday night at a public workshop to discuss potential changes to the village’s WaterFront (WF) Zoning District. New arrivals, of the 70-odd participants, eyed the main board room of Village Hall, and the six large round tables, with amusement, doubt or suspicion. Most opted, cautiously, for one of the seats against the walls, or milled about in the entryway.
The mayor and trustees wanted to give Nyack residents an opportunity to hear the village’s ideas about the proposed zoning text revisions, and wanted their input as well. And this time, the public would not be lining up to to air their personal views one by one, but working together in circles, studying table-sized aerial maps, and — led by architects and designers — discussing, deciding and reporting. 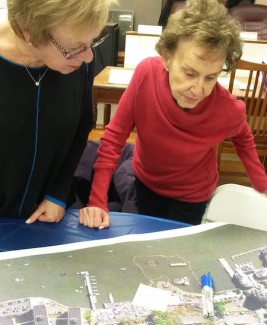 Mayor Jen Laird White opened the meeting with a review of the TZ Vista development project thus far. She noted that the developer has been “quite willing to hear the community, and wants this to be a process that the community likes.” Mayor White said that she, herself, had “spent the better part of a decade” trying to get the Gedney site donated for use as public space. But the effort was overruled by the costs of maintaining a second waterfront park.
Village Planner Bob Galvin summarized the work of the Planning Board, who created the new proposed amendment in response to community concerns with the rejected six story text amendment proposed by TZ Vista last fall. Galvin introduced Frank Fish, of BFJ Planning, who are consulting with the village on the design elements in the new Comprehensive Plan and the proposed text amendment. Fish reviewed the major changes in the text amendment, and asked participants to look at the plans and react. “We’re trying to incentivize the developer to get much more open space on the water than is currently required. That’s the balance that we’re trying to achieve. Have we gotten this right, or not? That’s what we’re trying to find out at these tables,” Fish said.
The highlights of the proposed new text amendment include a maximum height of 35 feet — or, by special permit 52 feet (five stories) as long as special as several special conditions are met. For each five-percent reduction of maximum width, the maximum height can be increased by five feet. 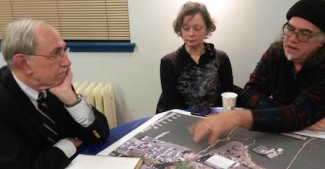 The village is proposing a reduction in the maximum FAR to 1.5 (Planners call the relationship between livable floor space and the total development footprint the “FAR,” or the Floor Area Ratio), which is lower than the 1.75 that TZ Vista had initially proposed. The text amendment also calls for an easily accessible public waterfront park, wide “view corridors” at cross streets, setbacks for taller buildings, underground parking and retail/restaurant space.
By ones and twos, participants began drifting to tables during consultant-designer Eric Fang’s slideshow on the history of Nyack’s waterfront, the Gedney Street site and the public amenities in the proposed amendment.
Before beginning the round-table breakout sessions, a brief Q&A made it clear that some residents have the same concerns with the new amendment as with the original TZ Vista proposal — about height and view corridors, about environmental impacts, noise, traffic congestion, and, eventually, a skyline of tall, blocky buildings descending between Gedney and the river, jumping back up to five stories at the TZ Vista site. High Avenue resident Laura Pakaln mentioned environmental concerns, including “the noise of landscapers, and all their equipment, who will be working on this huge development.”
Participants were then asked to choose a discussion at each table about Main Street, Gedney Street, the waterfront, or the “free-form” discussion to work with neighbors and a BFJ designer to pinpoint concerns and make suggestions. The results of these conversations were to be shared with the Village Planning Board when considering the revised text amendment.
At the “Main Street” table, Carmen Rosenthal and Adele Garber gazed down with obvious concern at the satellite view of their home in the Clermont. “We live in Nyack and we love it, and just hope that this process respects the rights of Clermont residents” in changes to the foot of Main. She admitted that “we do need retail businesses brought down here.” At other tables, residents worked on “wish lists” — not only of amenities like public riverfront access and restaurants but of details, like Nyack Boat Club street parking, signage, sculpture, lighting, tour boats, kayaks, canoes and water taxis . . . right up to the overarching project design.
The meeting wrapped up with each round table’s report. A low profile development, wide view corridors and easy public access to a well-maintained riverfront walk were on everyone’s list, but an ambitious proposal presented by Planning Board member Alan Englander called for riverfront festivals and a deep water pier for off-hour tour boats. There was a universal wish for a foot-of-Main Street that rolls invitingly down to the river, where walkers are drawn in, and not, as now, blocked out by the Clermont, or confused and repelled by its parking lot.
The Nyack Planning Board and its consultants got the input they asked for, but did this creative exercise in village democracy change minds? Barbara Cohig, whose home is around the corner from the proposed development, said that members of her “free-form” table felt that five story buildings would be too tall for the surrounding neighborhood, and, from at least one contributor, that Nyack should still try to obtain the land for “cultural or natural usage,” an option that elected officials have ruled out as being well beyond what the village’s tax base can support. “What we have there now is openness,” referring to the undeveloped former Superfund site on Gedney Street. “We don’t even have public access, but the openness is such a special thing. Putting up these five story buildings would destroy a positive that we have in openness, and get us only 30 feet in return, which is not that much.”
Mayor White was pleased with the collegial exchange of ideas. “It was a great meeting. We want this to be an open process. Let’s get some park land and public access out of all this for our residents.”
See also: