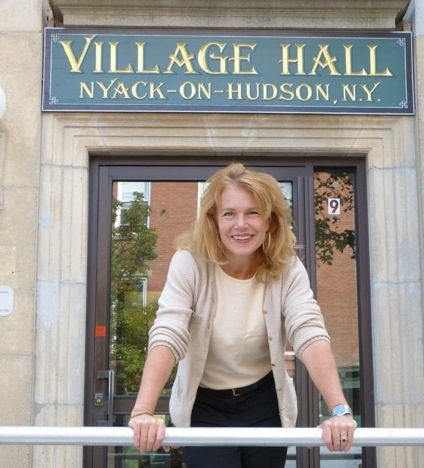 by Jen Laird White, Mayor of Nyack
I want to start my note to all of you by announcing the appointment of a new Treasurer, John Pintos, a wonderful addition to Village Hall who began work in December. John has deep experience in the financial realm and also lots of knowledge about the computer financial operating systems that the village has owned for some time but has never fully understood. He is committed to modernizing the way we do business and we welcome him and his depth of knowledge.
It has been a busy few months for the village. Congratulations to Doug Foster and Marie Lorenzini on their re-election as Trustees of the village. I am delighted to have also won re-election to my final term as Nyack’s Mayor, not entirely surprising since, for the first time since running for mayor, I had no challenger, but joyous, nonetheless. Thank you, so much, for the honor and the privilege.

The village was delighted to parent a wonderful creative project called the Nyack Window Project, which transformed empty storefronts into well-known artists visions of holiday windows. The projects were fantastic, interesting and thought provoking and we thank all of the artists (Joanne Howard, Tony Oursler, Kristina Burns, Michael Zansky, Susanna Frosch, Rodger Stevens, Johanna Goodman, Joanne Howard and Bill Batson and the Nyack Center Kids), the sponsors, Weld Realty, Nancy Blaker Weber, DCAK Architects, TIME Hotels, Alianza Furniture, Christopher Street Financial and all the landlords who were amazingly willing to participate, helped us iron out the bugs and threw caution to the wind for something new and interesting. We received a lot of great press about the project and store owners reported folks coming to the village just to see the windows.

We have quietly rolled out a few new parking initiatives in the last few weeks in our constant quest to make parking easier, more friendly and clearer. The most exciting is called the Free Fifteen, a computer upgrade to our muni-meters that allows those parking in the village to simply press the green button on the meter without putting any money in and receive a ticket that allows for fifteen minutes to run simple errands (one of the biggest complaints we get in the parking office is from those who receive a ticket while running into Koblins or the pizza places for a quick errand and DO NOT put money in the meter…they often say “But I just ran in for fifteen minutes”…this is our solution…FREE FIFTEEN)
If, however, you plan to stay longer, you MUST put money in the meter. In addition to the Free 15, we have increased the length of stay in the lots from four hours to seven hours and we have increased the cost for prime parking, on the streets, by twenty five cents. We are also about to purchase new signage for the village lots and update the signage on all muni-meters.
In this years budget, we plan to reduce our parking revenue numbers by an additional $100,000. bringing our total parking revenue reduction to $300,000 in three years. By changing some of the policies we will be lowering our dependence on parking revenue while still maintaining the key elements of the parking study that encourages short term parking in our business district to help our local merchants.

Now that we know how to make this work, next year, it will be even better!

Three large projects for planning Nyack’s future are underway. They’re all very exciting, and I urge you to get involved. First, Plan Nyack: A Blueprint for the Future is the update to our Comprehensive Master Plan under a $206,000 grant from the NY State Energy Research and Development Authority (NYSERDA). It will update our existing Master Plan with a particular focus on sustainability and the potential impacts of climate change. We have an excellent existing master plan but it was written in 2002, updated and ratified in 2006, and is due for an update. Creating the plan is a community process that involves gathering input through workshops and a survey that will be conducted this winter, looking at the existing plan and updating each chapter in regards to things like transit, downtown, development and the waterfront. Community members come together to discuss what they would like to see in Nyack, what might be possible and to learn from each other and the project consultants. The draft plan is available for review throughout the process, an open hearing will be held in spring and the plan will be finalized late this year. See the schedule for these public meetings on the village website.
The second project is a 1.48 million dollar TAP grant (Transportation Alternatives) that will design and implement changes on Broadway, Cedar Hill and parts of Franklin geared toward creating walk-ability, bike-ability and a consistent feel throughout the village. Public meetings are also an important component of the TAP grant process and your attendance is not just welcomed but really important!
And last, Nyack received a $75,000 grant last month for an update of the LWRP or the Local Waterfront Revitalization Plan, from the Governors CFA Program that will allow the village to look at its waterfront planning and, again, its future with a goal toward making the waterfront resilient but also vibrant and active. That process is in the planning stage but we will let you know as soon as public meetings are scheduled.
Once all of these grant funded projects are completed and Nyack has a clear blueprint for where we want to be in decades to come, the planning and implementation and the seeking of funds for all of these dreams can start to become a reality.

We have put out a search for a new head of DPW but, thus far, our search has not yielded an appropriate candidate. Village Administrator Jim Politi and DPW Administrative Clerk will continue to run the day to day operations of Public Works and any queries or concerns related to the village should be directed to them. We are hard at work on an extensive spring paving schedule and many of the neighborhoods that we could not afford to pave this fall will be completed in the spring.

Jen Laird White is the Mayor of Nyack, NY