The original headline on this October 15, 2010 story was “TZB: Funding Still In Flux,”  Although the replacement Tappan Zee Bridge has been funded, it’s still not quite clear how much the new tolls will be. We will probably finish 2015 with the same message we heard in 2012, 2013 and 2014: stay tuned.

In a tribute to the 60th anniversary of this vital artery across the Hudson, Nyack News And Views is republishing stories from milestone moments in the life of the Tappan Zee Bridge. 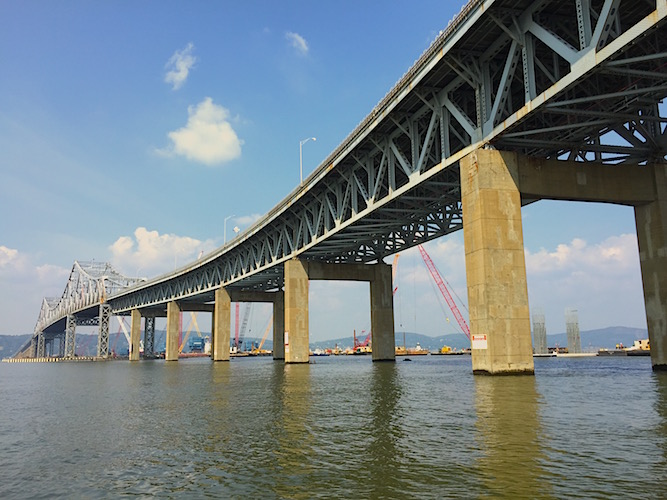 A lot has changed since 2010. What was once planned to be a regional  “corridor” project designed to improve mass transit and vehicle traffic between Suffern and Port Chester costing more than $16 billion, is now a more “modest” crossing project, focused on the bridge itself, which will run about $4 billion and change. This 201o story about the corridor project is worth a read regarding some of the bold and prescient things bridge planners said then which have come true — or will come true in the years to come.

New City, October 15, 2010 — Project Director Michael Anderson says that when the ribbon is cut for a new Tappan Zee Bridge sometime in the next ten years, the eight planned lanes won’t have enough capacity to support all of the cars, trucks and buses that want to cross the Hudson. But even if more lanes are added traffic would  still be constrained by the roadways that feed the bridge. That’s why about half of the $16 billion planners are asking for the Tappan Zee Bridge/I-287 Corridor Project will be used to expand intra-county, inter-county and NYC-bound transit options. “We can’t build our way out of congestion,” he says.

Anderson presented the two bridge design finalists during a status report to the Rockland County Legislature. A single level design where commuter rail trains (CRT) run in the middle and a dual level design where trains travel below have been chosen. A new CRT (commuter rail transit) line will take commuters from Suffern to Grand Central. A Bus Rapid Transit (BRT) will run along the 287 corridor between Suffern and Port Chester.

If funding is secured, bridge construction will begin in 2015.

NYDOT’s Phil Ferguson told the legislators he’s sticking with the project’s original $16 billion estimate — for now. But he cautions that the longer it takes to start the project the more it will cost. Ferguson says it’s important to position the project for future federal dollars like the proposed National Infrastructure Bank and look at value engineering to try to reduce costs.

“This is an extraordinary challenge which needs extraordinary solutions,” Ferguson says. “It is unrealistic to think we can get 100 percent federal funding for this project.” To demonstrate the challenges of funding, TZB project officials projected trying to bond the project using the unrealistic prospect of $15 bridge tolls. “We would have only been able to bond $2 billion — far less than than the $8.3 billion needed to just build the bridge,” he says.

Anderson briefed the legislature and local and regional officials on several project decisions:

See also (from five years ago):