Nyack, Dec 13  — It may be 60 degrees outside, but this evening will begin to feel a bit like Christmas…Chanukah, Kwanza and Festivus. The annual Nyack Center Holiday Readings will be held tonight, featuring local artists, musicians and actors including Steven Bernstein, Dennis Boutsikaris, Sean Fleming, Sakina Jaffrey and Darrell Larson. The evening is 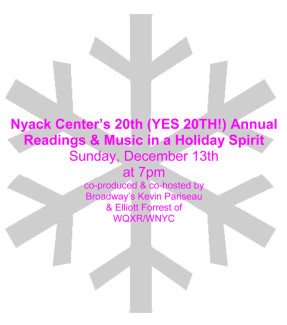 co-produced and hosted by Kevin Pariseau and Elliott Forrest.

There’s a lot to love about the readings – they’re communal, inclusive and uplifting, embracing holiday spirit whilst largely avoiding outward religiosity or Christmas commercialism. But as a show, the Readings’ greatest strength is the way they complement tradition with the new. The show is anchored each year by some of the same high notes – Sean Fleming’s Irish-electric take on “Santa Claus is coming to Town”; Host Elliott Forrest’s droll stories about growing up Jewish in Texas – but the ultimate caliber of the show is determined by the newcomers to the Nyack Center Stage. In year’s past, local talent of the likes of actor Bill Irwin, author David Means, and actress Debra Winger have been featured. This year, some of the best performers of years past, such as Bernstein and Jaffrey, will return.

And the latest addition to the lineup is *drumroll*… Hal Linden.

Admittedly, prior to hearing that Linden was a late addition – he’ll play clarinet alongside Steve Bernstein – I was unaware of him. I’m 23. But for someone a generation or two older than me, Linden’s kind of a big deal. Why, you ask, fellow youngins?  Here’s what you need to know: