A year and a half after the tragic car crash that left Tracy Morgan in a two week-long coma, he’s back on stage. Friday Night’s crowd at Levity Live in the Palisades Center, welcomed him with a standing ovation. “I’m up here,” he said, followed by a drawn out “shit” and a disbelieving laugh. He was quick to put things in perspective. “It could’ve been worse,” he said. “I could’ve been hit by a dirty furniture truck, some guy named Rico driving it, he ain’t got no insurance, no registration, no license. But I’m here, it was Wal-Mart.”

Morgan received a $90 million settlement from the crash. So his 2016 “Picking up the Pieces” tour that this show, the second of three nights and five sold-out shows at Levity Live, was preparation for, is not necessary for Morgan to make a living. Performing may be as necessary as speaking and walking for Morgan to continue to live.

His set oscillated between vulnerability and 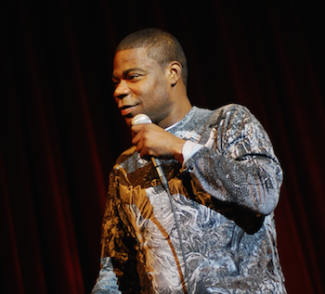 vulgarity. “I gotta pace myself up here,” he said midway through his set, adding, “I don’t want one of these screws in my leg to come loose so I accidentally fall and grab your lady’s titties.”

Nearly every bit, whether about Paula Deen or President Obama, came back to the crash. It was there in his material as much as it was in the way he delivered the material – limping around the stage, and occasionally needing to sit down. Some of his loudest ovation came when he first sat, after he remarked that, “I never had to do this shit before the injury.”

It felt like rare, unexplored territory for a comedian. Many comedians have died young or weathered tragedy, but few if any have performed after coming so close to death. Morgan wove in the same emotionality that he’s displayed in his post-crash public appearances, whether with Matt Lauer or at the Emmys, but onstage he used these moments to punctuate a punchline: After the crowd awed when he said “I learned to walk in the same week as my baby daughter,” he quickly called them out, “Oh, you’ll believe anything. I’m just saying that to get pussy.”

Morgan’s set is a new experience for audiences too. Levity’s general manager, Melanie Perri was with the club in 2012 and 2013 when Morgan performed pre-crash. She remarked that Morgan is professional as he ever was and is getting the same laughs, but that the audience has a new appreciation for him. “They’re completely captivated for a different reason. Now, it’s just they can’t believe they’re seeing someone that they might not have been able to see again. We could’ve lost him, and it was very close. So people are in awe of seeing him, and so thankful to be able to see him again.”

Morgan was at times taken aback by the reverential reception. “There’s so much good will for me out here. How do you reciprocate that?” he asked rhetorically towards the end of the show. In a moment of heartfelt, unbridled sincerity, he explained, “I do this ‘cause I love y’all. And I missed you.”

While Morgan wasn’t perfect by any means – this was a warm-up, in which he made no bones about frequently checking in with a sheet that outlined his set – he hit all the right notes.  And while laughing was the best medicine for dealing with his own tragedy, for the tragedy in Paris, which had occurred just hours before he went onstage, he appropriately ended the show with a moment of silence.