There are many things  on Thanksgiving Day for which we are grateful. Some of us are grateful for things that most of us take for granted.

One night in January 2011, I woke up in the middle of the night with intense abdominal discomfort that increased as the night went on. A trip to the ER at Nyack Hospital led to various tests and scans, and the diagnosis was a fairly severe case of pancreatitis. I spent a couple of days as an inpatient for observation and further tests. The initial thought was that it was a gall bladder problem, so a few weeks later I had surgery to remove it. However, my health rapidly declined. I saw my Primary Care Physician again at the beginning of April. He ordered bloodwork which led to five days as an inpatient at Nyack Hospital because the results were so abnormal – CTs, MRIs, an inconclusive endoscopy, and finally advice from Dr Eriksen that “We need to get you to Presbyterian.” The next few weeks are a blur. After another endoscopy and a stent to re-open my bile duct that was closing due to a growth around it, I met with Dr John Allendorf and on May 20, 2011 he did an almost 6 hour Whipple procedure – I spent 36 hours in the ICU and went home after only seven days. 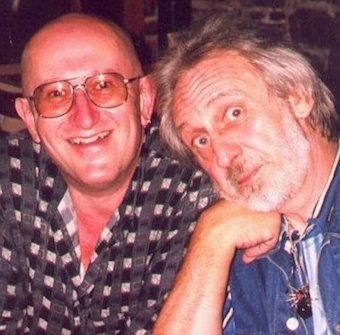 John Whitley (left) with The Who’s John Entwistle. Whitley worked as the “door dude” at The Turning Point in Piermont from 1993-2001.

Two weeks after surgery I was introduced to my oncologist, Dr Wasif Saif. It was only at this point that I realized that the tumor had actually been on the head of my pancreas, not just the bile duct. The surgery had been 100% successful in removing the tumor, but as a stage 2 patient, he told me that after another month I would have scans again and we would start a course of preventative chemotherapy. He explained that as a patient, I was “his buddy” and ended our first meeting as he did all future meetings – with a hug and the words “Until next time.”

At the end of June I had a CT, MRI and PET scan and I returned to meet with Dr Saif. As gently as he could, he explained that although the surgery had been successful, the scans showed that the cancer had metastasized to my liver where I had a 1.8 centimeter tumor. I was Stage 4. He said “My buddy, we will do everything we can, but I am sorry to say that you are probably looking at around 12 months or less.” He went on to explain that the following day I would have an i/v port installed, chemo would start a few days later – gemcitabine combined with (if I was willing to participate), a double-blind clinical trial of a drug called IPI-926. He then said words which I will never forget – “We take my experience as a doctor, all the resources of this hospital, your willingness to fight, and we put ourselves in the hands of God”.

That night I Googled “Stage 4 pancreatic cancer.” Do not, do not ever Google your medical condition. After several hours and numerous websites telling me the same thing ….. “You’re going to die!” I said “No, I am going to fight this with every ounce of strength that I have.” One of my friends later joked that if you search Wikipedia for the words “stubborn bastard,” it takes you to a page where there is a photograph of me.

I started the chemo, and every day I took the six capsules that were part of the clinical trial. Every day I literally told myself that it was a new miracle drug that would cure my cancer.

I grew up on a farm in the Yorkshire Dales in the North of England, went to a very traditional Grammar School, did a B. Sc. Degree in Environmental Sciences at the University of Salford, lived in London for eight years during the height of the crazy, vibrant punk era, and in 1985, achieved my long-time dream of moving across “the pond.” I initially lived in Boston, then in 1988 moved to the Village of Nyack.

Two months of chemo later, following my monthly scans, on September 16 2011 at 10.16am, my phone rang …. it was Dr Saif. He told me that although I was scheduled to meet with him the following Tuesday, he wanted me to have the news that my latest scans showed that the tumor in my liver had disappeared to the point where it could no longer be detected. He said he hesitated to use the term “miracle,” but if there ever was such an occasion, this was it. Surprise, shock, joy – tears? …… You bet.

We continued the gemcitabine for the rest of the year. Around Thanksgiving I noticed that I was having increasing shortness of breath and dizzy spells and frequent inability to breathe. I showed up for my first chemo of December and ended up as an inpatient for 14 days. I knew that I was very sick but didn’t realize just how sick until months later Dr Saif showed me a paper where he described me as “a patient who had developed a rare but near fatal toxicity to gemcitabine” which had turned into a very serious lung infection. The day I was admitted, I was literally within hours of death.

In January 2012 we changed to 5F for four months. I had my last chemo on April 20 and the following day, celebrated my 57th birthday by doing a Purple Stride New York walk in Riverside Park, raising a few dollars short of $2,000 for the Pancreatic Cancer Action Network.

Since then, there have been a few challenges. In August 2012 I had to have surgery to implant an abdominal mesh to repair a huge hernia. In December 2012, a week after the joy of having my i/v port removed, I was rushed to the ER in the middle of the night after having a mini-stroke. In April of 2013, when my weight kept dropping and dropping, I finally reached the point where I had lost 130 pounds compared to what I weighed before all this saga started. Extensive testing at Nyack Hospital then further testing during five days as an inpatient at Presbyterian finally revealed the problem – an extreme case of Celiac Disease. Since going 100% gluten free I have finally reached the point where I really should go on a diet.  The good news though? I have just become something of a phenomenon – a four year survivor of Stage 4 pancreatic cancer – I am still officially “NED” – No Evidence of Disease…… Some of the staff at NYP call me “The Miracle Man.”

By the way, almost a year after my treatment ended, I contacted the Boston offices of the Australian drug company who produced the clinical trial drug IPI-926. They were just as surprised as I was – during the clinical trial, I was actually on the placebo.

Over the past four years, many people have come into my life and have become part of literally saving it. The doctors, surgeons, nurses, technicians at New York Presbyterian Hospital, particularly the staff of The Pancreas Center and the staff of the infusion unit on the 14th floor of the Herbert Irving Pavilion. The hospital’s slogan that is shown on the huge banner that hangs over Fort Washington Ave says,  “Amazing things are happening here.” Yes, they are.

As a single guy living on my own, I could not have done this without the love and support of family, friends, colleagues, and loved ones. So many people.

In November 2013 I was invited to give a speech at the annual Pancreatic Cancer Awareness Conference at New York Presbyterian, and in the Fall of 2015, I was invited by the Pancreatic Cancer Action Network to give a speech at their “Purple Light –a vigil for hope” meeting in Union Square. In the hustle and bustle of a corner of Union Square on a Sunday evening, I spoke to around 250 people. Most were there deliberately, some had just stopped to see what was going on. That’s why that night in Union Square I launched my campaign “Hugs For Hope.” Sometimes something as simple as a hug can “make the day” for a cancer patient, care-giver or health care professional. A few months ago I was honored to be asked by The American Cancer Society to give a speech at an event at Hope Lodge on W 32nd Street.

I am now committed to attending the monthly Pancreatic Cancer Support Group Meetings at New York Presbyterian because apart from the four letter word I uttered when Dr Saif told me I was probably going to die, there is another four letter word that I can actually say today….. HOPE. If you are a current patient, always have hope. When things look bad, always have hope. Hope can help you fight and if you fight, you have a chance.

As long as I am able and as long as I am asked, I will go to meetings and events to speak, to tell my story and possibly give something that is so, so precious ……. HOPE.


November is Pancreatic Cancer Awareness Month and Whitley encourages people to support The Pancreatic Cancer Action Network, a wonderful organization that provides essential support to patients and their care-givers as well as tirelessly lobbying for increased funding for research.