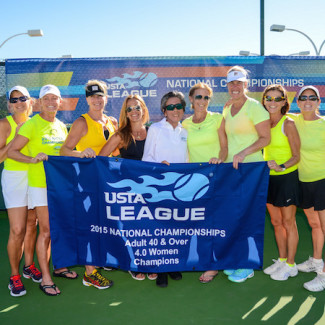 “It was an unbelievable experience for me,” said Goldstein. “It was bittersweet to win, you work so hard to get there and then it is over. Everyone works as a team and it is really a great experience.”

The 17 year resident of Nyack and Piermont is the mother of two high school boys.  Goldstein grew up in the Village of Wesley Hills attended Ramapo High School. This is her second trip to the finals: in 2013, she was part of a New Jersey team league that played for the national championship.

In addition to being a tennis enthusiast, Goldstein owns a fitness apparel company called Pheel.

Although she has been playing tennis for most of her life, Goldstein didn’t at take to the sport at first. It wasn’t until she joined the Ramapo High School tennis team that she started to show some promise, making the all-county team for doubles play. She later played tennis on the college level at the University of Maryland.

After her kids were born, Goldstein returned to the sport and became passionate about the game, which she says is a stress reliever.