The Bronx isn’t just one thing. New York’s northernmost borough, The Bronx was, for parents and grandparents of a certain age, a wonderful place to raise a family before that Son of Satan Robert Moses bisected the borough with the Cross Bronx Expressway, crushing the hopes and dreams of a generation with that sad alternative known as Co-op City. Not that I’m bitter, but the Bronx gets no respect. For people from Westchester, it’s a ghetto, something to be gotten through on the way to Manhattan or points south. For New Jerseyans, it’s the place where the Yankees play and not much else. For Long Islanders (ie Mets fans), it’s the place where the Yankees play– may it rot in hell!!! But the Bronx today is all this and more. Quite a lot more, in fact, and I got an up close and personal look at much of it during the Tour de Bronx, an organized bike event I rode in on the last Sunday of October. 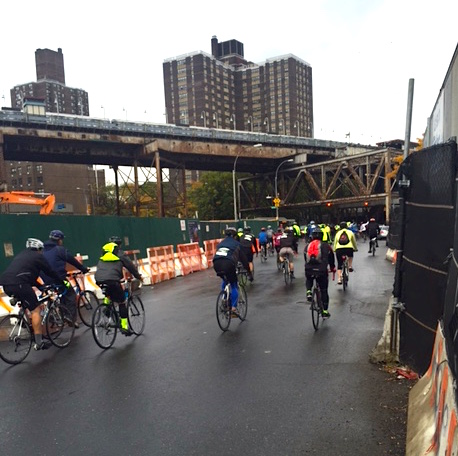 I’m no bike maven, but I do own a working, fairly decent bike, and I ride a bit here and there. I had some trepidation about undertaking a 40-mile ride, but when I reached the start, on the Grand Concourse before the Bronx Supreme Court Building in the shadow of Yankee Stadium, my heart grew light, I was relieved, relaxed, and warmed even though a light rain was falling and we had to wait about 45 minutes for the race to start. But ot was cool because I was surrounded by not just an intimidating coterie of spandexed speedsters with their airy bikes and scary thighs (though there were plenty of those), but by every manner of cyclist and bike. This was a tour for all comers, a small-c catholic tour. There were chunky grandmas riding big, beautiful old style bikes with broad, comfortable, seats and wide handlebars with caps and sparkly tassels fit for royalty. It’s their world, we’re just biking in it. There were intrepid experimentalists astride cutting edge bikes with what appeared to be motorcycle tires, gigantic pneumatic beasts with extra-low ‘granny’ gears and a ride like a 70s Caddy. Then there were local ‘homies’, in cargo shorts and loud oversized tees, riding bikes with banana seats and great chrome handlebars that you leaned over as you climbed but rode in the flats like a Harley, leaning back and letting your hair flap in the breeze. It helps to have flappable hair. Milling around the start, Jamaican patois mixed with high French and low German and lots of Puerto Rican Spanish as the crowd waited for the Tour to begin, but once we hit the road we all melded together. Over hill or down dale, everyone grunts the same.

“Yo Yo Yo, Wassup? Is Bronx in the house? I can’t hear you! Is Bronx IN THA HOUSE!!!” was how the Boro president Ruben Diaz Jr. began his speech to the assembled multitudes. A compact, energetic man with a neat goatee and a booming voice, he seemed like good people. Definitely got the crowd going. Then he blew it by jawing on and on about the civic improvements made during his tenure, though saved himself a bit at the end by describing some of the natural wonders we’d see on the course.

And wonders they were. The rain petered out and we went through overpasses and train trestles that took on a certain derelict iconic beauty against the steely sky. We proceeded past Hunt’s Point and down to the water, where we wound around through gorgeous parkland, the trees in full fiery splendor all along the crenelated coastline. The beautiful path went on for miles, past several picturesque inlets, through charming sleepy streets in Mott Haven and Throg’s Neck and out to the Maritime Academy, which sits at the end of a spit of land accessed by one two-lane road, so as you went out there you kept to your side while all the compadres ahead of you whizzed by on your left. School may not have been open on Saturday but it certainly was in session, and groups of uniformed cadets waved as we rolled by. It was awesome.

From there we made a loop through the lovely though comparatively urban City Island and continued on to Orchard Beach, another undiscovered gem that till now I’d only known as an exit off the Hutchinson Parkway. Turns out it’s a splendid park with a gorgeous, wide beach (closed for the season), and we gathered at a rest station on the boardwalk for water and bananas as we looked out upon the calm noble waters of the Long Island Sound. We had reached the highlight of the ride. It didn’t get any better than this. 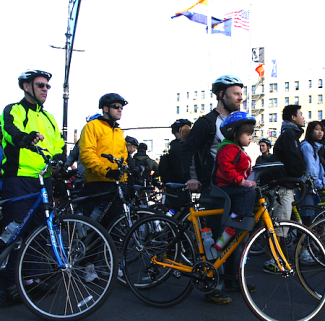 In fact, it got quite a bit worse. Which is to say, we started climbing. Now, the Tour de Bronx is known as a fairly mellow ride, and up till now we’d gone mostly downhill or flat along the glorious Bronx Riviera. But the Bronx ain’t Long Island. Bronx has hills, bro. And the two or three ten mile rides I’d taken in preparation for this Tour—they were important, don’t get me wrong. They served me well through the gentle slopes of Morris Park. Getting a little winded on 222nd Street. And by the time I got to Woodlawn Cemetery, a gorgeous oasis of greenery and fall colors, the final resting place of the great Miles Davis, I was huffing and puffing and my legs felt like jello, like salamis gone bad. I managed to make it up to the crest of Woodlawn without incurring a coronary infarction, and rested there with my friend. Then there was a pleasant downhill, through Van Cortland Park and down the lovely Mosholu Parkway (I love that name). We had our final rest stop in a small bit of park, a leafy redoubt hard by Broadway, under the shadow of the El. Looking across Broadway, past the El, you could make out our final major challenge, the towering bluff on the top of which sat Riverdale. Borough President Diaz was determined to show us all the many rich and varied neighborhoods of his borough. Damn him. That bluff looked like El Capitan in Yosemite from where I stood, an El Capitan with decent pizza and spots for intrepid travelers to get a good haircut or shoeshine. Or a chicken.

I followed behind my companion as we began the assault. About three hundred yards in my legs began to feel worse than jello, worse than bad salami. They seemed to stiffen and harden as if pumped full of Superglue, and were not responding to my brain’s plea for one more revolution, one more, just…one…

Luckily at this moment, something fell out of my pocket and I immediately got off my bike to pick it up, like it was the most vital thing in the world that I retrieve this….chapstick, it turned out. I bent down to pick it up and was not at all sure I’d be able to right myself. Cyclists were passing me on sleek Lightspeeds, Moms on clunky Schwinns, kids in t-shirts with mangy-looking fixed gear bikes (only one gear—imagine!). Do you need help? one asked as he whizzed by. No, no, I’m fine, I wheezed, ass in the air, my head permanently stuck by my knees. Just grabbing my chapstick. Gotta have my chapstick. I’m back on the bike any minute. Any minute.

I finally righted myself and walked gingerly back to the bike. I swung my leg over and started off, fully expecting to feel like I’d felt before. But no. My legs had revived somehow, just a little bit. That tiny reprieve allowed my legs to function well enough so that, in time, in lowest gear, I was able to make it up the long zig-zag route to the top of the bluff and into Riverdale. I felt like I’d conquered Everest, and had the breathing to match. The rest would be a piece of cake, right? Right?

Well, not exactly. There were a few nice downhills, as well as beautiful, little, crooked, all but unpaved lanes that seemed remote as an English village or Vermont hamlet as we wound our way toward the finish. But also a few sneaky uphills, not all that short, on one of which I gave up the ghost, got off my bike and walked to the crest. This is supposed to be anathema to the practiced cyclist, and I suppose it is, but to me it was blessed relief, a way for my body to acknowledge what my head was not ready to admit: That I was tired. That I was about to cramp up, which would have made the rest of the trip a lot more uncomfortable; that the point is not to do it without getting off your bike. The point is to do it. And I did it. And it was good.

My friend was well ahead of me, but when I got to the final resting place, in another lovely park where they were giving out vitamin water and greasy, spongy, tasteless, utterly wretched slices of Domino’s Pizza, which of course I scarfed hungrily down. And then lay on my back beside my friend and watched the clouds roll by. The day had turned beautiful, the rain had stopped hours ago and now the sun peeked through clouds that looked like lambs, like dogs, like trains, and one exactly like the profile of Christopher Plummer. Such are the joys of an arduous bike ride. You notice things. You pay attention. You test your body to limits but not beyond. And it feels so good, so damn good, yes it feels so good when, at last, you stop.

NYC’s Transportation Alternatives runs the Tour de Bronx every October. You must register, but it is free. There are two separate routes of 25 and 40 miles. Volunteers to manage route and attend rest stops are welcome too! Find out more at BikeNYC.org/tourdebronx