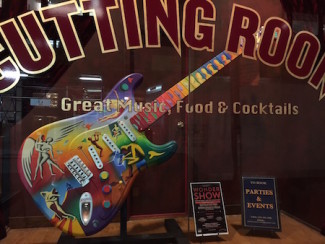 At least, that’s what I’m telling myself when I pull up outside The Cutting Room in New York City to see Glint, a band featuring Nyacker Anders Fleming on drums. They’re opening for Mark Kostabi, a fixture on the East Village art scene in the 80s. I had no idea he was a musician. There’s a Kostabi artwork, a gigantic, colorful guitar, on display in the window as you enter. It’ll be interesting to see what he’s up to.

Glint played an acoustic set, with Anders on guitar. Lead singer Jase Blankfort has an expressive, flexible voice which he uses to great effect on songs that combine the yearning of early Neil Young with the plangent harmonies of Simon and Garfunkel. They have a ways to go before reaching that level, but Fleming’s falsetto was a nice complement to Blankfort’s strong tenor, and, well, I guess I’m just a sucker for harmony. They played a short set, however. But the harmonies were tight, the arrangements sweet, and the songcraft solid, so Glint is a band to keep an eye on.

Mark Kostabi knows a thing or two about publicity, about showmanship, so I was expecting something unexpected. He assembled a crackerjack band featuring Tony Esposito on drums (in true holier-than-thou insider Rock fashion, he pronounces his name not like the old Ranger Phil Esposito, but EsPOsito), but he played the hell out of the drums, especially when he sat in on Glint’s final number.

I’m surprised to report that Kostabi was disappointing. Not that I was expecting pyrotechnic displays of virtuosity, but I wasn’t expecting it to be….boring. Kostabi plays a middling piano, about the level of a decent 6th grader, and writes songs on simple repeated riffs and predictable changes that would be perfect commercial background music for an anti-anxiety drug. But as a live performance, it just kind of…lay there. Even the musicians seemed bored. The bassist and guitarist, both competent pros, spent the set sitting down, so the energy was fairly listless. Kostabi spoke not a word, but proceeded from one indistinguishable piece to the next. It kinda felt like a jam in the basement of your stoner-buddy’s house down the block. I kept wondering why I was there.

Live music is supposed to enliven or challenge or excite you. There was nothing offensive here, nothing actually ‘bad,’ just polite, passionless music. The best thing about the show turned out to be the guitar out front. Perhaps Kostabi should stick to representing music rather than actually playing it in public.