The first debate of Democratic presidential candidates is tonight on CNN. And on Sat night at the Nyack Center, national journalists who live locally will discuss what gets said tonight as well as what Republicans have been saying for months. Spoiler alert: they will probably mention Donald Trump, at least once or twice (you heard it here first).

Journalists from NPR, CBS Sunday Morning, The New Yorker and Bloomberg will be on stage at The Nyack Center when ArtsRock presents One Year and Counting, an Evening of Presidential Politics at 8p on Sat Oct 18. 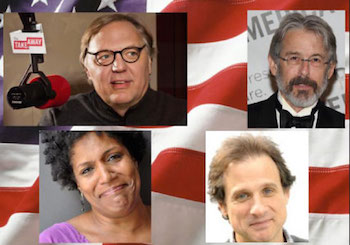 ArtsRock hosts “One Year and Counting, an Evening of Presidential Politics” on Sat at 8p in the Nyack Center. Panelists include JOHN HOCKENBERRY from WNYC & NPR; NANCY GILES from CBS Sunday Morning, The New Yorker’s HENDRIK HERTZBERG and FRANCIS WILKINSON from Bloomberg View.

Tonight at 8:30p, Hillary and Bernie will be on CNN (along with three other candidates — can you name them?) debating why each should be Democrats’ choice to run for president in 2016. The more crowded and contentious Republican field has already held three debates — with nine more scheduled. The next GOP presidential candidate debate will be held in Boulder, Colorado on Oct 28.

Time’s up on naming those other Democratic candidates. The five Democratic presidential hopefuls who will appear tonight on CNN are Hillary Clinton (former NYS Senator and former US Secretary of State), Vermont Senator Bernie Sanders, Martin O’Malley (formerly the governor of Maryland), Jim Webb (former Senator from Virginia) and Lincoln Chafee (ex-Senator from Rhode Island).

Two fun facts about the last but not least Lincoln: in addition to his experience as a mayor and a senator, he was also previously a Republican and a Democrat. And there’s a photo on his website picturing Chaffee with the president — well, at least a placeholder for the photo (“Chaffee & Obama”) however the actual image is missing. I’m sure it’s just a coincidence and it really isn’t a metaphor for his virtually invisible campaign.

WNYC and WQXR’s Elliot Forrest moderates a panel discussion on Saturday at 8p in the Nyack center featuring:

Nancy Giles has been a contributor to CBS Sunday Morning since 2003 opining on everything from politics and race to pop culture and the conspiracy of high heels. She previously toured with Chicago’s Second City and appeared on “China Beach” on ABC.

A senior editor and staff writer at The New Yorker, Hendrik Hertzberg joined the staff in 1969 after serving in the U.S. Navy. His “The Talk of the Town” essays were selected as finalistsfor the National Magazine Award for Columns and Commentary six times (he won this award in 2006).  Hertzberg worked for President Jimmy Carter as a speech writer and The New Republic as a political correspondent and an editor.

A one time political media strategist and as a communications consultant, Francis Wilkinson writes editorials on politics and domestic policy for Bloomberg View. The former executive editor of The Week, Wilkinson previously worked at Rolling Stone as a national affairs correspondent. In his latest podcast, Frank interviewed former U.S. Senator Alfonse D’Amato about the Trans-Pacific Partnership and gun laws.

One Year and Counting, an Evening of Presidential Politics will be held on Saturday October 17, 2015 at 8p in The Nyack Center Nyack, 58 Depew Ave in Nyack, NY. Tickets are $20. Student tickets are $10. More info at ArtsRock.org.