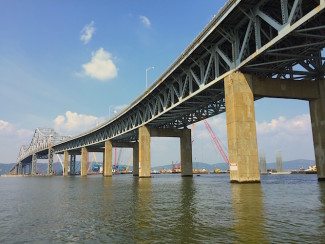 The new Tappan Zee Bridge is now 50 percent complete. Thruway officials conducted a tour of Nyack’s own version of “Modern Marvels on The Hudson” last week providing an update on how construction is progressing on the nation’s largest ongoing infrastructure project.

Crews have now begun work on the eight towers that will rise 419 feet above the twin spans of the new TZB. The towers will rest on two football field length pile caps, which are supported by steel foundation piles. Construction workers spent months inside the 14-foot deep caps carefully installing layers of galvanized steel reinforcement before encasing it all in concrete.

A series of climbing tower cranes and catwalks will be used to install steel reinforcement and to cast the concrete. As each segment is completed, the forms will “jump” to the next level via a jacking system, allowing the next segment to be built on top of the preceding one. This process will continue until all eight towers of the new bridge reach their 40-story height.

Each jump form is composed of two different frames, one internal and one external. The external frame moves upward ahead of the internal frame, providing a safe area for TZC workers to install rebar cages. While the rebar is installed, the internal frame remains with the previous segment of the tower until the next segment is ready to be filled with concrete (as seen in this animation). The frames are then joined together, acting as casting molds that enable the concrete to cure.
Thruway Authority Construction Compliance Engineer Tom McGuinness describes the process used by the floating concrete plants on the Hudson River which support bridge construction work.
Roadway before the road work begins with a peek at the I Lift NY crane towering over the river.

See photos from the construction of the original Tappan Zee Bridge taken between 1952 – 1955 at The Historical Society of the Nyacks’ museum each Sunday from 1-4p through November 2015.

Leonard Cooke, a Nyack resident who was an accomplished photographer, musician, composer and artist, took many pictures documenting the construction from his boat and from other vantage points, adding notes to his photos which tell the step-by-step story of the building of the first Tappan Zee Bridge. Employed as a machinist at the General Motors Plant in Sleepy Hollow, he often commuted across the Hudson River on his motorboat, which gave him a close-up view of the bridge construction. Cooke was a co-founder of a president of the Nyack NAACP, as well as being a member of the Nyack Housing Authority and the Nyack Board of Water Commissioners.

A companion exhibit in the Carnegie-Farian room of the Nyack Library, “Building the Tappan Zee Bridge,” will also be on display during this time.

The Historical Society of the Nyacks’ Museum is located in the Depew House across the street from Memorial Park, at 50 Piermont Avenue. The Nyack Library is located at 59 South Broadway.