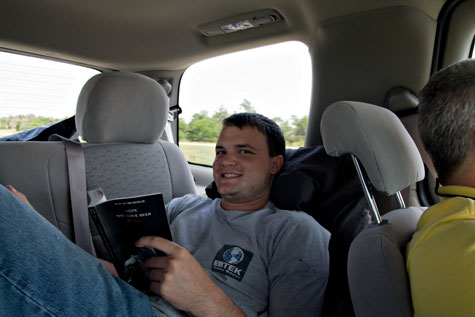 With the start of a new school year season only weeks away, it’s a sure sign that summer vacation is winding down. However, there’s still time to read a good book while you’re waiting for your kids at their sports practices or trying to beat the heat at the beach or the pool.

If you are looking for a good read to finish out the last days of summer, here are a few personal book recommendations from members of the Nyack Library staff.  This week’s picks are from Youth Services Librarian Claudia Uccellani: Just Mercy:  A Story of Justice and Redemption by Brian Stevenson and The Solitude of Prime Numbers by Paolo Giordano.

In Just Mercy, Bryan Stevenson was a young lawyer when he founded the Equal Justice Initiative, a legal practice dedicated to defending those most desperate and in need: the poor, the wrongly condemned, and women and children trapped in the farthest reaches of our criminal justice system. One of his first cases was that of Walter McMillian, a young man who was sentenced to die for a notorious murder he insisted he didn’t commit. The case drew Bryan into a tangle of conspiracy, political machination, and legal brinksmanship—and transformed his understanding of mercy and justice forever.

Just Mercy is at once an unforgettable account of an idealistic, gifted young lawyer’s coming of age, a moving window into the lives of those he has defended, and an inspiring argument for compassion in the pursuit of true justice.

In The Solitude of Prime Numbers, the novel narrates the childhood and young adult life of a boy, Mattia, and a girl, Alice, both of whom had exposure to traumatic situations when they were both eight years old. Alice bears the physical scars of a terrible skiing accident which nearly killed her. Mattia bears the emotional scars of having lost his disabled twin sister, after leaving her alone in a park in order to attend the birthday party of a friend. These traumas manifest themselves again physically later in both of their lives, with Alice being anorexic, and Mattia cutting himself. At school, both are outsiders, much as prime numbers are outsiders from the other numbers. Both lonely, they befriend each other, forming a special relationship — very close but never romantic. The relationship is compared to prime pairs: always together, but never touching.

When the gifted Mattia wins a mathematics posting that takes him thousands of miles away, their relationship appears to have run its course. But when Alice sights a woman who could be Mattia’s sister, the two are brought back together again. Though they clearly love each other, they are unable to express their emotions.

In this article:Nyack Library, Summer reading