The walls of the home on South Broadway may not talk, but Columbus State University expects to help scholars learn more about Columbus’ most famous author, Carson McCullers, as a result of acquiring the author’s former home in South Nyack. 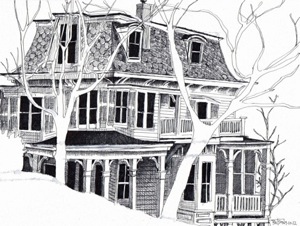 That’s because the recent gift of the house from the estate of Dr. Mary E. Mercer, McCullers’ physician and longtime friend, also includes more than 10,000 pages of the author’s personal documents, artifacts, artwork and even furniture used by McCullers.

With the addition of the recently secured documents, Columbus State’s McCullers collection is now believed to be the nation’s largest, surpassing in size that of Duke University and the University of Texas.

“This will move CSU into the next level of research librar­ies, and researchers will definitely benefit from it,” said Tom Converse, the CSU Archives assistant who’s now organizing the McCullers materials.

McCullers fans at CSU’s Department of English and its McCullers Center for Writers and Musicians are excited about the promise of the Nyack home for CSU students who par­ticipate in the department’s annual New York Comparative Arts Program. The three-story, 6,000-square foot Nyack home is just 20 miles north of New York City, offering preferable housing than the New York University dorms where program participants previously lived for three weeks at a time.

“This presents a thrilling opportunity for our students to study in a great American city in a famous American author’s home,” says Courtney George, assistant professor of English and former director of the McCullers center. “We intend to use the house for lodging for ‘study-away’ programs in the New York City area.”

The recent McCullers gift to CSU, finalized in late 2013, is a byproduct of the enduring friendship between McCullers and her physician friend. Mercer purchased the house in 1968 after the author’s death at age 50 in 1967. Mercer was 90 when she told the New York Times in a 2000 interview she didn’t want to walk by and “discover the hedges cut down and the house painted purple.”

Mercer treated the home as a shrine to McCullers, telling the Times she would only rent the home’s five apartments to artists who were able to answer her questions about the author and which of her books they had read.

Besides the home overlooking the Hudson River, CSU’s gift from the Mercer estate includes an endowment for operating expenses and program development.

Among artifacts that are part of the gift:

The furniture and some of the artwork now reside in CSU’s McCullers center. The Nyack home was McCullers’ primary residence from 1944 until her death 23 years later. Originally a single-family home, the author had it subdivided into apart­ments on the advice, and with the help of, friend and playwright Tennessee Williams. The house was added to the National Register of Historic Places in 2006.

Columbus State’s Schwob Memorial Library is manag­ing the new McCullers papers, books and related arti­facts, making them available for research purposes at the library’s third-floor CSU Archives. The items include the book she was holding when she had a stroke from which she never recovered in 1967, digitized recordings of McCullers and Tennessee Williams from a lecture given together in 1954 at NYC’s 97th Street YMCA, and paint­ings from Henry Varnum Poor, who was a friend.

“The collections’ strengths are going to be the art world and the literary world in the mid-20th century,” Converse said. “She (McCullers) knew everybody. She knew all the playwrights. And (Mercer) was meticulous and kept very detailed notes. Things like the letters, the clippings, the telephone messages. Correspondences with lawyers and attorneys about royalties. She kept everything.”

McCullers, was born Lula Carson Smith on Feb. 19, 1917 in Columbus. Best-known for her novels — The Heart is a Lonely Hunter, Reflections in a Golden Eye, The Member of the Wedding, The Ballad of the Sad Cafe and Clock Without Hands — McCullers was also a play­wright and a short story writer. Her body of work also includes two plays, 20 short stories, over two dozen non­fiction pieces, a book of children’s verse, a few poems and an unfinished autobiography. CSU’s Carson McCullers Center for Writers and Musicians, located in the author’s childhood home at 1519 Stark Ave., is dedicated to preserving her legacy.

For more information about the McCullers center, visit McCullersCenter.org.

This article was originally published in the Spring 2014 edition of Focus, a Columbus State University publication.