This weekend, July 31-Aug 2,  is Waterkeeper Alliance’s Swimmable Water Weekend. To celebrate and provide some context for why this is important, Susan Hellauer shares some of the recent history of swimming in the Hudson River.

Myra Starr and her Sea Mariner friends had no choice but to swim out to their sailboat when their leaky old dinghy would go missing in 1947. It was moored off the Grand-View-on-Hudson Town Hall, where an outflow pipe ran down to the river, discharging raw sewage into the Hudson. The girls dove in anyway, quickly getting out to cleaner mid-river water. “We all just took it for granted that sewage, factory waste, everything had to go into the river. Where else was it going to go?”

Industrial and population growth in the 1950s brought more river pollution of every kind. With mixed results, parents warned their kids out of the river, where they had been swimming forever — at the Hook, at the Bight, from backyards, parks, docks and rowboats. The pollution was more noticeable now, and there was fear of polio or other diseases. 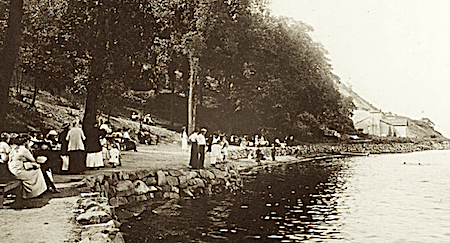 1921 photo of swimmers and picnickers at what is today, Nyack Beach State Park. “There’s a crowd at Hook Mountain on this afternoon. People are talking, walking, looking at the water. A canoe is pulled up on the small beach. Two dark dots in the water may be swimmers. Beyond the park are buildings of the Manhattan Trap Rock quarrying company.” Photo Credit: Nyack Library via hvrh.org

A severe, years-long drought hit the Hudson Valley hard in the early 1960s. As the river level fell, the stinking toxic stew of industrial waste and sewage could no longer be ignored. Rachel Carson published her environmental landmark “Silent Spring” in 1962. The nuclear power plant Indian Point 1 opened in 1963, its water exchange system immediately causing massive fish kills. By 1965, Governor Nelson Rockefeller was calling the upper Hudson a “septic tank.” Thanks to all this, a handful of angry fishermen and concerned citizens grew into a large, loud chorus, agitating to save their once-majestic river, and creating the citizen-driven American environmental movement.

Anger quickly became action. New York State’s 1965 Pure Waters Bond Act, the first of its kind, sought to end the dumping of raw or insufficiently processed sewage by subsidizing treatment plants (like Orangetown’s, which came on line in 1968). Scenic Hudson (1965) and The Hudson River Fishermen’s Association (1966), which later evolved into the watchdog group Riverkeeper, targeted polluting municipalities, factories and power plants. Folksinger and activist Pete Seeger saw the devastated river from his home in Beacon, and dreamed up the environmental and educational Hudson River Sloop Clearwater, launched in 1969.

Grand-View-on-Hudson also played a role in the emerging struggle, with a successful, precedent-setting campaign to prevent a homeowner from filling in marshland on his property and harming river ecology.

Environmental crusaders in those early years often set the return of safe swimming in the Hudson — early in the 1970s, they hoped, at first . . . — as a benchmark for the success of the cleanup. But that goal grew more distant when businesses, towns and villages balked at the high cost of compliance with new state regulations and the 1972 U.S. Clean Water Act.

“What can I do to help
clean up the Hudson?”

The New York State Department of Environmental Conservation [NYSDEC] granted licenses by the hundreds in the 1970s and into the ‘80s, allowing municipalities and businesses pleading economic hardship to continue dumping toxic waste directly into the Hudson. The General Motors plant in Tarrytown, to cite just one local example, poured out untreated paint, oil and other chemicals until the mid 1980s, despite a Justice Department lawsuit brought against them in 1970. Watchdog groups were disgusted by the slow pace of improvement, and by what they saw as intolerable compromises by state and federal agencies.

Media campaigns and lawsuits from Hudson Fishermen’s Association, Scenic Hudson, and others raised public awareness, and prodded business and government to make changes. Economic shifts in the 1970s and ‘80s also contributed: factories relocated to areas where they could operate more cheaply, or closed down altogether.

By the early 1980s, the Hudson was beginning to look cleaner, and in some places declared safe for swimming. But its fish were still contaminated by carcinogenic PCBs. The Nyacks and other river villages had been hooked up to the Orangetown sewage treatment system in the 1970s, reducing contaminants that older sewage plants, like Nyack’s, could not remove. But Rockland officials discouraged river swimming, warning that 150 million gallons per day of New York City’s raw sewage was still flowing north on the incoming tide. After years of design and redesign, a new upper-Manhattan sewage treatment plant opened in 1986.

Amid litigation that would continue for several years, the Village of Croton-on-Hudson closed its riverside garbage dump in 1986. Ten years later, the village opened a public beach near that site. Two river beaches in Ulster County also began operating. 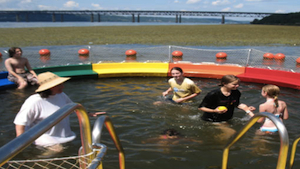 Nyack and the other river villages once did have organized river beaches. Nyack Beach at Hook Mountain had bathhouses, built as WPA projects in the 1930s, and was visited by boatloads of day vacationers. From the 1880s until it burned down in 1920, Piermont’s renowned Fort Comfort Inn and bathing pavilion were a favorite destination for city dwellers, who could reach it by steamboat or rail. 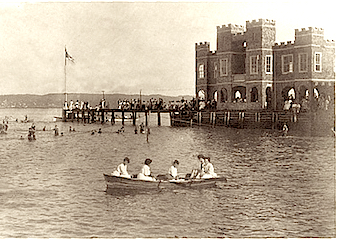 “Fort Comfort Beach is the most desirable place on the Hudson for bathing. . . . The clean, fine sand bottom sloping gradually for a long distance makes it absolutely safe for small children and enjoyable to all.” It also has a “modern Bathing Pavilion, lighted by electricity for bathing at night. — A 1902 brochure promoting Fort Comfort Beach in Piermont, NY

Will Nyack or another river village have a beach again? When asked this question, Nyack Mayor Jen White, who often swims in the river herself, said she would love to see it, and so would Myra Starr. There are many challenges to consider: river hazards, currents, liability, parking, and operating costs among them. But before any of that, there must be clean, consistently swimmable water, which is a good thing even if no human swims in it. Sewers and wastewater infrastructure must be brought up to high standards. Environmental groups and local elected officials are campaigning hard for state and federal funding for this costly but important project. 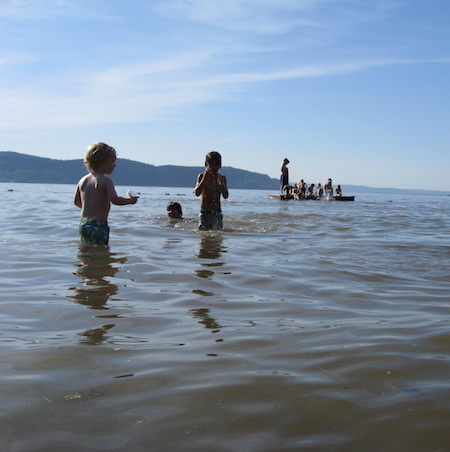 People are swimming in the Hudson with more confidence now — informally, as always, from private docks and boats, and at swim events and “official” beaches where the water is tested frequently. Riverkeeper’s 2015 water quality report, based on regular testing at numerous sites, tells us that the water in the middle of the river is, as in Sea Scout days, cleaner than the shoreline, and cleanest after a dry spell of several days. Overall quality is up and rising (See their website for test results at specific locations.) Issues with old sewer lines in Nyack and elsewhere still cause spikes in fecal contamination after heavy rains. But Orangetown, which took over the river village sewer systems about ten years ago, has taken advantage of state and federal funding and interest-free loans, and is now in the second year of a three-year project to apply slip linings to sewer pipes in Nyack, to prevent incursion of rainwater, which in turn can cause sewage overflows at pumping stations.

Riverkeeper’s latest Hudson River water quality report gives reasons to cheer, and urges New Yorkers to keep on pushing for an even cleaner Hudson River that is “absolutely safe for small children and enjoyable to all.”

Susan Hellauer is a Bronx native and Nyack resident. She has been a volunteer with Nyack Community Ambulance Corps since 2001, and now serves as board member and Corps secretary. She teaches music and writing at Queens College and is a member of the vocal ensemble Anonymous 4.