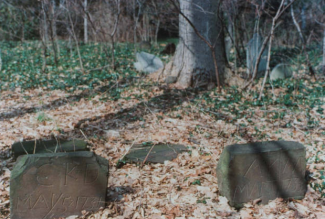 In the middle of a quiet residential neighborhood of Upper Nyack, there’s a small burial plot that dates back to the 18th century. It has a rich and mysterious history that is interwoven with the very fabric of our country.

The Old Palmer Burial Ground sits on land which once belonged to the first settler in the Nyack area. In 1685 Col. Cornelius Kuyper and his wife, family and slaves become the first European settler in the Nyack area.  Kuyper had Dutch ancestry and was the son of Claus Jensen, the first landowner in Rockland County.  Two graves on the site, entitled CKD (Cornelius Kuyper Died) and AKD (his wife, Aeltje Kuyper Died) are inscribed with the dates of death. 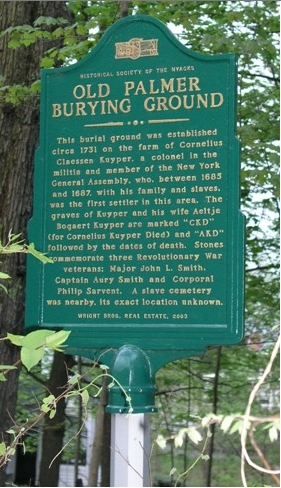 The 125 x 125 ft grave site which includes 66 burial plots starting in 1731,  also holds some interesting relics of American history.  Three Revolutionary War veterans are buried at the cemetery:  John L. Smith, Aurey Smith and Philip Sarvent.  In addition, the grave of a young boy named Jacob DeeClark is present, and, according to the inscription, DeeClark died at 1 year, 4 months and 27 days.

In the 18th century, the graveyard began to fall into disrepair and soon became overgrown.

That all changed in 2003, when a Nyack resident Florence Katzenstein began raising public awareness about the graveyard.  Katzenstein was working on her master gardener certification with the Cornell Cooperative Extension, and was required to perform a community service project to complete the certification.  The Nyack Historical Society, in cooperation with the Town of Clarkstown DPW and Ms. Katzenstein, were able to clear out the overgrowth from the cemetery, and fight back the “biting deer ticks” throughout the graveyard.  Boy Scout Troop 2 enclosed the graveyard with a split rail fence, paid for with $1200 of local fundraising.

The graveyard was declared “haunted” in 2009 when Nyack Paranormal Investigations said they  found paranormal activity near the graveyard site.  They posted a recording on their website of what they claimed to be the voice of someone saying “hello” and another recording of a conversation in Old English.

According to the Nyack Historical Society, a slave graveyard is located near the graveyard, but its exact location is unknown.