When NYS Governor Andrew Cuomo came to Nyack on June 3 to talk about renewing New York’s two percent tax cap, the media generated more than 50 stories about his visit. Most of them, however, missed the really interesting stuff about his appearance at The Nyack Center. We’ll try to make up for that here.

Governor Kathy Hochul? In the run-up to getting the replacement Tappan Zee Bridge project launched, there was speculation that the governor was at least as interested in building his political resume for a presidential run as he was in building a bridge across the Hudson. Now that the 2016 campaigns are under way, no one is talking about Cuomo for President anymore. Which is odd, because his appearance had the feeling of a political rally. 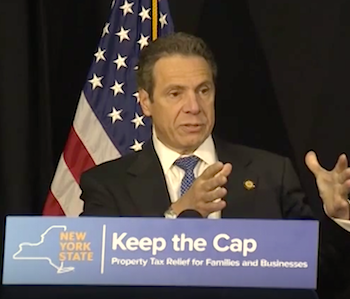 Cuomo was relaxed, persuasive and funny. He was also very Republican — in the strictest historical definition of what it once meant to be Republican — saying that New York’s historically high taxes were chasing businesses and people from the state. It was a fiscally conservative appeal to taxpayers from a liberal governor in one of the nation’s bluest states. Nope, nothing political sounding about that.

Still wondering who Kathy Hochul is? She’s New York’s Lieutenant Governor, and the woman who will take over the reins of the Empire State should Cuomo get a promotion after the 2016 presidential election (BTW, it’s pronounced HOKE-ul, for your future reference).

He’s no Obama, but he’s still funny. There was a buzz among the SRO crowd before the governor spoke at The Nyack Center. And he didn’t disappoint. He was really funny; he made fun of himself; New York state politics in general and his advisers in particular. “I’ve been hearing about the Tappan Zee Bridge since I was a little kid. I was never crazy about driving over bridges … I had a little bit of a fear thing about the bridges and the water. I would run through all of the scenarios…like a bridge collapse. Come to think of it, I had a disturbed childhood.”

Cuomo also poked fun at his staff who insisted that it was OK to talk about replacing the Tappan Zee Bridge as long as you didn’t actually try to do it. “[My advisers] gave out a little laugh and said — [look at the] cute naive young governor — thinks he can really do something! [They said] ‘It would be so expensive! The Hudson is an acutely protected river. There would be lawsuits and you would have to go to Washington and get approvals from the Army Corps of Engineers. Also the fish would have to vote, and the fish would never vote to approve it’,” said Cuomo.

The governor’s other big laugh line came when he compared the high taxes in New York State to other parts of the country. “When you really, really push people and you really raise taxes and make life difficult, they will find an alternative. It turns out that New York was not the only state in the country. There were actually other states. If you look at a map, you look to the west of NY you will see all of these other shapes. Squares and rectangles. They are called ‘other states.’ They are not New York, but they are habitable. People have moved there, and people are living there. And they are reporting back that other people can live there.”

It’s working. Rockland, we have a problem: 2010 data showed that Rockland County had the 4th highest property taxes in the nation, right behind Westchester, Nassau and Bergen County. When Cuomo says that NYS property tax is way out of line with the rest of the country, the statistics bear him out: the median property value in Rockland in 2010 was more than four times the US average. ($8,861 vs. $2,043)

Citing Rockland as one of the state’s two percent tax cap success stories, the governor says during the first three years the tax cap was in effect, the median property taxes paid in Rockland dropped by $2,042.

Cuomo says that New York has high taxes because politicians like to be agreeable. “People in politics like to say yes. ‘I hope you like me and I hope you vote for me’,” mimicked Cuomo. “The taxes went up and up. Not just in local government but in the school districts. We pay more to educate a student than any state in the United States. [We have the] highest property taxes and the highest cost of education in the country. That’s why every other state started to look better as a location.”

It’s The End of The World As We Know It (and we’re feeling fine?): Cuomo’s handlers played some inspiring baby boomer rock and roll to psych up the crowd as they filed into the Nyack Center. However, it might have been more appropriate if they had played *one* REM song in particular.

If you live in a place that has a local government solely because of some 19th century, irrelevant NYS history, it’s only a matter of time before the wheels start to come off your DPW trucks. Simply put, it’s not possible to continue to give administrative staff, police and DPW workers the pay hikes they want (more than 2%) if you live in a place where all of the local revenue comes from a two percent property tax. (Underline this twice for school districts). Unless, of course you over-ride with a 60% approval — which most electeds regard as political suicide.

Nyack is a little bit better off than some villages with a downtown which is home to about 85 businesses, but it isn’t immune from a future financial train wreck either: the village only gets $120,000 a year in sales tax from the bars / restaurants/ and retail in town. The bulk of the proceeds go to the county and the state.

This reality produced an odd reaction from one of the people who should hate the tax cap the most.

“I said to local elected officials, if you want to give someone more than a two percent raise, ‘God bless you!’ Pay them out of your pocket! But if you want to use the pocket of the taxpayer, then you have to get their approval first. And that’s what the tax cap is all about.” — Gov Andrew Cuomo

“I am an enormous fan of the 2% tax cap,” said Nyack Mayor Jen Laird White in a speech introducing the governor. “And I feel strongly that we cannot let it expire.  One might think that’s a bit odd. I’m a mayor, we have expenses in the Village of Nyack, the quickest and easiest way, in the past, to cover those expenses was to raise taxes, simple as that. Quickest and easiest, but absolutely not the best.

“At least once a week while I am strolling our cool village, someone, who really loves living or working in Nyack, stops me to sadly talk about moving somewhere else,” White continued. “Somewhere where the taxes are reasonable and their homes or their businesses are not a financial liability or a constant stress but rather, a place they can live, raise their families or earn their living and grow comfortably old.  The tax cap can keep people here and make people want to move here.  And it can not go away.”

The governor says that if New York State can figure out a way to live with its two percent means, local municipalities should be able to do the same. “Why does everyone’s government have to have their own everything?” asked Cuomo last week. “Why does everyone have to have their own facilities garages? You could share equipment. I’m not asking you to share a bed — share a truck!”

Local officials say that sometimes freezing salaries and sharing facilities just isn’t enough to keep pace with insurance increases, pension fund demands, unfunded mandates and roads which need to be patched after bad winters. In the Village of Nyack, the mayor and trustees have $60-70,000 of “discretionary” income from the two percent yearly increase which must cover increased expenses and long term infrastructure maintenance. If you live in South Nyack, Upper Nyack and Grandview, villages almost completely dependent on property tax revenues, maintaining the current status quo in future years will be even more of a challenge.

It wasn’t Governor Cuomo who started the siege against municipalities solely funded by property taxes — that honor goes to Atty General Cuomo. The New N.Y. Government Reorganization and Citizen Empowerment Act, a signature accomplishment during the Gov’s tenure as NYS Attorney General, lets taxpayers petition for a public vote to dissolve or consolidate local governments. The Cuomo administration’s “New York State Property Tax Cap:Results. Success. Savings,” notes that “…an individual can simultaneously live in a county, town, village, school district, fire district, and library district- all of which have separately-elected governing boards that can raise property taxes.” It’s a situation that residents of Nyack, Upper Nyack, South Nyack, Grandview and Piermont know well: the property owners in these communities pay a tax to each of these entities.

Why Nyack? Nyack’s reputation of being a liberal democratic friendly place (it’s been years and years since a Republican has run for the Village Board) was an interesting choice to hold a political event with a “cut taxes and don’t spend” message.

By all accounts, that message was well received by the enthusiastic and supportive audience. “I enjoyed Gov. Cuomo’s speech and speaking style – he really was funny and engaging,” said Upper Grandview resident Elizabeth Hobson. “I also really liked hearing a lifelong Democrat talking about fiscal responsibility and the need to be careful with the public’s tax dollars in order for all New Yorkers to be able to continue to live and work in the state they love. I thought he expressed well the need for NY state to maintain the tax cap, even though it can be painful to have to really manage a tight budget,” she said.

Nyack High School student Owen Voutsinas-Klose also liked what he heard. “We aren’t going to be competitive with other states if we can’t keep taxes down,  and for too long,  municipalities have used taxpayers as a piggybank for extravagance,” said Voutsinas-Klose.  “Governor Cuomo’s message of modesty and middle class economics was certainly welcome in Rockland County. This is the only way to make New York an affordable place to live.”

The push back on the tax cap has been muted, and usually coming from advocates for state’s teachers’ unions. “The tax cap on schools is  killing them,” wrote Kathy Fleckenstein on Facebook. “They are not able to hire new teachers that are fresh out of college that have been trained in the common core. His giving tax breaks to big business is killing the homeowners in the state those that are middle class homeowners.” In his talk, Cuomo disputed that assertion: property taxes  — the source for school funding — account for more than half of all state taxes ($50 billion for property taxes, $40 billion for state taxes.) And school taxes make up the majority of homeowner’s property tax payments in Rockland County.

The current tax cap legislation doesn’t expire until June 2016 and it’s unlikely that the legislature will take it up during the waning days of the current session.