The first of a two part series about dangerous cargo that regularly rumbles through Rockland.

A railroad crossing is a common thing in the villages near Nyack. The bell and flashing lights incite that little squirt of adrenalin . . . “get across, and don’t be late for school again.” Your mind’s eye then sees fiery explosions, mangled bodies in mangled trains, cars and trucks. . . You glance at your kids in the rear view mirror, and you stop in plenty of time, ready to wait it out, patiently or not.

The freight cars that roll past might carry propane, sulfuric acid and chlorine gas. Or, in the last couple of years, they might be 100+ black tanker cars carrying volatile light crude from the Bakken oil fields of North Dakota, Montana and south central Canada. Up to 30 trains like this roll through Rockland each week carrying more than a million gallons of explosive liquid, past shopping malls, dense residential areas, your drinking water and your kids’ schools.

Since 2010, aggressive hydraulic fracturing has made billions of barrels of raw petroleum accessible from the Northern High Plains. But while it might now be easier get it out of the ground, it’s not any easier getting  the crude oil to market. Existing pipelines are filled and environmental concerns in response to pipeline leaks have slowed down construction of new pipelines to carry crude to big refineries on the Gulf, West and East Coasts of the United States. Incidents like the 2010 Enbridge rupture in Michigan that spilled almost a million gallons of crude oil into the Kalamazoo River have raised public awareness of pipelines. 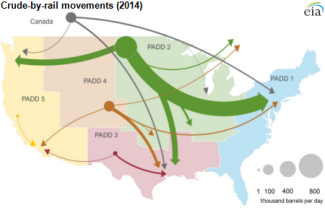 How crude oil was moved across the US by rail in 2014.
Source: United States Energy Information Agency.

Rail transport in tanker cars offers greater flexibility using an existing infrastructure of freight lines. New York-New Jersey-Philadelphia refineries get the greatest proportion of crude shipments despite being farther from the oil fields than refineries on the West and Gulf Coasts. That’s because California’s strong environmental regulations regarding hazardous cargo and refinery construction make compliance costly and time-consuming: a 101,000 gallon oil pipeline spill in Santa Barbara County last month won’t make it any easier. Gulf Coast refineries are already responding to a glut of pipeline crude by offering lower prices for Bakken, according to a McGraw-Hill Platts Special Report on Oil.

East Coast refineries are hungry for raw product, so the long train journey from the Dakotas to New Jersey and Philadelphia (via the CSX “River Line” through Rockland County) makes economic sense for the merchants of Bakken crude.

In 2013 the amount of crude oil shipped by rail increased dramatically.  The U.S. Dept. of Transportation Pipeline and Hazardous Materials Safety Administration (PHMSA) says that 1.5 million gallons of crude oil were spilled from rail cars in 2014, almost twice as much as was spilled in the preceding 37 years combined. 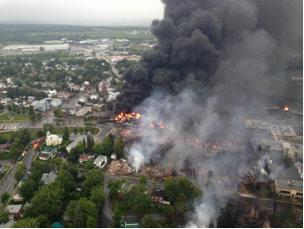 But it took major loss of life to turn all eyes to the dangers of crude oil trains. At Lac-Megantic, Quebec on July 6, 2013, an unattended trainload of Bakken crude slipped down a hill, derailed and exploded burning most of the town center to the ground, resulting in 47 fatalities.

That 2014 PHMSA report also predicted 15 mainline crude oil and ethanol train derailments in 2015. With five derailments resulting in spills, fires and explosions, and at least six other oil and ethanol derailments and collisions already, 2015 is on track to meet or exceed that alarming prediction.

Safety issues of crude-by-rail include:

Next time: What our government agencies, officials, legislators, and environmental watchdog groups are doing to protect us; and what you need to do to keep yourself and your family safe.

Susan Hellauer is a Bronx native and Nyack resident. She has been a volunteer with Nyack Community Ambulance Corps since 2001, and now serves as board member and Corps secretary. She teaches music and writing at Queens College and is a member of the vocal ensemble Anonymous 4.