Pursuing a long sought-after dream may lead you to find your “calling” in life, but discovering a new passion in mid-life can take you to places you never imagined. 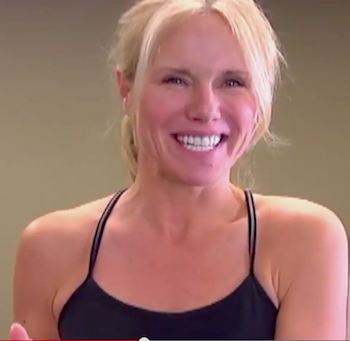 Beth Chamberlin found her calling in fitness after 14 years of playing Beth Raines on the daytime TV drama Guiding Light. During her time on the show Chamberlin became interested in kettlebell training, but she took her interest to a whole new level after the long running soap opera was canceled in 2009. Chamberlin now owns Nyack Boot Camp, a strength and weight training facility that uses kettlebells and high intensity interval training to help build strong and healthy bodies.

As an actress on a popular daily TV show, there is an immense pressure to maintain your weight, so exercise has always been an important part of Chamberlin’s life. Though she had to stay thin and fit for her role on Guiding Light, Chamberlin never enjoyed exercising. She went running every day to maintain her image, but never achieved the strong and lean body that she always wanted.

“I was someone who had done everything. I had personal trainers that were expensive and my body never changed,” she said. “I always looked the same and the best I could do was keep trim for the show.”

Chamberlin became interested in kettlebells during her acting career after seeing how only six weeks of weight training benefited her husband. Following a knee injury, she decided to try kettlebells herself.

“I had the same experience as my husband,” she said. “Kettlebell training was the first type of exercise I found that I really enjoyed.  My body looked so different in only six weeks.”

Almost every kettlebell exercise works your lower body, core, and upper body. Chamberlin says this is why the kettlebell is such an effective workout tool. After seeing the results this training could offer, Chamberlin decided to become a certified personal trainer and kettlebell trainer. She says she found a new love in helping others through fitness and began producing exercise DVDs.

After Guiding Light was cancelled, she decided to focus on her new passion. After much persuasion by a close friend, Chamberlin created a workout class revolving around kettlebell training in 2013. She began with eight students renting space in various locations, but knew she had to put down roots as her classes grew in size. She settled on a permanent location in Nyack in January 2015.

Chamberlin uses high interval intensity training to engage the entire body with a circuit of exercise stations where two students work at each station for a timed round before moving to the next position. Nyack Boot Camp classes use jump ropes, battling ropes, spin bikes, stability balls, medicine balls, dip stations, ladders, sand bags and the kettlebell to increase the heart rate and engage all parts of the body.

“Our philosophy is that you come to us three times a week and we’re hitting everything. We are balancing out your strengths and weaknesses, everybody has one side or areas that are weaker or stronger and we’re trying to balance that out,” Chamberlin said. “We’re trying to give you an overall workout every time you come to us.”

Exercising in groups not only causes people to push themselves beyond their expected potential, but also creates a community of people with similar exercise goals. A person who is just starting out can be in the same class as a student who has participated for two years because within the circuit form of exercise a person must work to the best of their own ability at each station.

Although she does not teach a one on one class, Chamberlin describes her classes as personal training in a group setting. She and her husband, Dr. Peter Roy, look at each individual’s body to see their muscle development and to try and tailor certain exercises for each person in order for everyone within their classes to get the type of exercise that their own body needs.

Not only is kettlebell and strength training beneficial for muscle development, but these specific exercises are also good for overall health.

The training regime can benefit students of all ages; Nyack Boot Camp has some students who are in their early 70’s with chronic bone density issues. “Within six months after they started with us they had 30% increase in bone density,” she says. “This is improving their quality of life and increasing what they’re able to do.”

Though Nyack Boot Camp has been a positive factor in Chamberlin’s life, it was difficult to transition from an acting career to owning her own small business. While working on Guiding Light there was an in-house public relations firm that controlled all of the promoting for the show and for her character. In contrast, having her own business means that Chamberlin is constantly learning new techniques about owning a small business and on how to advertise through various platforms of social media.

“As we get older we sort of stay with what we know and with something like this it’s forcing me to grow and to learn new things all the time,” she said.

After 14 years on Guiding Light, Chamberlin realized that there were fewer opportunities for women over 40 in the acting field and it was time for a change. Although she loved her acting career, Chamberlin says that teaching strength and weight training has given her a chance to change people’s lives. “It’s really exciting to feel that I can be increasing their self-esteem and in some cases to be increasing their quality of life,” she said. “I am grateful every day for this business and I can say I genuinely love my students and I feel like I am of service to my community in doing this.”

Avalon Singer is a sophomore journalism major and staff writer for The Ithacan at Ithaca College.