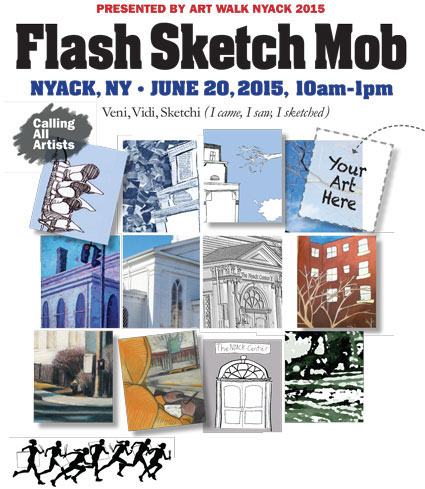 The Flash Sketch Mob returns on June 20th, adding Main Street to a growing visual arts atlas of Nyack. The first sketch mob, composed of over 100 artists, was held in June 2012. Creatives of all ages and skill levels stood 12 paces apart along both sides of Broadway from Cedar Hill to 2nd Avenue. This year, the sketch mob will continue our composite landscape portrait of the village by lining both sides of Main Street from Gedney Street to Franklin Avenue. The art works will be scanned and projected on a large screen at Nyack Center that night. Free early-bird registration ends June 1st. Sign-up today.

The goal of the Flash Sketch Mob is to produce a self portrait of the entire village of Nyack created by artists and non-artists alike. People of all skill levels and ages as well as non-traditional and traditional materials are welcome. Yes, your Etch-a-Sketch, lip liner, digital devices and tablets are acceptable.

The Flash Sketch Mob concept came from a boast I made in a column posted in October, 2011.

Once I got that hubristic rant out of my system, I realized that I needed one hundred John Henrys to create a representation of our one-square mile village that would rival Google streetviews. 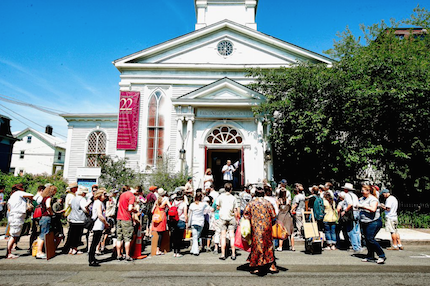 The last Flash Sketch Mob included seasoned artists and the entirely unschooled. Many lapsed artists were encouraged to pick up their implements again. Taking the solitary practice of art making on to the sidewalk inspired many to keep creating. For weeks after the first Flash Sketch Mob, people were seen throughout Nyack engaging in landscape portraiture.

This second Flash Sketch Mob is part of ART WALK 2015, a three-day arts festival organized by Paulette Ross, owner of p.ross boutique. This will be the 10th anniversary of the village-wide cultural event. “This year’s theme, “10 to the 10th power…a decade of art,” can take you back in time or to the future,” said Ross. 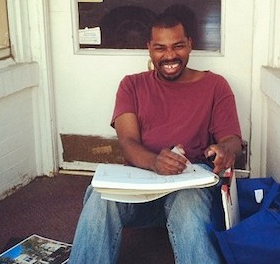 In large part, the Flash Sketch Mob is an homage to the Hopper Happens festivals organized by Kris Burns. These public art events celebrated the legacy of Edward Hopper on the occasion of the 40th anniversary of the Edward Hopper House Arts Center.  Hopper Happens included flash mobs, pop-up projections and readings. 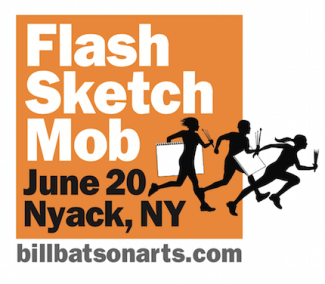 The premise behind the Flash Sketch Mob is that the unexamined place is not worth inhabiting.  Our careful examination and hand made reproduction of our built and natural environment will create a unique human record.  As we sharpen our powers of observation, by joining the Flash Sketch Mob, or examining the perspective that dozens of artists will present of our village, we might become more aware of her needs and more zealous in her defense.

Bill Batson is an activist, artist and writer who lives in Nyack, NY. “Nyack Sketch Log: Flash Sketch Mob is Back” © 2015 Bill Batson. In Dec. 2014, Batson published “Nyack Sketch Log, An Artist and Writer Explores The History of A Hudson River Village.” Copies of the book can be purchased at billbatsonarts.com.