NyackNewsAndViews has a limited number of 2015 paid summer internships.

NyackNewsAndViews is looking for a summer intern who wants to write today, but who once worked night and day building cities, tunnels and bridges out of Brio, K’nex, Legos and unlimited imagination. If you see the 328 foot lifting boom on the Tappan Zee Bridge I Lift NY supercrane as something you might have once built out of plastic interlocking pieces, read on. 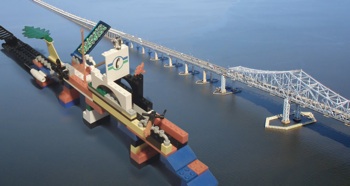 The biggest public construction project in the United States is going on every day in the river by Nyack — a slowly unfolding real life episode of Modern Marvels on the Hudson which includes great feats of engineering and innovative approaches to bridge building.

We have several paid internships this summer writing about our community, profiling interesting people in and near the Nyacks and helping with marketing and technical tasks. But this week, we’re talking Tappan Zee Bridge — and we are looking for someone who will help tell the story of how this new 100 year bridge is being built.

If you are college bound, this internship is a great experience to put on your college applications. But it’s also a way to learn more about where you live, learn to tell stories in a way that gets people’s attention, and yes — in a small way — make the world a better place. Interested? Email dave@NyackNewsAndViews.com for more information.

What can interns do? For the next several weeks we’ll show off some of the great content our summer staff has produced in the past, writing stories, taking over the controls as the daily WordPress editor or creating video content. This week we feature the work of Max Cea, Gus Fischer and Matt Marchese.

Last summer interns Gus Fisher and Matt Marchese produced The Great Chefs of Nyack for NyackNewsAndViews and the Nyack Chamber of Commerce. In this episode, Nyack Gourmet chef and owner Cris Spezial shows how to make pan-seared wild Chilean Salmon over a pool of gazpacho.

Originally published July 29, 2013 —  Oysters living near the Tappan Zee Bridge will soon be on the move. With funding from New York State, 200,000 Eastern oysters are being relocated approximately three quarters of a mile south of their current location.

The Tappan Zee Bridge Project team must dredge the area in order to make room for the barges, pile drivers, and other heavy equipment that will be used for construction. Dredging is an underwater excavation process, in which bottom sediments are evaluated and disposed. The team is in the midst of a test piling program, involving 15 test pilings, which are identical to the piles that will be used to hold up the new bridge. By October, test pilings will be removed and permanent piles will begin to be installed. Dredging is slated to begin August 1st.

In order to save the oysters from being discarded with neighboring riverbed sediment, New York State has allocated approximately $100,000 to relocate the oysters. The oyster raking and relocation is part of a bigger environmental mitigation project that will cost $11.5 million.

“Our environmental permit requires certain environmental mitigation measures; the oyster relocation project is one of them,” said Brian Conybeare, special Tappan Zee Bridge Project advisor to the governor. “We are also doing wetlands enhancement, sturgeon tagging, sturgeon monitoring and a whole lot of other things to protect the wildlife in the river as a part of this project.”

Those involved with the project, such as Conybeare, were enthusiastic about the impact that they were having on the local environment. “The good news is that the Hudson River is coming back from its history of contamination. The river is getting cleaner, the oysters are starting to thrive again, and we are trying to help that process along as part of our environmental commitment.”

Oysters Can’t Undo the Damage That Congress Can Do 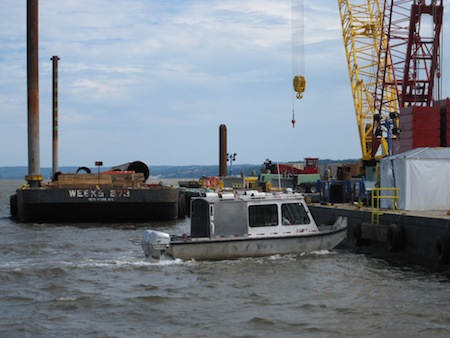 While representatives from the Tappan Zee Project and the governor’s office were promoting the oyster relocation program, Congresswoman Nita Lowey (D-Westchester/Rockland) was busy holding a press conference on the banks of the Hudson to protest cuts in the federal budget to clean water protections. According to Lowey, the proposed budget cuts would cost New York State almost $166 million in federal funding for clean water infrastructure improvements, which could have adverse effects on local residents’ health and ability to finance upgrades to the water system.

“The road to prosperity requires investing in our infrastructure and protecting the public health. The alarming levels of antibiotic-resistant bacteria in the Hudson River are the direct result of insufficient investment in infrastructure and a clear threat to the health of this vital natural resource and local residents,” said Lowey.

“This is not a partisan issue. This is potentially a serious health risk to communities on the Hudson River,” said Irvington Mayor Brian C. Smith. “While this is a serious issue, I am certain that it is but one of the many issues that sequestration has unnecessarily thrust on the taxpayers of our nation.

“This new study highlights the work we still have ahead of us. The sewer infrastructure in the towns and villages along the Rockland and Westchester shoreline is dated and are in need of critical updating,” said Piermont Mayor Chris Sanders. “To help provide access to a healthy Hudson River, we need the assistance of the federal government in identifying and repairing this aging infrastructure.”

The average oyster filters approximately 1.3 gallons of water per hour. The oyster protection program is encouraging, as are the other environmental projects totaling more than $11 million that the state has allocated. Yet in the face of massive budget cuts, officials are left to question whether the relocation of 200,000 oysters could sufficiently turn the tide in the cleanliness of the Hudson River and its surrounding environment.

Max Cea is a May 2015 graduate of the College of William & Mary.