Point, Counter-Point About A Leaf-Blower Ban in Nyack

This spring and summer as you hear the incessant whine of gas powered leaf blowers,  and breathe in the dust and fumes they create, remember that the Nyack Village Board has decided not to take any action on a seasonal ban restricting the use of the carbon-emitting beasts. After years of workshops and committee work where draft legislation was composed by residents working together, the board has essentially decided to do nothing.

At the April 9 Village Board meeting, the trustees publicly announced their ‘Action Plan’  on Landscape Practices. The plan does not include a seasonal ban on blowers, but promotes a laudable plan called “Love’em and Leave’em”,  encouraging homeowners to mow over their leaves rather than put them out on the street. At a previous village workshop, a landscape professional testified that while this new policy was effective for leaf control, it would do little or nothing to reduce blower usage since landscapers mostly use them on hardscapes: driveways and walks.

In a progressive village which has taken a pledge to be a ‘Climate Smart Community,’ this lack of a blower ordinance is a very sad state of affairs. One gas leaf blower operating for thirty minutes puts out more emissions than an auto traveling 2,000 miles. One hour of gas leaf blower operation is the equivalent of forty cars idling for one hour. By enacting a seasonal ban on blowers our community can do something about climate change. This simple step will likely have more effect than all of the green initiatives the village is pursuing put together. A seasonal ban is something concrete that we can do, and be proud of. And the positive impact we will have will extend beyond our community as other villages and towns in Rockland follow suit after our example.

The mayor and trustees have ignored all evidence put before them by the leaf blower committee and even ignore their Village Sustainability Coordinator who has urged them to enact a seasonal ban.

This is not such a big deal- it can be done, and the sky won’t fall. The leaders of the these nearby villages and towns have enacted seasonal bans that have now stood for years.

They did this. We can do this.  And if the climate continues to change and sea levels rise over the next many years, at least we’ll be able to say “We did what we could do.”  Will it take a little courage? Yes- but not much. Urge the mayor and trustees to do the right thing and curb use of the polluting, noisy and unnecessary beasts.

I couldn’t agree more with Mr. Gromada that leaf blowers are a nuisance and an un-necessary distraction. Bully for him and the other passionate activists who want to make our community quieter, greener and a healthier place to live. Unfortunately, they just aren’t going about it the right way.

The truth is, the non-Friends Of The Leaf Blowers aren’t telling you the whole story. “After years of workshops and committee work where draft legislation was composed by residents working together, the board has essentially decided to do nothing.” True that. Well, sort of.

Last June the Nyack Village Board discussed this issue and — in a uniquely Nyack moment — voices were raised and names were called on the topic of How Green We Should Be. The anti-blower contingent asked for a seasonal ban; the village board pointed out that there are unintended consequences from this action that the ban proponents were blithely ignoring.

Officials contend a “Just Say No” to leaf blowers plan is unenforceable in Nyack because it would fall on the Building Department to implement, a group that is already short staffed and over worked, especially during the current building boom in the village. Also, Nyack Mayor Jen Laird White says a Ban The Blowers ordinance isn’t enforceable strictly as a noise ordinance. “Noise is noise. You can’t have a noise ordinance that only applies for part of the year,” she says. 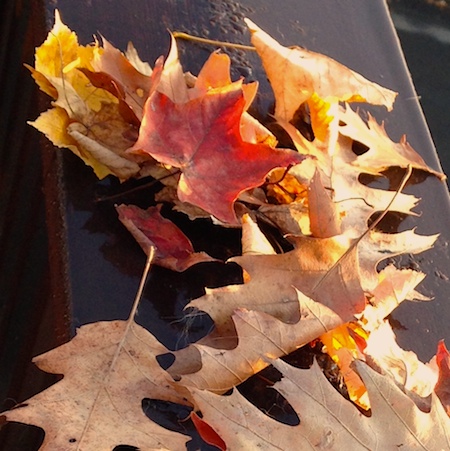 Finally, Team No Blow isn’t considering the implications of green vs. GREEN for the residents and businesses. A leaf blower ban would raise costs to keep properties tidy. Is peace and quiet worth overtime code enforcement by police and building department employees? Also, the dozen or so passionate community members who wave the Don’t Blow On Me flag don’t necessarily represent the broader community. Or at least, they haven’t made the case that they do. Finally, just because It’s Been Done Before, it doesn’t mean it has worked out well: can we leverage some of the experience of these Westchester communities and hear if these laws are enforced and have made a difference? It would be comforting to hear their success stories as proof that it can work here too as well as learn from their mistakes, rather than follow cluelessly in their footsteps.

What the village board did approve was “Love ‘Em and Leave ‘Em,” a voluntary campaign to promote mulching leaves. The thinking is the more you mulch, the less you will have to blow. Village Sustainability Coordinator Marcy Denker, Mayor Jen Laird White and Trustee Marie Lorenzini held a cider and donuts community demo last November on the topic; Denker has also written several articles promoting the program.
[/half] [/full]

“There’s universal agreement that people want to see noise and pollution reduced — the methodology for getting there is where we part ways,” says Laird White. “We think that personal outreach to landscapers will work best.” Laird White says the village already has agreements with several of the large stakeholders in Nyack about reducing or eliminating leaf blowers.

So three cheers for Mr. Gromada and Company for fighting the good fight. Don’t give up — but don’t call out our usually left-leaning elected officials for acting in a conservative, responsible manor by thinking through all of the unintended consequences of a leaf blower ban. Also remember this is your fight, and if sympathetic public officials tell you to go away and overcome legitimate objections, rise to the challenge and come back with answers, not insults.

Sure, I would love to Ban The Blowers. They *are* annoying and bad for the environment. But if I have to choose between closing my window a few times a year and paying higher taxes, it’s really not much of a decision.