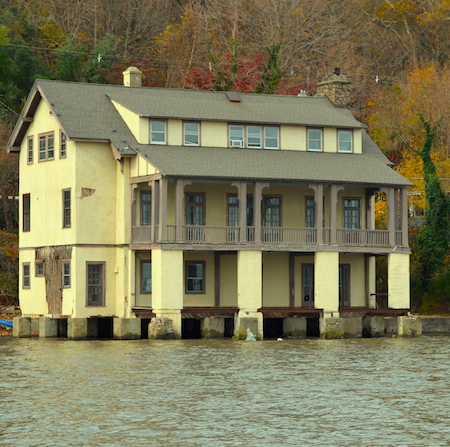 “The citizens of Grand View-on-Hudson are deeply grateful to FEMA for its commitment to helping us rebuild our village hall devastated by Hurricane Sandy,” said Grand View Mayor Larry Lynn. “We thank all of those who helped us secure this funding, first and foremost our great friends in Washington, Senator Kirsten Gillibrand, Senator Charles Schumer, and Rep. Nita Lowey for their diligent efforts on our behalf.” Lynn says that the Governor’s office and local officials including County Executive Ed Day, Orangetown Supervisor Andy Stewart, Assemblywoman Ellen Jaffe, State Senator David Carlucci, and County Legislator Nancy Low-Hogan were also instrumental in providing support to get FEMA funding.

The ground floor of the Grand View Village Hall was flooded with 18 inches of Hudson river water following Hurricane Sandy. One of two decks on the building was completely ripped and the building was twisted on its foundation. After reconstruction, village hall will be raised out of the flood zone and set further back from the river. The FEMA grant will cover 90 percent of the costs incurred by Grand View-on-Hudson to replace the facility and its contents, or $4,399,518.

“A village hall is an important gathering place and symbol of any community, and it is excellent news that Grand View-on-Hudson will finally be able to replace theirs,” said Senator Chuck Schumer. “The storm completely devastated the building, and this federal disaster assistance will go a long way in taking the cost burden of rebuilding off of taxpayers and reassuring local residents that the federal government will be there as they continue their recovery efforts

“After village hall was severely damaged during Superstorm Sandy, I’m pleased to announce that Grand View-on-Hudson is finally getting this long overdue reimbursement from FEMA,” said Senator Kirsten Gillibrand.

“I’m pleased these federal funds finally arrived to assist Grand View-on-Hudson residents build their new village hall,” said Congresswoman Lowey. “I fought hard to secure the $60 billion Sandy assistance package in Congress, and I will continue to work with communities affected by the storm to get the recovery assistance they need.”

Now that most of the funding is in place, Lynn says Grand View can start plans to build it back better — including making village hall ADA compliant. “We will be putting an elevator in the new building to accommodate the disabled. It was not there before, so it is not part of FEMA funding because their mandate is to restore what was there. The village may have to fund this, and will be happy to do so,” he said.

If all goes well, the new village hall will open by the end of 2016. “The next steps are final architectural and engineering plans which will lead to bid documents, then bidding,” said Lynn. “We will salvage many of the architectural and decorative details that define the original village hall. After that, demolition will begin,” he said.

“The lion’s share of the work on this project was done by Village Trustee Catherine Whitney with the assistance of Doris Ulman, Village Attorney, and Julie Pagliaroli, Village Clerk-Treasurer,” said Lynn. “We could not have gotten this far without the efforts of this team.”