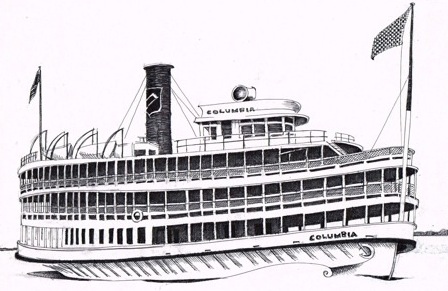 Richard Anderson found a vessel for all of his dreams, the nation’s oldest surviving passenger steamship, the SS Columbia.  Anderson, who had a life-long passion for historic boats, created a non-profit to bring the steamship to the Hudson Valley from Michigan. Like many visionaries before him, he did not live to see his plan reach fruition. Richard passed away at Nyack Hospital after a short illness on January 21, 2013.

The SS Columbia was constructed in Michigan in 1902. The ship, which included a proper ballroom, became an important recreational attraction and Detroit icon providing a 90-minute, 18-mile excursion that brought families to Bois Blanc Island in Canada. When the 100 year old Boblo Amusement Park shut its gates in 1993, the Columbia went out of service. 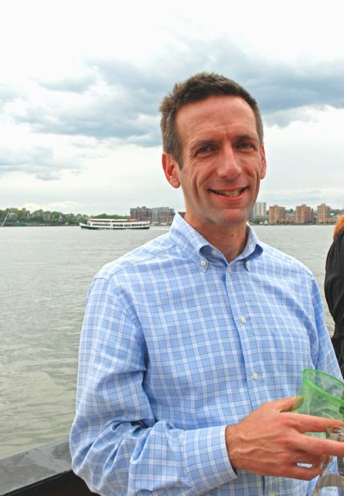 Richard Anderson spent much of his life near New York’s waterways. He was born in Brooklyn Heights, a community with a promenade that overlooks the New York Harbor. At the age of 10, he became a dedicated volunteer during the development of the South Street Seaport Museum located on the East River. He moved to Nyack as a teenager and returned to live in a house on the Hudson after years of work in the worlds of finance and fine art.

The SS Columbia Project was incorporated in 2002 with three main goals:

Richard was an avid art collector and became a respected gallery owner. The arts are given particular emphasis in the educational programming that would be offered from the SS Columbia. The website describes an effort to create a “dialogue between art, the environment, and the reverence for nature’s beauty characteristic of the Hudson River School painters, while seeking to revive this dialogue with contemporary artists working in ways that are representational, abstract, or conceptual.”

If combing the arts, historic preservation, environmental stewardship and economic development is not enough to make this project compelling, the ship’s connection to a pivotal moment in the civil rights movement seals the deal.

A Supreme Court ruling that emerged from a claim of discrimination by a passenger on board the Columbia in the 1940’s set the stage for what was arguably the most important civil rights legal precedent: Brown v. Board of Education.

When Sarah Elizabeth Ray was removed from a cruise to celebrate her graduation because of her race, she sued and with the support of the NAACP, the case went to the Supreme Court. She was victorious. In affirming the ruling of the lower courts, the Supreme Court signaled its willingness to protect the civil rights of African-Americans, paving the way for Brown v. Board of Education.

In the absence of their president, lovingly referred to as the captain, the SS Columbia Project board continues to chart a course that will bring the steamship to the Hudson. 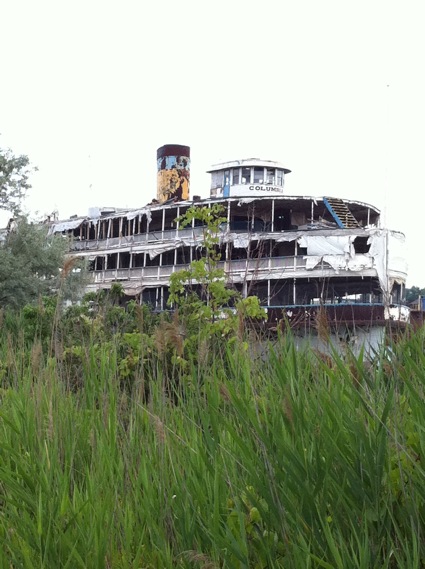 The SS Columbia is currently in a Shipyard in Toledo, Ohio. The hull has been scraped, sandblasted and surveyed. In August 2015, the SS Columbia will journey through the Great Lakes, up the St. Lawrence River, down the Atlantic Coast and then past Nyack and up the Hudson River to a shipyard in Kingston, New York to continue restoration work.

Anderson’s vision to bring the Columbia from Michigan to New York is of an epic, almost mythic scale. The project is reminiscent of Werner Hertzog’s film Fitzcarraldo, the story of a man’s effort to launch a floating opera house on the Amazon River. Hertzog’s recreation of Fitzcarraldo’s attempt to pull a steamship over a mountain using early 20th century tools and technology was captured in the documentary, Burden of Dreams.

When completed, Richard’s vision will create a floating maritime museum, classroom and exhibition space accessible to communities on both sides of the Hudson River. The SS Columbia would promote the arts, protect the environment, generate economic development and preserve an important site in American civil rights history.

For more information or to make a donation in keep Richard’s memory a float, visit SS Columbia Project.

Special thanks to Ian Danic and Holly Corey.

Bill Batson is an activist, artist and writer who lives in Nyack, NY. “Nyack Sketch Log: Richard Anderson and the SS Columbia” © 2015 Bill Batson. In Dec. 2014, Batson published “Nyack Sketch Log, An Artist and Writer Explores The History of A Hudson River Village.” Copies of the book can be purchased at billbatsonarts.com.