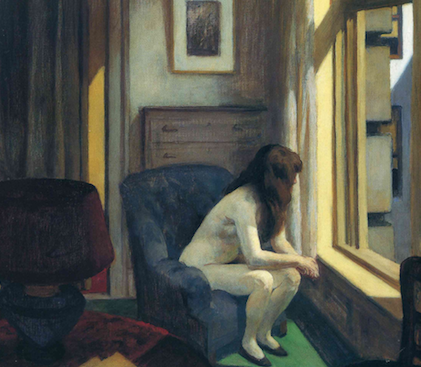 Before Cindy Sherman, there was Jo Nivison Hopper. She played as many roles as Sherman, but unlike Sherman, she was not her own muse; she was her husband’s. From a woman staring vacantly, lost in thought, staying up all night over coffee or undressing in front of a window, Jo captured every look. Much like Sherman, who is known for transcending the lines of identity by using her body as a canvas, Hopper uses his wife Jo to characterize many stereotypical female roles. Both Hopper and Sherman portray looks of isolation and alienation: Hopper’s women suggest isolation by choosing to be alone: Sherman’s women suggest alienation with the solitude that comes from being rejected. 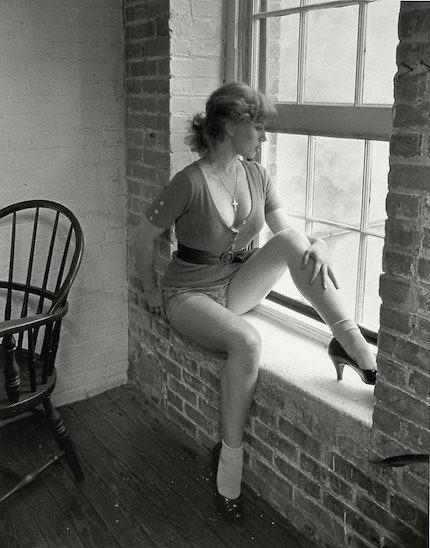 While the reasons for capturing these women in solitude may differ, the dramatically vacant stares are uncannily captivating and strikingly similar. Perhaps it is the way both Hopper and Sherman use light, shadows and architecture to frame their women. We look at the women they portray and feel we have seen them before. Like women in a movie or advertisement, they are archetypes, yet we really don’t know what is going on inside their worlds. These women were as much actresses as they were inspirations for fine art.

And surprisingly, both Hopper and Sherman set the stage for the exhibitionism so prevalent in the iconic pop star, Madonna’s, routine. Madonna acts out the roles that Hopper and Sherman depict so well. The loneliness and isolation they portray reminds her of her childhood growing up in America. In 1983, Madonna used Hopper’s Girlie Show to portray the theme of a naked woman performing a cabaret show. The image inspired her to create vaudeville erotica show. 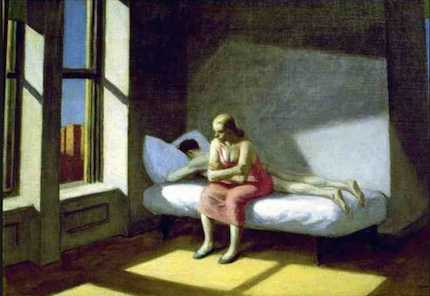 Perhaps this is why we are so drawn to Sherman’s and Hopper’s work. They represent traditional America – they are familiar to us, yet with a hint of mystery that draws the viewer in. Both Sherman and Hopper had a love for the movies. Hopper was known as a movie junkie, rushing to the movies for inspiration whenever he had a creative block. Sherman came of age when television was just beginning to permeate popular culture. Perhaps their obsession, with film is what gives their women such a similar look. Women are observed in familiar settings, their images capture a “deja vu”, yet all of their works are unique. 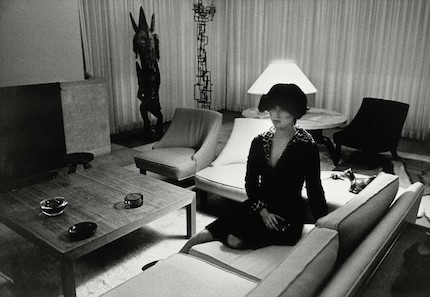 Hopper’s pictures spy on people in uncurtained rooms. They are epiphanic moments in someone else’s life, stills from a movie we can’t quite remember. Sherman, belonging to the first generation of Americans raised on television was fully immersed in mass-media culture from a young age. She also recalls watching films such as Hitchcock’s Rear Window as formative experiences. While Sherman found inspiration in Hitchcock, Hopper and Jo were delighted when Hitchcock used Hopper’s House by the Railroad as a muse for his 1960 movie Psycho. 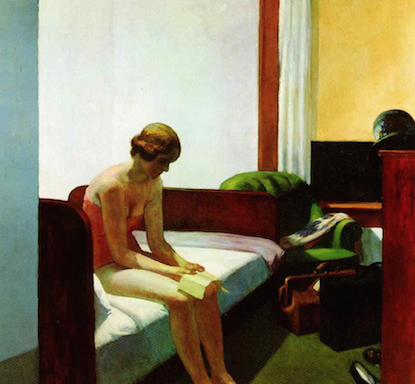 Sherman started making her “untitled film stills” in 1977. They are perhaps her best body of work capturing the many facets of the American woman. In her stills, we see a series of images that are familiar to our collective cultural imagination. While we can look at these pictures individually, together they seem to be part of a theme. Sherman sees a world saturated with images but we don’t really know what is going on inside the woman. Hopper, too, expressed the difficulty of capturing both the inside and external appearance of his subject. 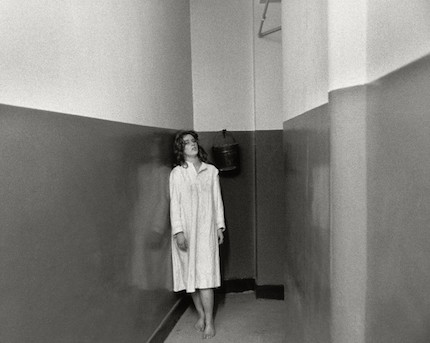 The pictures themselves really do reveal the story. A side-by-side comparison of six Hopper works and six works of Cindy Sherman reveals a striking similarity. In each juxtaposition we see a woman, divided by almost a century, with nearly identical poses. The theme is so familiar; it is almost as if these two artists who never met one another worked side by side in the same studio. It seems certain that Hopper had a great influence on Sherman. For example, Woman in Sunrise and Untitled Film Still #48, both capture women staring into space lost in their own thoughts. We do not know what is going through their minds, but assume a longing that is other than their selves: a dreamy, intense fixation on the outside world. The same theme appears again in Eastside Interior and Untitled Film Still #15. Hopper’s Hotel Room (1931) loneliness of an urban world – woman sits half undressed on the edge of a bed. Too tired to unpack her suitcase, she is checking the time of her train the next day. This lonely lost look repeats itself again and again.

Hopper and Sherman’s longing to lose themselves in the escapism of the cinema echoes in each one of their works. Perhaps, we like these images so much because we can imbue our own fantasies onto them. The familiar looks of these women make it easy for us to feel that we could be or might have been any one of them at any time. Hopper, Sherman and Madonna show us that a woman of any class, at any time and at any moment can be a muse. “Strike a pose vogue”.

Jane “CoCo” Cowles is an artist, writer and creative consultant. You can find out more about her by visiting JaneCocoCowles.com. This article originally appeared in Art Exhibit Magazine