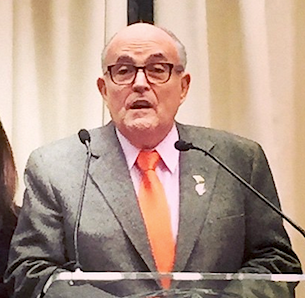 I wanted to like Rudy Giuliani. I really, really did. There was much to admire – first, as an organized crime busting federal prosecutor and then as America’s Mayor, the man who provided leadership for NYC in the days following 9/11. What was not to like? Throw in the fact that he was a fellow Italian-American and we’re talking about a potential role model here.

Then reality sunk in. Rudy Giuliani is simply not a very good person when both his words and his actions are held up to scrutiny.

Giuliani’s latest assault on the character of President Barack Obama defies any positive purpose or intent, except to keep him in the public eye and line his pockets with money from what that exposure will bring to his many business ventures. This is the same tactic employed by other conservative pundits like Ann Coulter and Michelle Malkin. In the case of Ms. Coulter and Ms. Malkin, they say outrageous, indefensible things simply to sell more books to their eager and largely uninformed followers. However, Rudy Giuliani is so much more than a political pundit – at least he was supposed to be. For a political leader who once had (and may have again) aspirations to be President, to question a sitting President’s patriotism, loyalty, love for his country and fellow Americans is not only foolish, it is potentially treasonous.

Mr. Giuliani’s approach to his criticism of Mr. Obama was on a slippery slope from the beginning. First, he made assumptions that, somehow, Mr. Obama was raised differently from “most Americans,” certainly from Mr. Giuliani. This, according to Mr. Giuliani, caused Mr. Obama’s loyalty to this country to be somehow different and lacking. Mr. Giuliani claimed that he could infer this from the comments the President has made during his administration. Really? You would think that as a lawyer and former federal prosecutor, Mr. Giuliani would know that cases built on inference are at best tenuous!

Second, by implying that Mr. Obama’s personal experience would certainly influence his thinking, we might assume the same of Mr. Giuliani. Well, a quick check of Mr. Giuliani’s personal background would reveal what most people would call a train wreck –infidelity, divorce, troubled children, etc. Then, he dug himself an even deeper hole by playing the race card, using it to defend his statements.

Of course, the former mayor has his defenders, mostly among his legion of followers at Fox News. And, this is part of the issue. A man who once displayed great leadership qualities has become nothing more than a political hack on a network that thrives on this type of unsubstantiated vitriol. A former Democrat, turned moderate Republican, turned Conservative, Mr. Giuliani seems to change his stripes to suit the highest bidder. And, Fox News gives him the platform. He will use that bully pulpit to attempt to condemn the President on inconsistencies in his policy, often without real basis or fact. Such is the case with his latest statements. It’s the height of hypocrisy.

This is still a free country and all of us have the right to speak our minds. I certainly do and always encourage others to do the same. This, of course, applies to Rudy Giuliani. But, he is also someone that, as a leader, should be held to a higher standard of accuracy and honesty with that opinion. So far, his latest round of blather has backfired. The great majority of Americans are outraged by his comments and many wish that he would simply go away. If he had further political aspirations, I think that he can pretty much forget about them now. Somehow, however, I’m not sure that it bothers him all that much. As long as his has the platform that Fox News will provide him, he can continue to do what he does best – make money for himself. Rudy, my Rudy, where have you gone?