Amidst the snow, freezing temps, ice flows on the Hudson and a feeling that winter has worn out its welcome, Ray Wright and Frank LoBuono have seen some glorious sights in the skies and near the river. The Eagles Have Landed.
[half flow=end]by Frank LoBuono

The morning had broken to bitterly cold temperatures and a biting wind that roared straight down the Hudson from The Great White North. It had been a long, hard night turning the lobster trick but, now, it was time to get home. It was the President’s Day holiday, so the traffic would be light. The sun was already blazing but hardly making a dent in the subfreezing temperature. I got in my car, turned down W57th St. and headed for home.

I was approaching 125th St. when suddenly, off to the left, above the river, some movement in the sky caught my eye. It was a large bird and she was soaring.  It was a Bald Eagle!! They are unmistakable with a huge wing span, dark brown feathers, and a bright white head. She circled high over an ice flow before gently gliding down onto it. To my surprise she joined another bald eagle who was roosting there. They must have been a mating pair.

At 60 m.p.h. it was not possible to linger, but I saw them clearly enough to know that they were eagles. Thanks to conservation efforts, the bald eagle, which had been so close to extinction, has made a remarkable comeback, particularly on the Hudson River. The magnificent, shear cliffs of the Palisades and abundant supply of fish make an ideal habitat for these raptors.

Virtually extincr a few years ago, they are now frequently seen near the Hudson River. However, I have never seen them this far south before. Competition among the birds is driving them to find new hunting and nesting grounds. And, they have – right in the middle of one the busiest cities on earth. Remarkable.

The bald eagle is a fitting symbol for America in so many ways. It is a large animal, wild, and free – much like the land it represents. And, its recovery from near extinction represents the American can do spirit. When it seemed that we might lose the very symbol of our country, every effort was made to insure that wouldn’t happen. It didn’t. And, we are the better off for it.[/half]
[half flow=end]by Ray Wright

Northern eagles returned to North Rockland in early January. My wife and I have been following the migration since the eagles first appeared at the West Nyack Shoprite on January 5, 2010. Since Lake Tappan froze early this year, migrating eagles have not come back to this spot, although there are one or two nests in the area with eagles, but not the numbers cited in earlier years.

From West Haverstraw to Jones Point, traveling along the Hudson River, we have found 10 to 25 eagles on each of four trips this winter.

If you’d like to see some eagles in the wild, you should look for trees close to the river and floating ice. 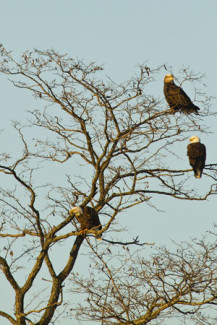 A few locations where we have spotted bald eagles include:

If you are lucky, you won’t have to venture far from home. Three people have reported seeing an eagle flying over the Nyacks; another reported a fly by in Grandview.
[/half]