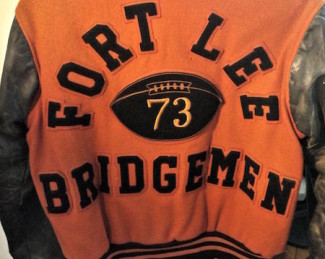 The action was a welcomed break from the monotony of training camp. We finally got to compete against another team instead of each other. Still, it was a “controlled” scrimmage and not a “real” game, so coaches were allowed on field to provide instruction wherever and whenever needed. I was not scheduled to start but was slated for some playing time during the latter part of the contest. Because of my success as a freshman (I was a starter on both offense and defense), the coaches wanted to see what potential I might have on the varsity level. I was long (almost 5’10″), lean (about 140 lbs.), and cat-quick. Man, I could really run then. And, I was intensely competitive. Despite my slim physique, I was anxious to prove that I belonged with The Big Boys.

Since it was preseason and not an official game, the stands were virtually empty. No marching bands blared school fight songs. No cheerleaders where present to root on their teams. The sounds of the quarterback barking his signals went uninterrupted by cheers or jeers. At the snap of the ball, the collision of the players smashing into one another reminded me of the sound of a steel door slamming. Then, whistles blowing, the coaches stopped the action and rushed in to either congratulate or admonish players, depending on the outcome of the play. It was a bizarre, violent ballet. I guess that’s what I loved about it. Despite the violence, there was also an inherent beauty within the game.

As the scrimmage began, I got to watch the action unfold from behind our defense, rather than from the sidelines. It was an interesting perspective. The coaches would point out, in real time, why a play was successful or not, depending on what they had observed. I marveled at the speed and aggression of the players. It was all happening much faster than in practice, and much much faster than the games I had experienced as a freshman player. I couldn’t help but think: These guys are really good. Am I REALLY ready to compete? I would soon find out.

After an hour of intense action, most of the frontline players  yielded the field to the younger ones, including me. The coaches called for me to “get my helmet on and be ready to get in there!” My heart began to race and my heart pound. This was everything that I had trained for. I had worked out with weights all summer and designed a special diet of mostly protein shakes to prepare myself for the rigors of the season. I had increased my weight and strength drastically. I was as ready as I was going to be. I buckled my chin strap, focused my energy, and waited for the command. Finally, it came: “LoBuono, GET IN THERE!”

Without hesitation, I sprinted to take my position in the defensive backfield. I was going to play strong safety. My main responsibilities were to cover the tight end on passing plays and support the run by tackling on the others. In addition to speed and strength, the position required a certain technique to play it successfully. This is where the coaching came in. And, I was well coached. The man responsible for play of the defensive backfield was “Coach Larry.” A former player himself, Coach Larry might be best described as a refrigerator with a head. Down deep, he was a kind and caring soul. On the surface, he was an exploding volcano. His speech was so animated that it usually involved sharing a little of his spittle with you. He couldn’t help it. He loved the game, loved coaching, and it showed. Instructions came out of his frothing mouth in torrents – watch for the screen, watch for the draw, watch for the square-out, watch for the square-in, watch for the short pass, watch for the long pass – just watch for EVERYTHING!

I buckled my chinstrap, inserted my mouthpiece, and made the final adjustments to my equipment to assume my position. Coach Larry, as was his custom, grabbed me by my facemask and, placing his face an inch or so from mine, added one last instruction: don’t forget, if the corner forces the running back inside, I want you there to make the tackle. I understood. We were setting a trap.

I charged into the defensive huddle where my teammates were planning their next alignment. Now, the huddle was a mixture of veteran players and rookies, and it was easy to spot the difference. The uniforms of the veterans, who had already played most of the scrimmage, were streaked with sweat and caked with mud. The rookies, were shinning like new dimes. We broke the huddle with a hardy clap and a unifying shout of “DEFENSE.” I took my position as the last man – literally. They don’t call the position “safety” for nothing. No one was to get passed me. I liked having that responsibility.

Their quarterback barked his signals, Red 19, Red 19, Hut! Hut! Hut! and the ball was snapped. It was an end sweep! He pitched the ball to the running back who was circling behind him. The back made a mad dash for the sideline. As he reached the end of the line, our cornerback, doing his job, was right there to force him away from the sideline and back into the field of play. I saw the whole thing unfold – just as the coaches had diagramed it on the blackboard. I was ready. I placed myself at an angle where I thought the runner would be forced to turn. I had calculated perfectly. He was heading right for me! I prepared myself to deliver the blow and stop the play. I crouched into a tight ball, turning my legs into steel-like springs. I flexed every muscle in my body. I was going to stop this running play cold. Perfect. Then – WHAM!!!

I’m not sure how much time had actually elapsed, but the next thing I remembered was lying on my back, looking straight up at the sky with Coach Larry straddling me, screaming, OH MY GOD, SON! YOU’VE GOT TO PROTECT YOURSELF OUT THERE. YOU ARE GOING TO GET KILLED! All the while, little drops of his saliva were spraying all over my prone body. I was so confused. I had no idea what happened. One second I was ready to play the hero in my first varsity action, and the next, I’m wondering not just where I am, but who I am! When Coach asked if I knew who I was, I answered, “Monday.” Apparently (I had to actually be told this), just as I thought I had set up the running back for a big hit, one of the offensive lineman was doing the same to me. In my eagerness to tackle the running back, I lost sight of all that was going on around me,  the BIG picture. The offensive lineman, apparently, had not. When he saw the opportunity, he took it and knocked me into an altered state of consciousness.

A few moments later (it felt like an hour), I was able to regain some composure, and I begin to pull myself together, wits first. Coach Larry helped me to my feet where I readjusted by equipment. I had been hit so hard that I had to practically redress myself. Coach Larry had backed off a bit and now had his arm around me as we walked off the field. He spoke more gently and, again, admonished me to always be aware of my surroundings on the field. He didn’t want to see me get hurt.

After a few plays I was able to return to action. I overcame that embarrassment and many others and went on to have a decent career playing football in high school and college and as a semi-professional. I even coached it for a time, always remembering that on the field, as in life, you must be prepared for the unexpected. Things don’t necessarily unfold the way we want them to. Life has a way of knocking you down. It’s going to happen. It’s the getting up that counts the most.