Nyack, Jan 14  — The Skeleton Twins, a Sept 2014 theatrical release that was set and shot in Nyack, will be screened in Nyack tonight at 8p. Rivertown Film’s presentation at The Nyack Center will also include a post-screening discussion with Producer Jared Goldman.

Although its release last fall may not have been on the radar of most locals, it created a new Web awareness for this Lower Hudson River village: there are over 23,000 Google search results for the phrase “Skeleton+Twins+Nyack.” 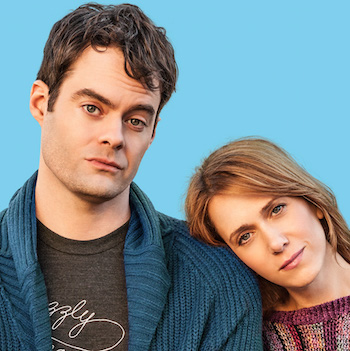 Rivertown Film presents The Skeleton Twins at 8p on Jan 14 in the Nyack Center.

When the married Maggie reluctantly allows her estranged, gay brother Milo to move into her home, their intuitive connection re-opens wounds and secrets. Without veering into melodrama, Hader and Wiig demonstrate that being simpatico with someone also allows them to inflict the most painful emotional wounds.

Here’s an excerpt from an interview broadcast on Sept 6 between NPR’s Scott Simon and Bill Hader, where the actor talks about his role and the choice of Nyack as the movie’s setting.

Bill HADER:  The opening scene of the movie is not like anything that I usually get sent, you know, with a suicide attempt. And so I was intrigued. I liked the characters. I thought the writing was really strong. And I said, this is exactly the kind of thing I want to be doing.

Scott SIMON: Milo, your character, leaves the small town in New York State where apparently he and his sister have grown up. It looks like – it’s Nyack, I think?

Rivertown Film: How It’s Made

Skeleton Twins Producer Jared Goldman and Producer/Editor Jennifer Lee will be on hand at The Nyack Center for a post-screening discussion.

The conversation will be moderated by producer and local resident Declan Baldwin, whose film credits include Adventureland and Today’s Special. It’s been a big week for Declan: he co-produced Still Alice, a movie for which Julianne Moore won a Golden Globe on Sunday night.

SIMON: Leaves for the bright lights of Hollywood but he can only get work as a waiter. Your story, of course – very different. You went to Second City, you wound up on “SNL.” But do you play a character like Milo and have a sense of, what if?

HADER: Oh, absolutely. Yeah. I moved to LA in 1999, didn’t know that many people. You know, I was looking in the back of Hollywood Reporter to try to get PA jobs on movies. It was definitely in the back of my head for years – like, this might not work out. And a thing happens when you move out to LA, you get a job on TV shows, where you can kind of – you’re making a living but it takes up all your time. And then you realize, wow, I’ve been out in LA for – in my case, it was like, five years – and I haven’t done anything creative.

So I related to that in Milo, especially when he comes back to Nyack and seeks out his teacher. He needs someone to say he’s good, you know? That, you were good, you were good – he needs to hear that. Because when he was in Nyack he was the best actor, you know, in his little town. And then you get out to LA and it’s filled with people who are really good and savvy. And it can be really discouraging.

SIMON: Yeah. A relationship – we’ll just explain – between him and his old high school teacher is fraught with hazard and complication. Is that fair to say?

SIMON: I wonder if after doing this film you learned something new. You have any different feeling for suicide?

HADER: I think it’s different. For Milo’s case – it’s kind of a case-by-case thing – but for Milo, I think it is like a cry for help. And he always knows because of his father, their father, they know that that’s an option. But he’s not his father. And he has his sister. They have each other.

SIMON: Even though they spend much of the film…

HADER: Yelling at each other.

SIMON: …Yelling at each other and trying to do worse.

SIMON: The question this is going to raise for a lot of people watching this film, among so many others, is – how can two people who so palpably love each other keep doing the wrong thing for each other?

HADER: Yeah. That’s interesting. And that’s very much how (writer-director) Craig Johnson is. Every day on that movie – and it’s much like the relationship – we would shoot something that was very funny and or moving. And then, we would shoot something like that and Kristen and I would be laughing, having a great time and then he’d be like, all right, now’s the scene where she says the most unforgivable thing in the world to you (laughter). You know? And we would be legitimately hurt.

But the thing I like hearing about this film is that people always say it strikes such a specific tone, where it is dark and it is sad, but it’s also very funny. That release of tension and with a laugh plays huge, you know, because there is a lot of tension between us. But it feels very real and it’s just kind of really nonjudgmental.