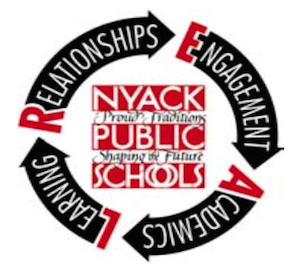 Over the past three years more students are taking Advanced Placement courses at Nyack High School and more students are earning a score of three or higher on the five point scale used to grade these exams. That achievement has won the praise of parents and educators as well as The College Board, which selected Nyack HS for its annual AP Honor Roll.

Only 547 schools in the US and Canada made the cut. The rankings are based on AP data from 2012 to 2014 across 34 AP tests including world language and culture.

“The fact that Nyack High School has increased the number of students participating in AP while simultaneously improving the number of students earning AP Exam scores of 3 or higher is a testament to the hard work and effort of our staff and students,” said Nyack Schools Superintendent Dr. James Montesano, Superintendent of Schools. “This recognition of our high school by the College Board further defies the myth that intellectual ability is a ‘thing’ but rather all children are born with sufficient natural ability to achieve significant school work provided they are given the opportunity, are supported by teachers that genuinely believe in their ability, and are willing to work hard.”

The College Board uses three criteria for including a school on the AP Honor Roll: