[info]Did you know … 59 years ago today, Governor Averell Harriman and Actress Helen Hayes joined the mayors of Nyack, South Nyack, Suffern and Tarrytown and a motorcade of 400 cars to dedicate the new Tappan Zee Bridge. “Nyack and the surrounding area assumes its position on the ‘Main Street of the Empire State’ today and the new Thruway bridge brings it within easy commuting range of metropolitan New York,” said NYS Thruway Chairman Bertam D. Tallamy. He was evasive about the name — because it wasn’t officially named the Tappan Zee Bridge until two months after the dedication.

“Just in case you hadn’t noticed, [this event] was probably one of the most important days in the history of Rockland County,” wrote Don Klein, a columnist for the Rockland Journal News on Dec 13, 1955. “No longer will Rockland be that practically isolated county on the other side of the Hudson River from Westchester, only accessible by archaic ferry lines. Now one can ride to and from Rockland County on the newest and possibly most modern highway in the world,” he said.

G. Winthrop Welles, the Executive Secretary of the the Chamber of Commerce of the Nyacks, made a presentation to the governor. The Nyack High School Band provided the music marking the momentous occasion. Click to see the official program from the dedication ceremony.

Not everyone was so enthusiastic. A photo from the day captured a protest by more than a dozen women carrying signs that said, “SAVE OUR VILLAGES! The NY Times gave the protesters equal time in its lead sentence in the article covering the dedication: “16 friendly pickets joined Governor Harriman yesterday in dedicating the $60 million Thruway bridge linking Rockland and Westchester Counties.” A related effort by a group called the “Committee to Save the Villages” was successful in helping to defeat an initiative to connect the NJ Turnpike with the NY Thruway cutting through Palisades, Piermont and Grand View, NY. Although the NJ Turnpike extension was never built, it’s legacy is still with us: it’s why NYS Thruway Interchange 10 takes West bound vehicles in a complete circle past the South Nyack exit before leaving the Thruway.

It only cost 50 cents to drive across the Hudson between Nyack and Tarrytown in 1955. It’s ten times that today, but still a bargain compared to the GWB. At least for the time being.

If you want to relive the excitement of the birth of the original Tappan Zee Bridge in glorious black and white, there’s promotional video on YouTube from the New York State Archives:

“The NYS Thruway, the superhighway of the great Empire State, is extended another 28 miles from Suffern and Yonkers. The most spectaular project of the thruway is the three mile bridge spanning the historic Tappan Zee section of the Hudson River between Tarrytown and Nyack. This is the largest bridge of its type in the world. It has over two acres of pavement spread over six wide lanes — three in each direction.”

Introduction to the Internet, 1:30p

Westchester-based a capella vocal ensemble Sing We Enchanted performs “An Elizabethan Christmas: Early Songs & Carols” on Fri in the Carnegie-Farian Room of the Nyack Library. The program includes sacred and secular carols by Praetorius, Victoria and Byrd, spirited madrigals by Thomas Morley, and other traditional 19th century English carol arrangements by Parker, Shaw and Rutter, among others.

Now in its 21st season, Sing We Enchanted’s repertoire includes early music, sacred and secular works in a variety of languages and contemporary American and English selections a capella.

Advance discounted tickets are available at the link below. At the door, general admission: $25, students/seniors: $18 and members: $15. Tickets and more info at CarnegieConcerts.org.

Did You Know comes to you each Monday on NyackNewAndViews, sponsored by the Nyack Library. Have a question or a fun fact you want to know? We’re looking for suggestions for our weekly Did You Know fact. Write to info@NyackNewsAndViews with your suggestions. 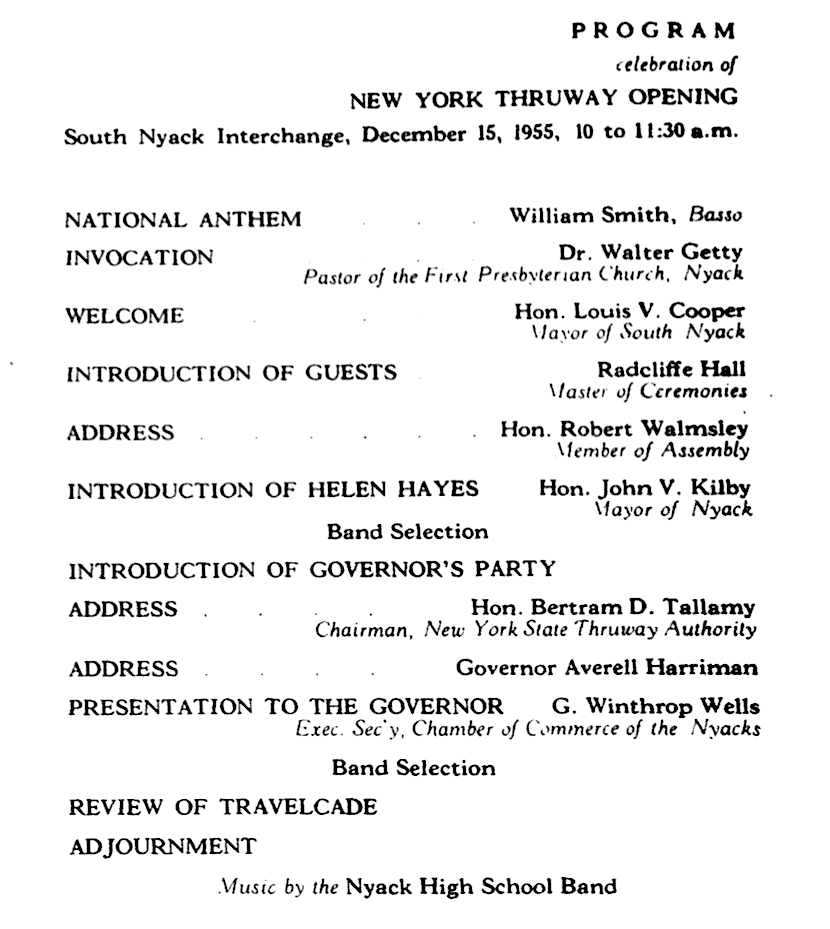 The official program for the opening day dedication ceremony for the Tappan Zee Bridge in South Nyack, NY on Dec 15, 1955.