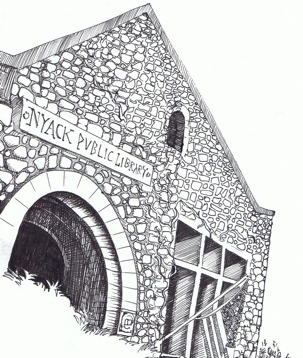 Did you know … the history of your library? More than 200 years ago, Nicholas Green and Tunis Depew sowed the seeds that would become the Nyack Library. In 1873, A Methodist minister, Stephen Merritt Jr., developed the collection of books that included 200 volumes that advocated abstinence from alcohol.  In 1903, Andrew Carnegie, the richest man in the world at the time, contributed to the construction of 1,689 public libraries in 1,419 communities across America including Nyack’s.

Communities across the country competed for a contribution from Carnegie and his funding did not come without strings. Local governments needed to agree to allocate annually 10% of Carnegie’s donation to maintain the library he would build.   If his terms were met, Carnegie would pledge $2 per resident.  The population of the three river villages, Nyack, Upper Nyack and South Nyack was 7,500 at the end of the 19th century. The three village boards voted to increase library funding from $1,200 per year to $1,500 or 10% of Carnegie’s eventual $15,000 gift.

The cornerstone was laid on May 21, 1903 for a building that was designed by acclaimed local architects the Emery Brothers and Mr. J. B. Simonson.  As iconic as the rocky stone facade of the original library building has become, another object made of stone that stands vigil near the entrance merits honorable mention

On May 7, 2011, hundreds attended the grand opening of a spacious annex of metal and glass that is barely visible from the Lincoln boulder.  Carnegie would still recognize the building he funded because architect Michael Esmay has executed an expansion that neither competes nor clashes with the original structure.

The new Nyack library building was designed to meet the needs of the information age: the number of computers with Internet access has tripled, there are increased public meeting spaces, areas that serve different age groups have been enhanced, and display and media elements that make it easier to browse the collection have been installed.

The interior of the new wing, designed by Barbara Corwin is bright and inviting, like a reading room in a solarium.  The experience of sitting with a book at a wooden table, looking at a panoramic view of the Hudson through a floor to ceiling window is simply elevating.

Originally posted in the Nyack Sketch Log, by Bill Batson

Advertisement. Scroll to continue reading.
In this article:Did you know?, Nyack Library