The story of our civilization is told through our tools. There was a stone age, iron age, industrial revolution and now, a computer age. Each epoch is defined by what we have picked up and used with our hands.

An exhibit at the Historical Society of the Nyacks has assembled hundreds of tools. You are welcome to feel the weight of these wooden and metal implements that helped a parent earn a wage, or brought relief to an ailing patient. You have until November 29 to enjoy this orchestra of domestic and industrial instruments.

Here is a survey of some of what you will find if you visit this tool box on display. The text that follows is based on panels written by the individuals who loaned their utilitarian objects.

Today, a reversible speed electric hand drill is a normal tool, but 130 years ago, it didn’t exist.  All hand tools were manual. Speed differential depended on the operator, not drill mechanics. By adjusting the handle length and multi-position beveled gears, the drill speed and torque can be changed to suit the job at hand, bracing the drill against the shoulder or chest. 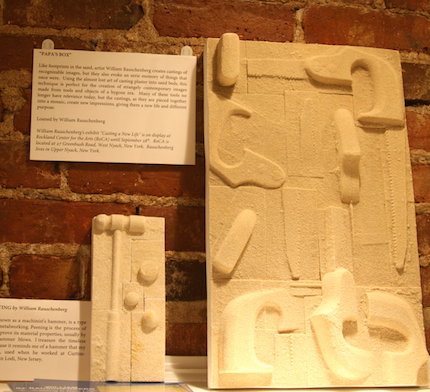 Rauschenberg uses tools from his “papa’s” tool box to create 3-dimensional works of art. The disassembled tools are decontextualized and transformed into bas-relief panels. The casting technique allows the viewer to appreciate the elegant form and ingenious function of each individual part of the hand operated and mechanical tools.

Papa’s toolbox and two of Rauschenberg’s casting are on display in this exhibit. 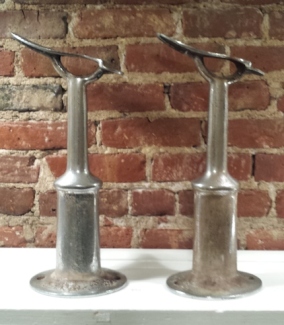 Originally used at a shoe-shine stand at Grand Central Station in New York City, these foot rests were purchased at Donna Cashin’s yard sale before she and Marty moved south. Donna’s grandfather was a shoe-shine guy at Grand Central, and kept them when he retired. Donna was the school nurse at Nyack High School for many years, and Marty was a State Police Officer, who had a side job as the butcher at Reliable Meat Market when Al and Rhoda Fertile ran it.

Loaned to the Historical Society by Kathy Platy 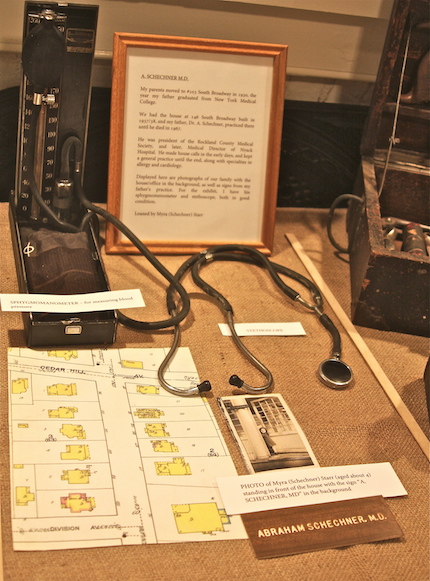 He was president of the Rockland County Medical Society, and later, Medical Director of Nyack Hospital.  He made house calls in the early days, and kept a general practice until the end, along with specialties in allergy and cardiology.

On display in the Nyack Toolbox exhibit are photographs of her family with the house/office in the background, as well as signs from her father’s practice and his sphygmomenometer and stethoscope, both in good condition. 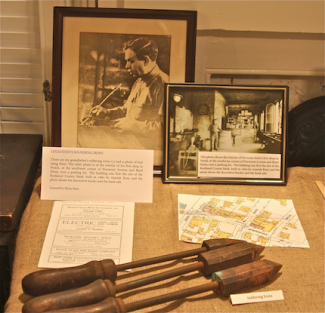 These are Myra Starr’s grandfather’s soldering irons (3) and a photo of him using them. The other photo is of the interior of his first shop in Nyack, the New York Radiators Works, at the southwest corner of Piermont Avenue and Burd Street, now a parking lot.  The building was first the site of the Rockland County Bank, built in 1860 by Azariah Ross, and the photo shows the decorative border and the bank safe. 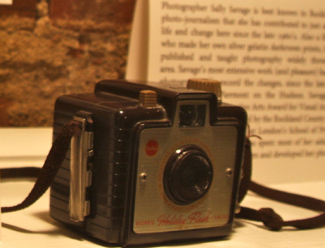 “I loved this Kodak Brownie that my father gave me when I was fourteen, so when it became clear that I was not going up to Oxford or Cambridge to read history, my father said:  ‘you’ve got to choose a profession, ’ I chose photography.”  Thus began a successful career that has led to New York City, Piermont and Nyack, and to many other cameras. 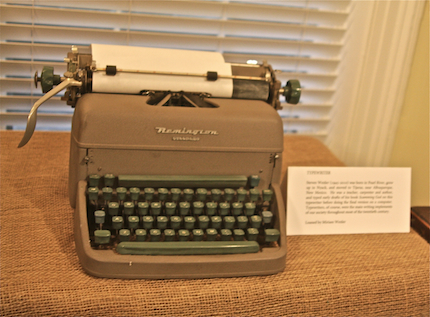 Steven Wexler (1945-2010) was born in Pearl River, grew up in Nyack, and moved to Tijeras, near Albuquerque, New Mexico. He was a teacher, carpenter and author, and typed early drafts of his book Scamming God on this typewriter before doing the final version on a computer. Typewriters, of course, were the main writing implements of our society throughout most of the twentieth century.

“A Nyack Toolbox – Implements from the Past” will be open through Sat., Nov. 29.  The exhibition is open to the public on Saturdays between 1-4p or by appointment. The Historical Society of the Nyacks Museum is located at 50 Piermont Avenue in the historic DePew House, across from Memorial Park. The entrance is under the front porch.  For more information, visit nyackhistory.org.

Special thanks to Win Perry and Jennifer Rothschild of the Historical Society of the Nyacks.

Bill Batson is an activist, artist and writer who lives and sketches in Nyack, NY. “Nyack Sketch Log: Tools of Many Trades” © 2014 Bill Batson.