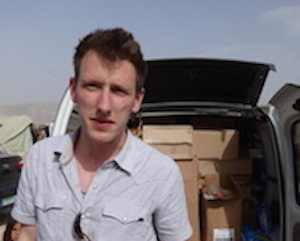 Part of my duties when I edit for a major television news agency is to “sanitize” footage that comes in from all over the world. Often, we receive what is known in the industry as “raw” material. This is meant in both the literal and figurative sense. It is literally raw because it contains all of the material that was photographed, including the mistakes, etc. And it is also figuratively so because it may contain footage of brutal violence that is deemed unacceptable to the general public. It can be shocking to say the least.

Last Sunday, I was asked to review the video where Peter Kassig was beheaded by ISIS in the same brutal fashion of those captives who preceded him. I will spare you the gory details. Let it suffice to say that it made me sick to my stomach. It wasn’t the act itself that made me ill – I’ve done this before and I’m not particularly squeamish. Rather, it was the mindset behind the act that truly made me sick. I just can’t rap my mind around the thought that one human being could be so cavalier about causing the brutal, violent, degrading death of another.

At first, I’m sure that my reaction to this latest act of violence on the part of ISIS was typical; I was mad as hell and I wanted revenge. I wanted that black-clad, face-covered monster to suffer the same fate as his victim. I wanted someone standing over him, threatening him with a razor sharp knife until he was thrown on the ground and had his head sawed off as he has done to so many others. But, then something strange happened. I started to cry. I wept – only for a few seconds, but deeply.

Why? Why should I cry? I did not know this young man or his family. I have no connection to him. Yet, I felt deeply troubled by his passing. I thought of his parents and the incredible grief they must be experiencing. Not only did they lose him, but the world saw him executed in the most brutal fashion. Horrible. However, I wept not only for him, but for the whole world!! Although committed against an individual, this is an act that diminishes the whole world because it is a product of our continued violence against ONE ANOTHER.

The execution of Mr. Kassig was part of a larger “recruitment” video produced by ISIS. The video contained lots of marching, singing chanting, and flag waiving. There were lots of big, splashy explosions, too. Of course, ISIS is trying this “flash and dash” approach to lure young men to their cause by making the violence look “romantic” – sort of a real-life video game. But, it also contained disturbing images of people, many of them children, who were torn apart by US airstrikes. The images were every bit as graphic and violent of those people being executed by ISIS. Blood and bodies were everywhere. It was designed to make you angry – and I’m sure that it was effective.

So, I wept. Don’t you see? We are mired in an endless cycle of violence! We disagree with their policies and they with ours. So, to enforce our claims, we bomb them without mercy. We kill their women and children. Perhaps, we do so inadvertently but we do so just the same. I have seen THEIR bodies, too. They (ISIS), in turn, inflict as much pain on us the only way they know how – with terror. It’s a classic case of an eye for an eye making the whole world blind.

I am not Gandhi. I am not Martin Luther King. I wish that I had their power to convince people that violence, in the end, ONLY creates more pain, more death, and more hatred. But, in a tragic case of irony, even their strength and conviction could not save them – both died violently. However, I HEAR them. I BELIEVE them. The MESSAGE that they conveyed has lived long after their physical demise. We must not be afraid to love – even in the face of brutality. We need to change. The way we are going about things now is certainly not working. So, why not? The world seems to get more hostile with every passing day. And it will continue to spiral downwards until we lose our fear – our fear to love. It’s our only hope. We can change the world. We only lack the will and courage to do so. .