One can hardly pick up the paper or turn on the news without seeing the word Ebola. If you had asked the average American what Ebola was six months ago most would have had absolutely no idea. The disease itself has been present in West Africa since December 2013, but it barely made the news in the US until there was a confirmed case of Ebola in September. The humanitarian medical organization Doctors Without Borders (MSF) called the current Ebola outbreak “unprecedented” and warned of the implications of this back in April. No one, including the World Health Organization (WHO), paid heed. Now, with the very real risk of the epidemic spreading outside of Western Africa and into Europe and the United States, everyone seems very, very concerned. 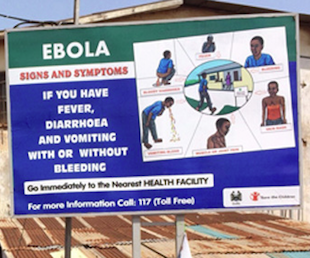 Ebola is a viral hemorrhagic fever that was named after the Ebola River in Zaire, which is now known as the Democratic Republic of the Congo. The first outbreak of the disease appeared in Sudan and Zaire in 1976. Since then, Ebola has popped up sporadically throughout Africa. However, the current Ebola epidemic in West Africa is the worst outbreak in its short history, having claimed 5,000 lives to date. It’s possible that this estimate is too conservative due to incomplete reporting in many remote parts of Sierra Leone, Guinea and Liberia, the three countries most affected by the epidemic.

Ebola itself is characterized by fever, vomiting, diarrhea and often severe hemorrhaging or bleeding. Because of this health care workers or those caring for the infected are often the first to contract the disease. The current strain in West Africa has a between a 50-90% mortality rate.

The reason Ebola is so dangerous in West Africa is because the countries that have been affected lack even rudimentary health care systems. Doctors are few and far between, nurses are overworked and most hospitals don’t have the most basic of supplies such as clean needles and rubber gloves. Healthcare workers often come into contact with the blood of patients and don’t have the basic necessities on hand to protect themselves. Needles are often reused, not because of poor medical habits but because there is simply no other way.

The suffering in West Africa is truly tragic because it was preventable. “The whole country has been hit by something for which it was not ready,” said the director of control and prevention at Sierra Leone’s Health Ministry. The suffering is catastrophic, the disease has wiped out entire families and left thousands of children orphaned. An article by the New York Times reporter Adam Nossiter focused on this problem in one corner of Sierra Leone.

A small boy, lay curled up under a wooden bed frame, and a nurse explained that “he was in the last stage, vomiting blood.” Outside the building, a ten year old boy propped himself up as best he could against a wall, blood around his eyes, defecating. “A lot of babies are dying here,” said Mohammed Kamara, a soldier guarding the facility.

Despite the magnitude and gravity of the disease in Western Africa, there is no reason to fear a widespread Ebola outbreak in the United States.

How A Tilt Toward Safety Stopped A Scientist’s Virus Research

A recent U.S. government ban has stopped some experiments with dangerous viruses, saying the risks need to be reconsidered.

Although it’s pretty hard to catch Ebola — unless you come in contact with the blood, vomit, saliva or feces or someone with the disease who is presenting symptoms — viruses like SARS and MERS can be spread through the air. It’s this research which has been frozen, says one scientist involved in these studies.

As cases of a worrisome respiratory virus continue to pop up in the Middle East, scientists who study it in the U.S. are struggling to understand how they’ll be affected by a government moratorium on certain kinds of experiments.

Read more at: How A Tilt Toward Safety Stopped A Scientist’s Virus Research, npr.org 11/7/2014

The Centers for Disease Control and Prevention (CDC) has stated that an Ebola outbreak in the United States is extremely unlikely and almost impossible because we have all of the appropriate tools to contain a the spread of the virus.

Many people however, including New Jersey Governor Chris Christie and and New York Governor Andrew Cuomo think the CDC’s regulations regarding Ebola are not strong enough. This has led both states, without the consultation of public health departments or officials, to declare mandatory quarantines for all healthcare workers returning from West Africa. The decision to automatically quarantine health care workers returning form West Africa has been widely condemned by scientists and public health officials who say the measure is counter-productive, not scientifically based and will ultimately discourage health care workers from volunteering to help stem the epidemic in Africa. Cuomo’s and Christies’ decision is a maddening example of how politics can impact public health.

It seems as if the governors have thrown science and reason under the bus and yielded to the public fear fanned by the news media. Ebola is not contagious in individuals unless they present symptoms, which include vomiting, fever, bleeding and diarrhea. The case of Thomas E. Duncan, the Liberian man who died from Ebola in Dallas Presbyterian Hospital on October 8, supports this finding. Two of the nurses who cared for Duncan during the final stages of his illness did indeed contract Ebola, however, the family members who cared for Duncan at home before he was admitted to the hospital did not contract the disease. Duncan’s family had been in very close contact with him while he had a high fever, but not one of them became sick.

Ebola is a very scary disease and we must use science and reason to guide our public policy. The virus is not nearly as contagious as influenza. It is not airborne and the likelihood of getting Ebola is far less than catching the flu this winter. Quarantining health care workers who have gone to West Africa and put their lives on the line is a step backwards. It inflames public anxiety and makes it less likely that resource starved Sierra Leone, Liberia and Guinea will get the people and supplies they need to fight this scourge. The political thinking seems to be “mandatory quarantines couldn’t hurt — and it shows the public that we are doing something.” But unnecessary quarantines are an overreach that could prove to be counter-productive. The New England Journal of Medicine criticized Cuomo and Christie saying, “the governors’ action is like driving a carpet tack with a sledgehammer: it gets the job done but overall is more destructive than beneficial.”

More needs to be done in West Africa to help stem the current epidemic. The US and other countries need to step up their response as does the World Health Organization. Doctors Without Borders has led the fight against the disease since last spring. The U.S should be encouraging and rewarding the brave medical workers who travel abroad to help contain the spread of the disease instead putting them under a virtual house arrest as a reward for their heroic efforts.

The Ebola outbreak in West Africa and the U.S. response to it should serve as a lesson about the value of public health worldwide. Americans should work to strengthen the health care systems in impoverished and developing countries for both selfless and selfish reasons. Sooner or later a disease will emerge from these parts of the world that is far more infectious than Ebola. When it does, the only thing that will stop it is a functioning health care system.

Nyack High School graduate Ben McCarthy is a junior at Hunter College studying pre-med and creative writing. He is also the lead guitarist in the alternative rock band Regret the Hour.