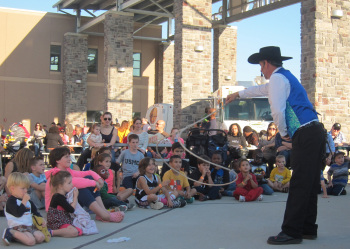 Sample specialty foods from local restaurants, farms and hot sauce and spice companies at the second annual Smoke-N-Fire Food Fest on Oct 11 at Provident Bank Park in Pomona. The event will run from 11a-6p rain or shine. Admission is just $5 per person and a portion of ticket sales will benefit the local charity, Baking Memories 4 Kids.

There will be spicy food eating contests, activities for children, a fire juggler and live music from Blue Sky Band, Curb Side Hustle, John Evans Band, Bossy Frog Band, and other performers.

New City resident and local business owner Kendell Brenner launched the first annual Smoke-N-Fire Food Fest in October 2013. “We were blown away by the interest, the attendance and the excitement that the event generated in its first year,” says Brenner. This year the Smoke-N-Fire Food Fest will have 50 vendors, with even more food, more entertainment and several spicy-eating contests. 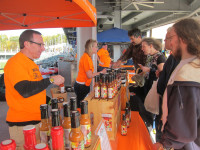 Kendell Brenner is the owner of Chefs2Be (chefs2be.com), a culinary learning center for children as well as a culinary instructor at the Rockland County Career and Technical Education Center in West Nyack, NY and a part-time professor at Dominican College in Orangeburg, NY. Together with his ten-year-old son Jordan, he launched Jordan Brenner’s Hot-Cha WAA-Cha™ Sauce & Spice Co. (jordanssauces.com) in 2012. Brenner is an accredited chef and a graduate of the Culinary Institute of America who earned his MBA from Dominican College.

More information and regular updates on the Smoke-N-Fire Food Fest can be found online at Facebook.com/NYSmokeNFire.