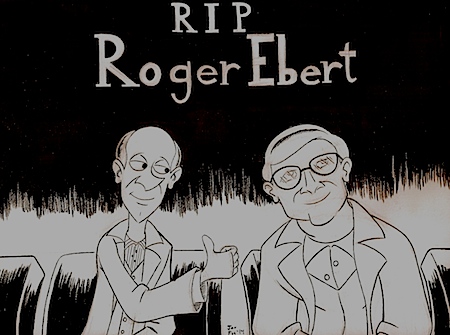 Roger Ebert was famous for infusing parts of his life into his movie reviews, so it should come as no surprise that a documentary about the late critic’s life includes hospital scenes, interviews with family, friends and movie directors as well as some cinematic history. Rivertown Film presents Life Itself on Wed Oct 22 at 8p in The Nyack Center.

It’s a movie about the life of a film critic whose star began to shine brightly after he teamed up with a fellow Chicago film critic, Gene Siskel. More than most movies, it’s fitting to hear what the critics had to say about a movie whose subject was one of their own.

The movie is about cinema history and critical history, writing and reading, drinking and sobriety, religion and doubt, love and sex and marriage and parenthood and labor relations and so many other factors that combined to create Roger Ebert; and it’s about why, even if complete emotional detachment were an achievable goal for any critic of any medium (and I don’t think it is—only that some pretend it is), it’s impossible to achieve when writing about “Life Itself.” Roger was well-known to everyone who cared about cinema, and his work had a deep impact on all of them, including (perhaps especially) those who did not like or respect him and defined themselves against him. — Matt Zoller Seitz, RogerEbert.com, 7/3/2014

Ebert was often described as egalitarian and populist in his approach to movies and life. “Life Itself” opens by citing his definition of cinema as “a machine that generates empathy,” and he was not interested in rarefied or exclusionary approaches to aesthetics. Even if he was writing about Bergman or Bresson, he was writing for the widest possible readership. — Geoffrey O’Brien, NYT 7/4/2014

A life spent at the movies gets the cinematic epitaph it richly deserves in “Life Itself,” documentarian Steve James’ meticulous and intensely emotional portrait of the late Roger Ebert. Given unfettered access to Ebert during what turned out to be the last four months of the venerated critic’s life, James cuts — as in all of his best work — straight to the human heart of the matter, celebrating both the writer and the man, the one inseparable from the other, largely in Ebert’s own words. One can only hope that this CNN Films presentation, a natural for wide fest play, will also end up on the bigscreen, where Ebert himself surely would have wanted it. — Scott Foundas, Chief Film Critic, Variety 1/20/2014